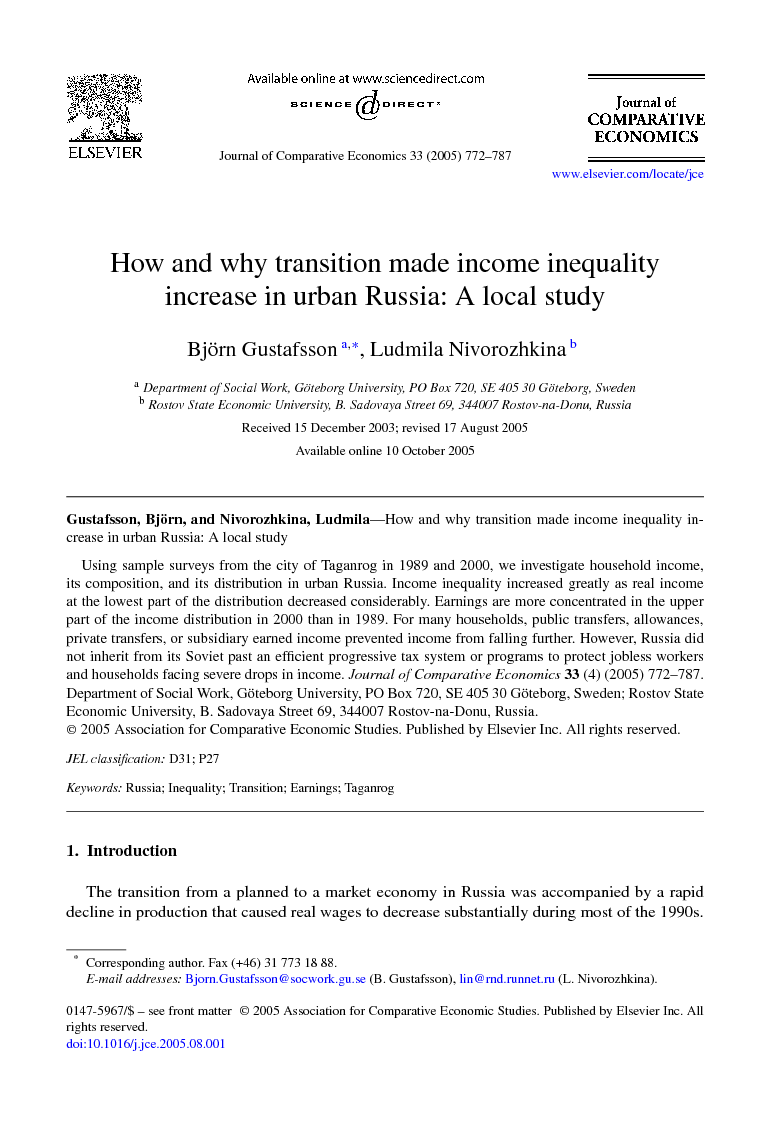 Using sample surveys from the city of Taganrog in 1989 and 2000, we investigate household income, its composition, and its distribution in urban Russia. Income inequality increased greatly as real income at the lowest part of the distribution decreased considerably. Earnings are more concentrated in the upper part of the income distribution in 2000 than in 1989. For many households, public transfers, allowances, private transfers, or subsidiary earned income prevented income from falling further. However, Russia did not inherit from its Soviet past an efficient progressive tax system or programs to protect jobless workers and households facing severe drops in income. Journal of Comparative Economics33 (4) (2005) 772–787.

The transition from a planned to a market economy in Russia was accompanied by a rapid decline in production that caused real wages to decrease substantially during most of the 1990s. Workers were laid off and employed people were not paid on time. In the later part of the 1990s, unemployment developed and became a social problem. For many Russian households, transformation has meant increased difficulty in supporting themselves by earning wages and salaries. To counteract these conditions, households have diversified their income sources. Some workers have been able to get a secondary job; self-employment has increased and time spent in production for private consumption and for earning subsidiary income has increased. Transition also means change from a rigid economic environment, in which the rules of the game were well known to most actors and the outcomes of decisions were relatively easy to predict, to a new environment of constant flux. The first period of transition was a disequilibrium environment characterized by unclear rules for market transactions and more volatile factor rewards. Disorganization meant that the income-generating process became less transparent. Economic success in such an environment is often serendipitous and enjoyed by those able to take advantage of the new possibilities. Therefore, we expect young adults to be able to adjust to the new environment better than older workers. Similarly, people with more education should be able to access and process information more easily and benefit more from new opportunities. An important component of household income in Russia is the social insurance payments. The social insurance system of Soviet Russia consisted of relatively meager pensions for elderly people. Support for families with children was rudimentary and, in a regime that proclaimed full employment officially, unemployment compensation did not exist. Rapidly decreasing production led to an eroding tax base that made it difficult to develop income support programs during the transition. However, a substantial proportion of the voters in Russia are pensioners or other people with low incomes. For a political economy reason, the Russian pension system has been reformed rather than dismantled and local governments and enterprises are under pressure to introduce new systems of income support. In contrast and despite the increased need, a comprehensive, easy to access, and generous system of unemployment benefits has not been introduced and only limited support is provided to families with children. The burden of Russia's transition has not been shared equally. Although the fall in real wages and loss of income is widespread, members in some households have found new economic opportunities and achieved a higher living standard. As a consequence, the distribution of income in Russia is now considerably more unequal than during the Soviet period as Milanovic (1998), Commander et al. (1999) and World Bank (2000) attest. To analyze the changes using circumstances during the Soviet period as a base line, we compare the situation in 2000 to that of 1989.1 In this paper, we use two similar household surveys for the Russian city of Taganrog. The benefit of using a local study is our ability to paint a more detailed and reliable picture of change. The disadvantage with this approach is that we cannot determine to what extent changed spatial differences contribute to the rise in income inequality in Russia, as Fedorov (2002) investigates. To begin, we assess the magnitude of the changes in income inequality and real income at the household level. To analyze the forces causing income inequality to increase, we decompose the change in the Gini coefficient by income components.2 To assess changes in the relation between household and personal characteristics on the one hand and disposable income on the other hand, we estimate income functions. The remainder of the paper is organized as follows. In the next section, we present characteristics of the city, details about the two surveys, and a description of the changes in income inequality during the time period. The results from decomposing income inequality by income source are reported in Section 3. Section 4 analyzes and discusses the effects of personal and household characteristics on income. The final section concludes with a brief summary of our results and their significance.

In this paper, we investigate the composition and distribution of household income for the city of Taganrog to gain insights into changes in income equality in urban Russia. We use a survey of households in 1989 and a follow-up study in 2000 to analyze changes over an eleven-year period starting prior to the collapse of the Soviet Union. We identify the factors responsible for increased income inequality by decomposing the Gini coefficient into five income components. We found that real income decreased considerably for those in the lowest part of the distribution but fewer changes occurred in the middle of the distribution, whereas real income increased somewhat for those at the top. The most important determinant of increased income inequality is the increased concentration of earnings income in the upper part of the income distribution in 2000 compared with 1989. The shift is attributable to the new phenomenon of unemployment, increased dispersion in monthly earnings, a larger dispersion in hours of work among the employed, and an increased incidence of secondary jobs. Basically, the change from a planned allocation to a market allocation of labor during a period of economic decline increased the uncertainty and volatility of household income. Living standards of many households were prevented from falling even further by income from sources other than earnings. Public transfers made up as much as half of the disposable income of households having the lowest two-thirds of disposable income. In 2000, allowances and subsidiary incomes, which originate primarily from the private garden plots, became more important components of income and accounted for remarkably similar proportions of disposable income at different positions in the income distribution. Private transfers affected disposable income in 2000 with the largest share found for those with the lowest and highest incomes. However, information was not collected on this component in 1989 so that no comparison can be drawn across years. Using the 1989 profiles, the expansion of public transfers and allowances contributed to increased income inequality, while subsidiary income was inequality reducing. Although we find three factors contributing to the increase in inequality in Taganrog, we identify no strong, counterbalancing force. In contrast, the distributional consequences of recessions in large welfare states are found to be counteracted by public transfers, e.g. unemployment compensation and income-tested transfers and by a progressive income tax system, as Gustafsson and Palmer (2002) describes. Hence, we conclude that the rapid increase in income inequality at the household level in Taganrog, and by extension Russia, during the transition is due primarily to the lack of institutions. Russia did not inherit a tax system that allowed efficient redistribution of income, nor did it inherit systems for protecting jobless workers and households facing severe decline in income. In the Soviet period, we find that a household's disposable income in Taganrog depended greatly on the number of household members working. However, this relationship became considerably weaker during the transition and higher education of the household head generated a much larger premium than in the pre-transition period. Our study of income distribution and its changes in Taganrog during transition has an important limitation. By comparing only two points in time, we cannot make any inferences about the time profile of changes or predict future developments. If many of our observed changes in the income distribution are due to people with entrepreneurial skills taking advantage of new opportunities, we would conclude that most of the changes took place in the beginning of the 1990s and no further changes will occur in Taganrog. However, the available data for Russia on the time profile of changes in income inequality is not informative. Thus, continued monitoring of the distribution of income in Taganrog should provide new insights into the changes in income inequality in Russia.