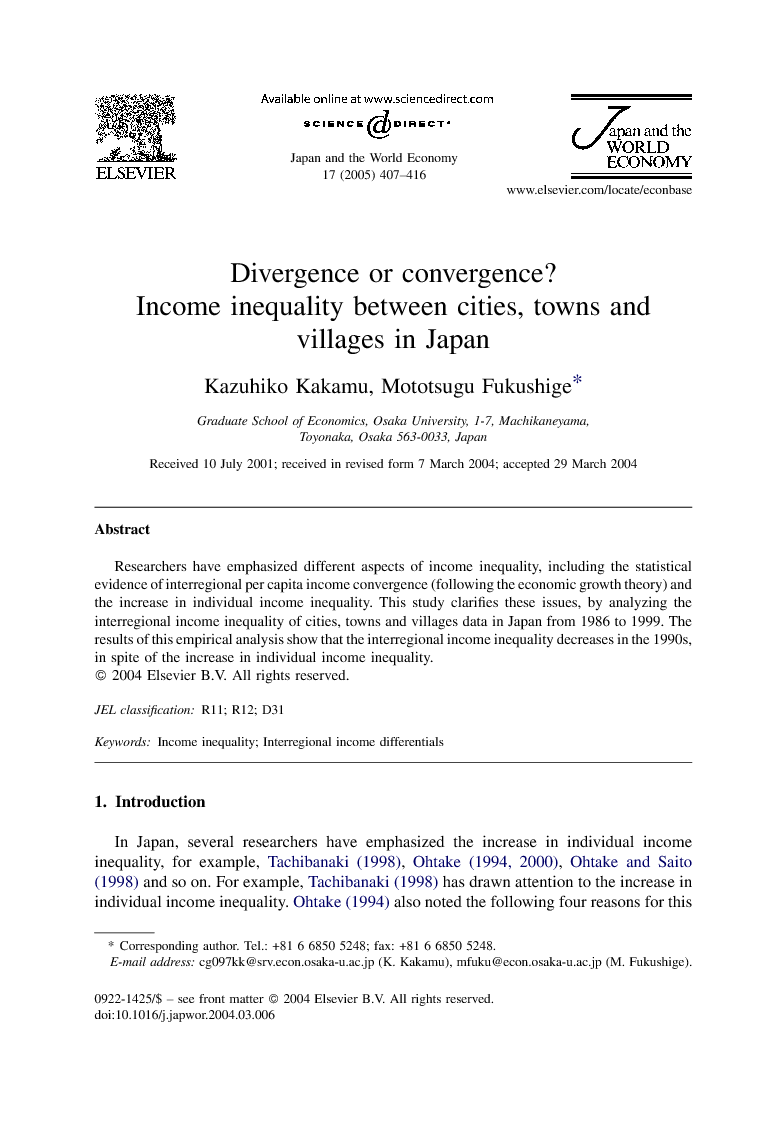 In Japan, several researchers have emphasized the increase in individual income inequality, for example, Tachibanaki (1998), Ohtake, 1994 and Ohtake, 2000, Ohtake and Saito (1998) and so on. For example, Tachibanaki (1998) has drawn attention to the increase in individual income inequality. Ohtake (1994) also noted the following four reasons for this increase in the 1980s. First, family income differentials have grown due to the aging of the population. Second, wage differentials have grown within the same age and between the ages1 simultaneously. Third, the inequality in asset distribution has increased due to the rising of land prices in the second half of the 1980s. Fourth, progressivity in the tax system has weakened because of the tax reform in the second half of the 1980s. Ohtake (2000) and Ohtake and Saito (1998) have pointed out that the rapid aging of the population has caused an increase in the 1990s.2 On the other hand, Barro (1991) says that the levels of GDP per capita in poorer countries have caught up with those in richer countries. For example, Barro (1991) examines the convergence of the GDP per capita from the data of 98 countries. Moreover, Barro and Sala-i-Martin (1992) examines the convergence of the GDP per capita in Japan and the US, and confirms that the level of GDP per capita converges to the same income level even throughout prefectures and states. Although the increase in individual income inequality is common knowledge in Japan, does the interregional income inequality converge? Following the results of Barro and Sala-i-Martin (1992), individual income converges to the same level, and interregional income distribution flattens as in Fig. 1 from DA to DB, however broadly, there is an individual income distribution shift from DB to DA. This paper examines interregional income inequality in Japan, using city, town and village data from 1986 to 1999.3 The paper is organized as follows. Section 2 explains the dataset and income inequality measure proposed by Atkinson (1970). Section 3 analyzes the interregional income inequality in Japan, by region and by prefecture. Finally, Section 4 concludes the paper and discusses further research.