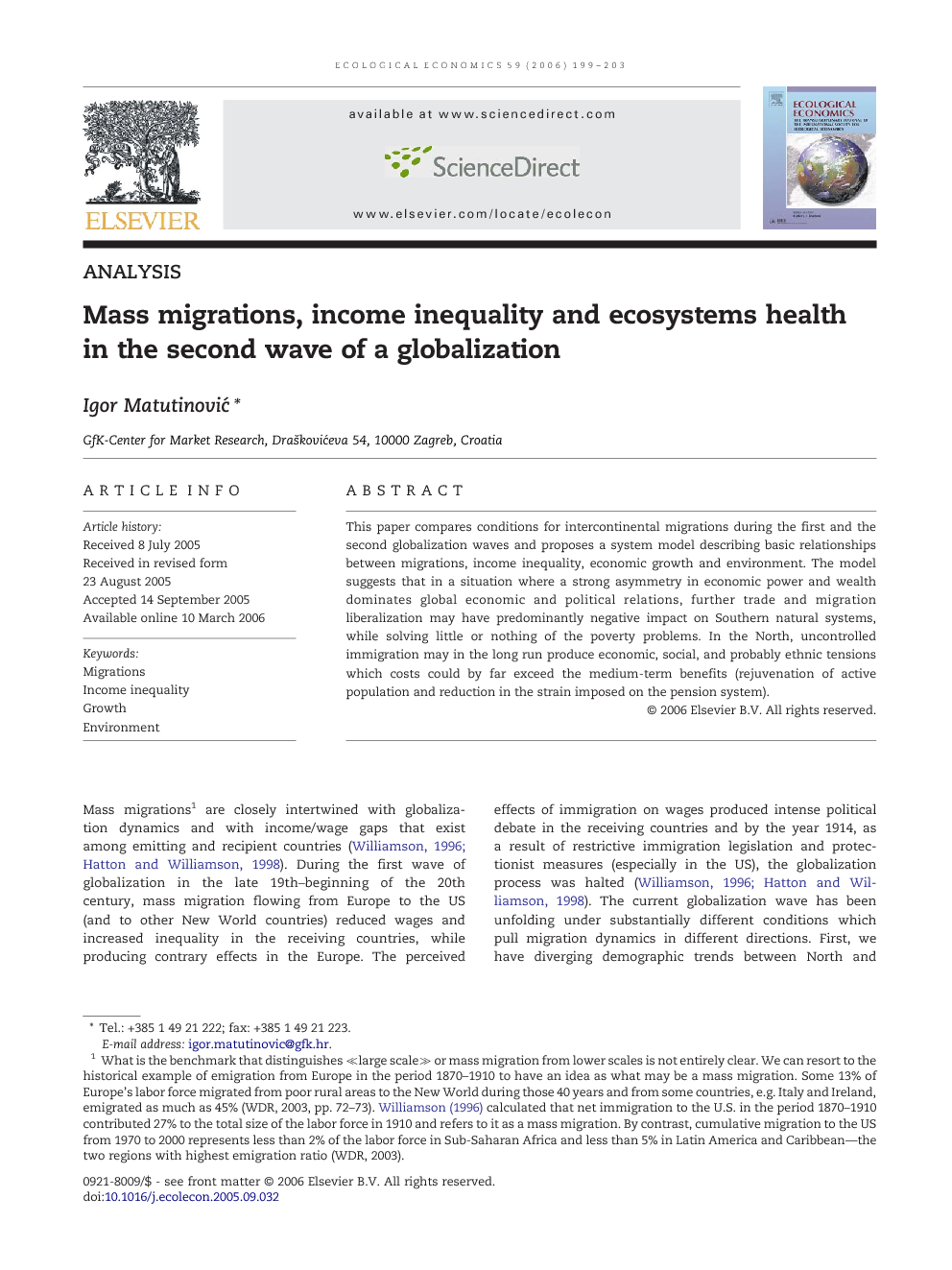 This paper compares conditions for intercontinental migrations during the first and the second globalization waves and proposes a system model describing basic relationships between migrations, income inequality, economic growth and environment. The model suggests that in a situation where a strong asymmetry in economic power and wealth dominates global economic and political relations, further trade and migration liberalization may have predominantly negative impact on Southern natural systems, while solving little or nothing of the poverty problems. In the North, uncontrolled immigration may in the long run produce economic, social, and probably ethnic tensions which costs could by far exceed the medium-term benefits (rejuvenation of active population and reduction in the strain imposed on the pension system).

In the present situation where a strong asymmetry in economic power and wealth dominates global economic and political relations, further trade and migration liberalization may have prevailingly negative impacts on Southern natural systems, while solving little or nothing of the poverty problems. In the North, uncontrolled immigration would eventually produce economic, social, and probably ethnic tensions with costs that may by far exceed the benefits (rejuvenating the active population and reducing the strain on the pension system). Consider also the end of the oil paradigm, which will most probably occur within this century (Youngquist, 1999), which will halt (at least temporarily) economic growth in the North with the unavoidable consequence of rising unemployment. This may create a very competitive labor market and, consequently, favorable conditions for ethnic job discrimination, thus adding fuel to social tensions that are likely to worsen under a deteriorating economic situation. Consequently, I endorse the view of Herman Daly (2004) that the “world community should be viewed as a “community of communities,” and not as a melting pot of different cultures and economies. By the same token, international trade and not globalization (Daly, 1999) is how the exchange of goods should be organized among countries to minimize social and environmental costs. Consequently, there is no warrant for advocating liberalized immigration policies comparable to that in the US during the first globalization wave. As with the international movement of goods and capital, immigration should be controlled to a degree that reflects each recipient country's interests. Robert Ayres (2004b) argued that, while controlled immigration may be a short-term, partial solution to the problem of ageing populations in the North, it would not significantly benefit the South. He proposes, among other things, more development aid and redirection of private investments from the exploitation of natural resources to other areas. Daly (2004) suggested that small grants accompanied by free transfer of knowledge and technology should provide better help to the South than liberal immigration policies. He stated that “The real solution to the South's problem is for those countries to lower their birth rates and to put their working age population to use at home producing necessities for the home market” (Daly, 2004). These proposed solutions appear to be more efficient and far sighted than liberal immigration policies. We might just remind ourselves in this context of the old and never realized idea of the (large-scale) transfer of labor-intensive, “intermediate technologies” to the Southern economies (Schumacher, 1973). Wide adoption of labor-intensive intermediate technologies in the South would raise local productivity and therefore reduce pressure on ecosystems by the local population, especially in marginal lands. It would create more jobs locally, reduce poverty, and thus relax the pressure of the rural–urban migration, and consequently, on international migration as well. In the process of the adoption of intermediate technologies further positive effects may come to be realized, like a faster demographic transition because of a higher economic efficiency resulting from productivity gains, better employment opportunities, and a more diversified economic growth. We may expect also that traditional socioeconomic arrangements (cultural diversity) would be better preserved compared to the current situation, and this would positively influence the preservation of ecosystems. However, if this and similar proposals are to become effective, considerable systemic changes in the world economy and especially in its Northern part would have to happen in parallel. Robinson and Tinker (1997) propose “dematerialization and resocialization policy wedges” aimed at simultaneously transforming the technological and behavioral spheres of industrialized societies.7 Any such polices, which are aimed at reconciliation of ecological and economic priorities in the modern world, would be dependent on transformations of values and institutions (Shi, 2004). This transformation may require much more than Western societies are ready today to accept—some of the requisite institutional transformations may be as radical as to be incompatible with the market economy (Gowdy, 1994). Therefore, it remains an open question whether this and similar policies are viable under the prevailing neo-liberal paradigm. Or to put it differently, perhaps we must first achieve the paradigm shift before any institutional and policy change can be put to work in a systemic way. It is only in this wider context that we may hope to find long-term solutions for poverty, environmental degradation and international mass-migration problems.