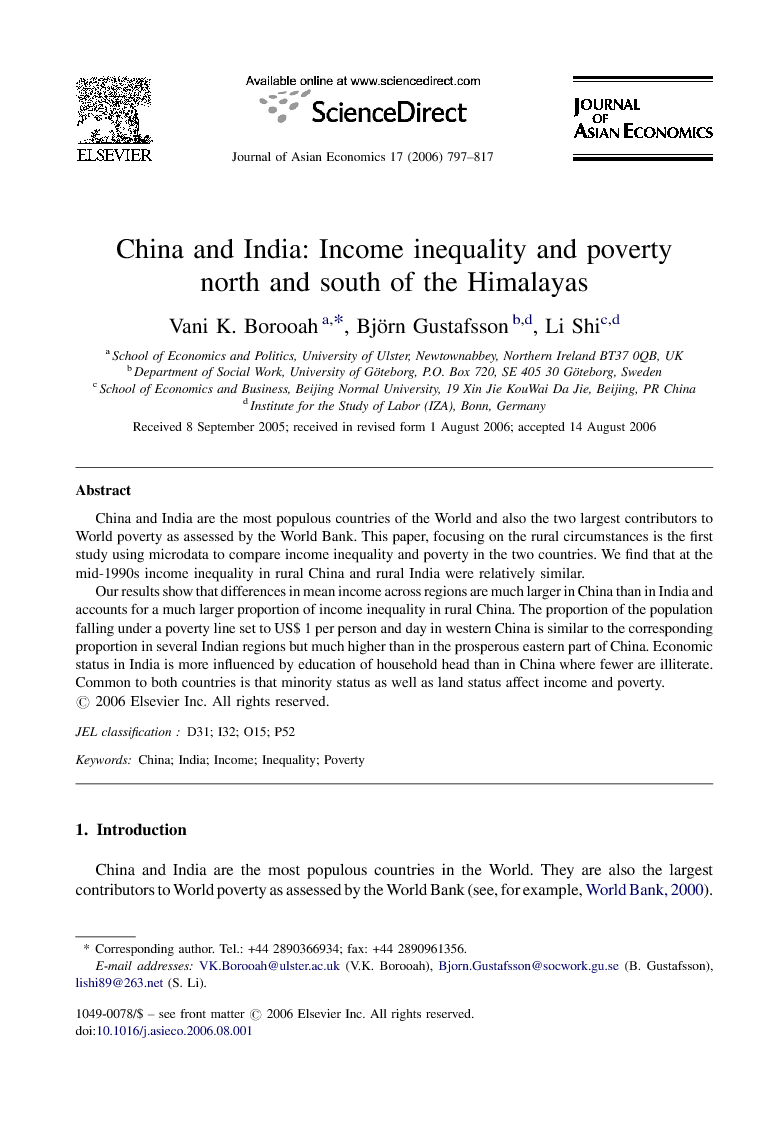 China and India are the most populous countries of the World and also the two largest contributors to World poverty as assessed by the World Bank. This paper, focusing on the rural circumstances is the first study using microdata to compare income inequality and poverty in the two countries. We find that at the mid-1990s income inequality in rural China and rural India were relatively similar. Our results show that differences in mean income across regions are much larger in China than in India and accounts for a much larger proportion of income inequality in rural China. The proportion of the population falling under a poverty line set to US$ 1 per person and day in western China is similar to the corresponding proportion in several Indian regions but much higher than in the prosperous eastern part of China. Economic status in India is more influenced by education of household head than in China where fewer are illiterate. Common to both countries is that minority status as well as land status affect income and poverty.

China and India are the most populous countries in the World. They are also the largest contributors to World poverty as assessed by the World Bank (see, for example, World Bank, 2000). However, although they are on the same continent, China and India differ in their historical experience and their institutional arrangements and this leads to substantial differences in how households and their members fare in the two countries. The overall purpose of this paper is to compare income inequality and poverty among rural residents in China and India in the mid-1990s. We ask whether, and how, income inequality and poverty differ between the rural areas in the two countries. Since average income in China was higher than in India in the middle of the 1990s, we expect to be able to confirm that poverty, defined as living in a household whose income was less than the income associated with a ‘poverty line’, was more extensive in rural India than in rural China. The main purpose of the paper is to compare how the region of residence in a country, as well as household characteristics – such as the educational level of the household head, access to land and minority–majority status – affected the income and poverty status of persons in the two countries. China's transformation towards a market economy has had a very clear spatial character with the eastern part leading prosperity in China and the western part lagging behind; this has led to substantial regional disparities. In contrast, restrictions on geographical mobility have been less stringent in India and, in the mid-1990s its labour market was more developed than of China. While we expect rural India to be more egalitarian than China in terms of regional disparities, we might expect China to be more egalitarian than India when the populations of the two countries are disaggregated according to household characteristics. First, the income premium to education has been lower in rural China than in rural India. This is for several reasons: China's education policy during the egalitarian époque resulted in a relatively small number of workers without any education while, in India, the number of workers without any education has been considerably larger; the demand for highly educated labour in China is very much confined to its urban areas. Second, the ethnic minority–majority dimension can be expected to play a larger role in India than in China. Ethnic minorities in China make up about 9% of its population. Although persons from minority groups are economically disadvantaged in both countries, in China this is very much related to they being over-represented in the western part of the country which has benefited less from economic growth than the eastern part. If one defines the minority group in India as consisting of persons who are ‘marginalised’ relative to others, then Muslims and the ‘untouchable castes’ (Scheduled Castes and Scheduled Tribes) fall into this group and nearly 30% of India's population fall into the minority category (Borooah, 2005). Third, for historical reasons many rural households in India are landless while a few are wealthy landowners. In contrast, almost all households in rural China have user rights to lands and, as a social category, landowners disappeared half a century ago. However, while, compared to India, land is equally distributed in China, access to land, and particularly to irrigated land, varies from province to province, county to county, and even from household to household. Many cross-country comparisons of income distribution and poverty using microdata have been reported in the literature. However, such studies typically refer to industrialised countries. There are many studies comparing China and India from various aspects. However, to our knowledge before this study no one has compared income distribution and poverty in China and India using microdata. The paper is organised as follows: the next section (Section 2) provides an institutional background to the analysis reported in the subsequent sections. The datasets used for the analysis are described in Section 3. Results on income inequality are reported and discussed in Section 4 while Section 5 presents results on poverty. Section 6 summarises the findings and concludes the paper.

In this paper, we compared, using microdata for both countries, income inequality and poverty in the rural parts of China and India. To the best of our knowledge, such analysis has not before been carried out for the two countries. We found that while average income in (rural) China was higher than in (rural) India, rural income inequality in the two countries was similar. Consequently, the fact a larger proportion of the Indian rural population was below the (common purchasing power) poverty line than in China was thus driven by differences in mean income between the countries. The main conclusion of the paper is that although income inequality in rural China and rural India were similar, inequality and poverty were differently structured in the two countries. China displayed larger regional differences in mean income and poverty than India. Seen from the perspectives of the level of mean income, and from that of the risk of being poor for members of a household with given characteristics, the western part of China had more in common with the Indian regions than with the wealthy eastern part of China. For example, as much as about one-fifth of income inequality in rural China would disappear if mean incomes in the three Chinese regions were the same, without any change in income inequality within the regions. Rural poverty in China is concentrated in its western region; on the other hand, the poor in India are more evenly spread across its regions. While rural China is more unequal than India along the regional dimension, the opposite applies in the context of the educational level of household heads. A considerably smaller proportion of the Chinese respondents were illiterate compared to their Indian counterparts. Our results show a poorly educated household head was a much stronger predictor of low household income and high poverty in India than in China. While income inequality in India would reduce by almost 10% if – without any change in within-group inequality – the different educational groups had the same mean income, the corresponding reduction in China would be only 1%. India has a much larger proportion of its population belonging to the ‘minority’ group, as we have defined it. Therefore, the minority–majority dimension is more important in India than in China. Most of China's poor belong to the Han majority while most of India's poor are Muslims or belong to the Scheduled Castes/Tribes. Although our study found that the average minority–majority income gap in China and India were similar in magnitude, the results from our multivariate analysis indicated that much of the minority–majority divide in China was due to the fact that China's minority population was located in its less developed western region. In India there was evidence of the unfavourable treatment of minority group persons living in the same location as persons from the majority group. While Chinese rural households aiming to escape poverty had a strong incentive to emigrate from the western region (and even stronger incentives to migrate to urban areas), rural households in India had a strong incentive to invest in education. Our results also showed that, in both countries, households had incentives to improve their land status. That meant being a land owning household in India and having access to irrigated land in China.