عنوان انگلیسی
Why has income inequality in Thailand increased?: An analysis using surveys from 1975 to 1998
دانلود فوری مقاله + سفارش ترجمه 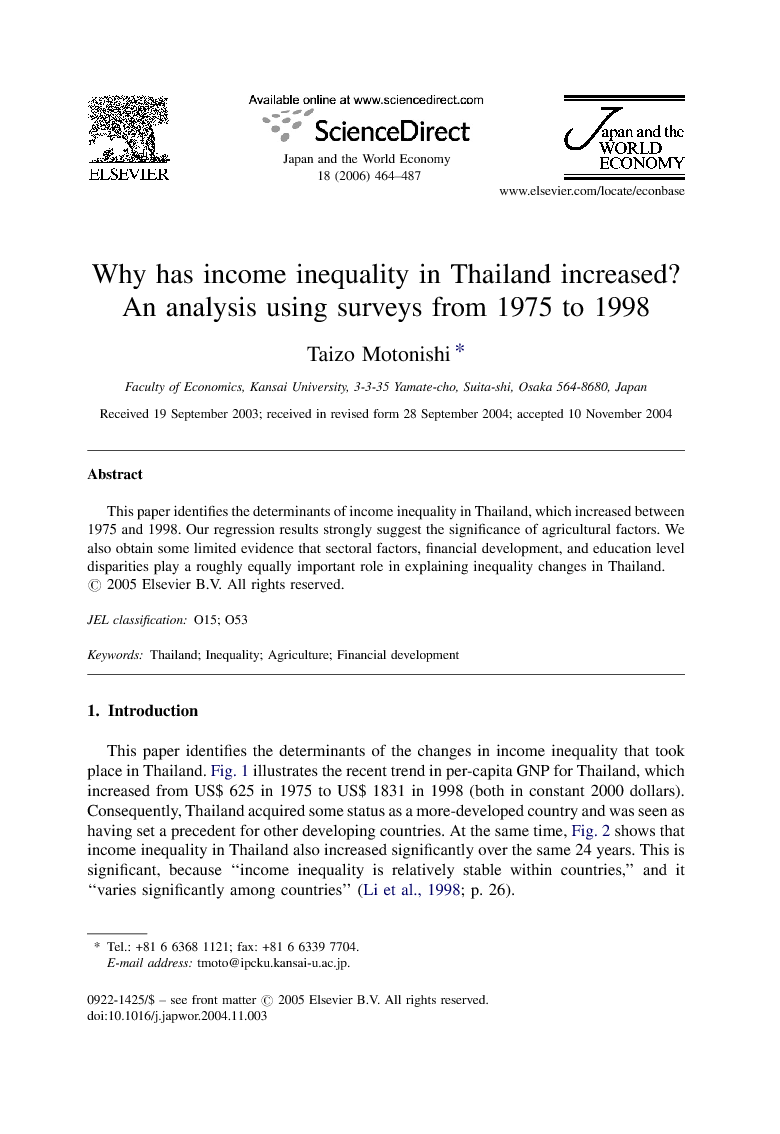 This paper identifies the determinants of income inequality in Thailand, which increased between 1975 and 1998. Our regression results strongly suggest the significance of agricultural factors. We also obtain some limited evidence that sectoral factors, financial development, and education level disparities play a roughly equally important role in explaining inequality changes in Thailand.

This paper identifies the determinants of the changes in income inequality that took place in Thailand. Fig. 1 illustrates the recent trend in per-capita GNP for Thailand, which increased from US$ 625 in 1975 to US$ 1831 in 1998 (both in constant 2000 dollars). Consequently, Thailand acquired some status as a more-developed country and was seen as having set a precedent for other developing countries. At the same time, Fig. 2 shows that income inequality in Thailand also increased significantly over the same 24 years. This is significant, because “income inequality is relatively stable within countries,” and it “varies significantly among countries” (Li et al., 1998; p. 26). While the incidence of poverty in Thailand decreased as a result of its economic growth (Deolalikar, 2002; Kakwani and Krongkaew, 2000), the coincident increase in income inequality remains problematic from the perspective of the policy goal of fairness. In addition, some studies have found significant effects of inequality on economic growth.1 Therefore, it is important to clarify the determinants of the recent increase in inequality in Thailand. Kuznets (1955) pointed out the importance of considering the agricultural sector for understanding changes in income distribution during the process of economic development. His insight is even more important because it helps to explain the changes in the distribution of income in Thailand. Studies of income distribution in Thailand have stressed the importance of the role of the agricultural sector (Deaton, 1989, Ikemoto, 1991 and Krongkaew et al., 1996). While the share of the agricultural sector in the total GDP decreased (from 27% in 1974 to 12% in 1998), the labor force in the agricultural sector still accounted for 51% of the total labor force in 1998. We used longitudinal data from 24 years and nine national surveys for 13 regions, taken from Thailand's Household Socio-Economic Survey (HSES). For developing and more-developed countries, it is not always easy to obtain detailed regional data to identify the determinants of income inequality during development. The Thai HSES is one of the few exceptions. The regression results suggest the significance of agricultural factors, although we obtained limited evidence that sectoral factors (which include agricultural factors), financial development and education level disparities played a roughly, equally important role in explaining inequality increases in Thailand. The effects of financial development are of interest, because consolidation of financial markets is on the policy agenda of many developing countries. Note that the effect of financial development on income distribution is theoretically indeterminate. However, the regression results suggest that financial development in Thailand may have tempered the inequality increase. Deolalikar (2002) analyzed poverty in Thailand, focusing on “poverty incidence“. Deolalikar regressed poverty incidence on income distribution and other determinants, using provincial data, and found that inequality had a negative effect on poverty incidence, both directly and via low growth rates. Using a nonparametric approach, Deaton (1989) showed that higher rice prices benefited Thailand's rural households in all income brackets, although their study did not consider other determinants of inequality. Ikemoto (1991) provided a detailed, elaborate analysis of income distribution in Thailand during the 1960s, 1970s and 1980s, although the study focused more on a precise description of the changes in income distribution than on clarifying the determinants of these changes via econometric investigation. Although the insight provided by Kuznets (1955) provoked a substantial number of cross-country empirical studies, there is little agreement as to the determinants of inequality. Many of these studies tested the effect of per-capita GDP on inequality (Papanek and Kyn, 1986, Anand and Kanbur, 1993, Jha, 1996 and Osaka, 2000). Others utilized relative variables from the agricultural and nonagricultural sectors (Ahluwalia, 1976 and Bourguignon and Morrisson, 1998). Li et al. (1998) did not test Kuznets’ hypothesis directly, but they did try to identify the determinants of inequality by focusing on factors related to political economy and capital market imperfections. Note, however, that these cross-country analyses had their own set of problems. First, Kuznets’ hypothesis dealt with intertemporal relationships, and so it is not apparent whether this cross-country evidence also applies to a country's course of development. Second, inequality data are generally not strictly comparable across countries, owing, for example, to differences in the definitions used (e.g., whether income or expenditure, or household or individual). The “secondary” datasets (e.g., the dataset of Deininger and Squire, 1996) used in most of the cross-country analyses suffer from this same problem.2 Third, country-specific determinants of inequality, such as the degree of civil liberty (Li et al., 1998) or trade protection (Bourguignon and Morrisson, 1990), are very difficult to measure and likely to be measured erroneously. Our within-country analysis makes overcoming these problems a priority. Only a limited number of empirical studies have examined intertemporal inequality changes, largely because of the difficulty in obtaining longitudinal data on the income distributions of developing countries. Estudillo (1997) analyzed data for the Philippines for 1961–1991 and found a significant role for urbanization and education. In addition, Karunaratne (2000) found age to be an important determinant in Sri Lanka between 1963 and 1987. Further, Papanek and Kyn (1986), using a small number of longitudinal observations for 83 countries, found only partial support for the intertemporal Kuznets’ hypothesis. Finally, Deininger and Squire (1998), exploited the longitudinal aspects of their earlier dataset (Deininger and Squire, 1996), and rejected the existence of a contemporaneous link between inequality and income levels. The remainder of this paper is structured as follows. Section 2 introduces indices of income inequality and presents a broad overview of the changes in income distribution in Thailand by exploiting the decomposability of a distribution index. Section 3 explores the determinants of income inequality and details the empirical framework. Section 4 provides the regression results and Section 5 concludes.

Kuznets (1955) wrote, “What about the trend toward greater inequality due to the shift from the agricultural to the nonagricultural sectors? In view of the importance of industrialization and urbanization in the process of economic growth, their implications for trends in the income distribution should be explored—even though we have neither the necessary data nor a reasonably complete theoretical model”. (p. 12) Although we now have the necessary data and this study reconfirms the importance of sectoral factors, a theoretical model capturing the sectoral factors of a developing economy has yet to be developed in full. This study shows some limited evidence that the variables related to sectoral shifts in the economy, i.e., the agriculture–nonagriculture disparity and household income, played a significant role in increasing income inequality. While education level disparities also contributed to increasing inequality with somewhat smaller magnitude, financial development had an effect in the opposite direction, which roughly cancels out the effect of education level disparities. We must admit that there is room for further investigation of the causes of the observed inequality increases in Thailand. Our estimations allowing for AR(1) disturbances suggest that the estimated effects of income, financial development and education level disparities may be exaggerated by the omission of the asset variable from the regression equations. The utilization of precise asset data is left as a future research task.