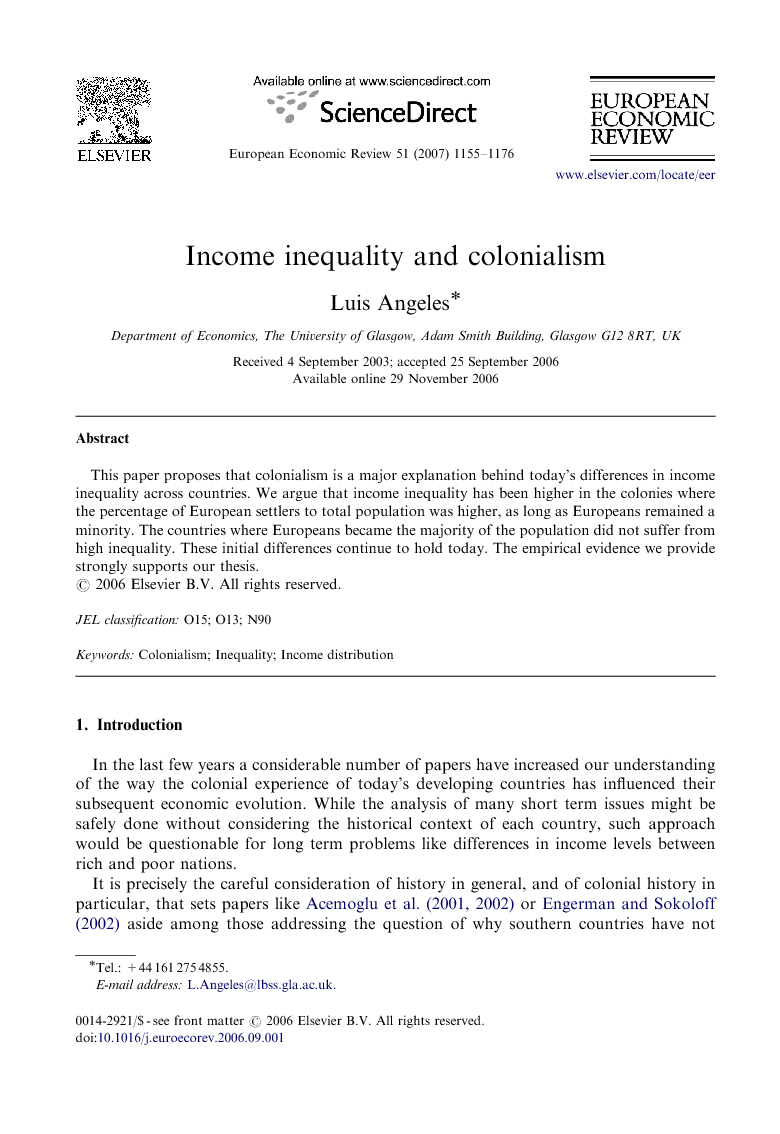 This paper proposes that colonialism is a major explanation behind today's differences in income inequality across countries. We argue that income inequality has been higher in the colonies where the percentage of European settlers to total population was higher, as long as Europeans remained a minority. The countries where Europeans became the majority of the population did not suffer from high inequality. These initial differences continue to hold today. The empirical evidence we provide strongly supports our thesis.

Our paper's main point is that colonial history is a major explanatory factor behind today's large differences in inequality among the world's countries. We have reviewed the different colonial experiences of the last five centuries and have classified them in three broad categories. Of these three, we argued that one clearly produced and sustained highly unequal societies. This high inequality group is the one where colonialism brought into the country an amount of European settlers whose number was considerable but still inferior to that of the local population. This minority was able to concentrate most of the countries’ income in their hands, mainly by excluding the rest of the population from owning land or mining resources. Moreover, and with the exception of Algeria, it was this minority who took all political power once these countries became independent. This allowed high inequality to remain a characteristic of these countries up to our times. We believe that the empirical evidence strongly advocates our view. The number of European settlers as a percentage of total population has clearly a statistically significant and an economically substantial effect on inequality. The effect is robust to the inclusion of a large number of control variables, including controls for climate and some natural endowments, dummies for Latin America and sub-Saharan Africa and for the identity of the colonial power. While some aspects of the econometrical work can always be changed, the results seem to be so consistent that we can be confident in them. One might be tempted to infer, given the above conclusions, that European settlement was a negative phenomenon for the countries where it took place (excluding the four cases of Australia, Canada, New Zealand and the U.S.) since the society that came out of these countries was highly unequal. In addition, one could add that such a message is in contradiction with the results of Acemoglu et al. (2001), where more European settlements have rather positive consequences since they are associated with better institutions and thus with a higher level of GDP per capita. Such a conclusion would not be correct since there is no contradiction whatsoever between the fact that Settler colonies became highly unequal and the one that these same colonies achieved a higher level of production per capita than Peasant ones. This relative economic success was precisely the result of the European settlers’ growth record. By their cultural background they were able to put at least partially in place the technology and institutions that made the economic superiority of Europe and the New Europes. It should also be kept in mind that the higher inequality of the former Settler colonies does not imply that the poorer majority of these countries is less well-off in absolute terms than the people from the less unequal Peasant colonies. Inequality is a relative concept and it does not inform us about the absolute level of GDP per capita. There exists a trickle-down effect in the former Settler colonies since the rich minority demands and consumes many services provided by the poor and in this way makes them profit at least in part of their well being. If this effect is strong enough then it might be better to be poor in a former Settler colony than in a former Peasant colony, at least in what concerns absolute levels of income. A final comment on the “Kuznets’ hypothesis” is also in order. Our paper tells us that the colonial experience of developing countries is of the highest relevance when analyzing inequality issues while the level of development, measured by an indicator like GDP per capita, is not. The empirical record refutes the “inverted-U” relationship between inequality and income while it supports the one between inequality and European settlement. It might then come as a surprise that some intellectual support for the ideas we present here can be found in the same paper of 1955 where Simon Kuznets formulates his famous hypothesis. Kuznets had certainly noted that his analysis was not appropriate for every country in the world and that there was something particular about some colonized regions. In Kuznets (1955, p. 21) we read that he is excluding of his analysis countries that are characterized by “... large native populations with small enclaves of nonnative, privileged minorities, e.g. Kenya and Rhodesia, where income inequality, because of the excessively high income shares of the privileged minority, is appreciably wider than even in the underdeveloped countries cited above.” The problem is that this case of a small enclave of non-native, privileged minority is far from being an exception and concerns an important number of developing countries in the world. Kuznets, after all, had seen it right.