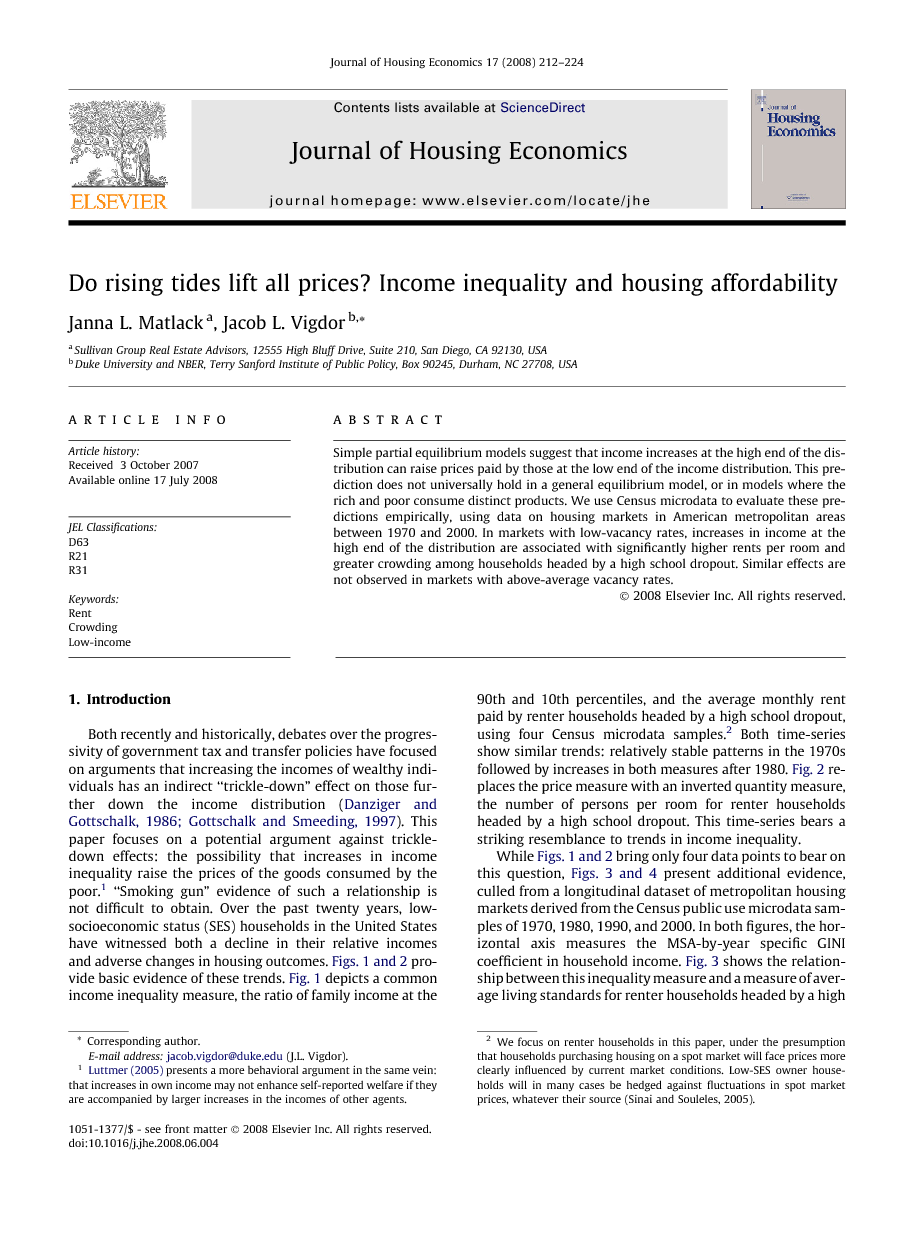 Simple partial equilibrium models suggest that income increases at the high end of the distribution can raise prices paid by those at the low end of the income distribution. This prediction does not universally hold in a general equilibrium model, or in models where the rich and poor consume distinct products. We use Census microdata to evaluate these predictions empirically, using data on housing markets in American metropolitan areas between 1970 and 2000. In markets with low-vacancy rates, increases in income at the high end of the distribution are associated with significantly higher rents per room and greater crowding among households headed by a high school dropout. Similar effects are not observed in markets with above-average vacancy rates.

Both recently and historically, debates over the progressivity of government tax and transfer policies have focused on arguments that increasing the incomes of wealthy individuals has an indirect “trickle-down” effect on those further down the income distribution (Danziger and Gottschalk, 1986 and Gottschalk and Smeeding, 1997). This paper focuses on a potential argument against trickle-down effects: the possibility that increases in income inequality raise the prices of the goods consumed by the poor.1 “Smoking gun” evidence of such a relationship is not difficult to obtain. Over the past twenty years, low-socioeconomic status (SES) households in the United States have witnessed both a decline in their relative incomes and adverse changes in housing outcomes. Fig. 1 and Fig. 2 provide basic evidence of these trends. Fig. 1 depicts a common income inequality measure, the ratio of family income at the 90th and 10th percentiles, and the average monthly rent paid by renter households headed by a high school dropout, using four Census microdata samples.2 Both time-series show similar trends: relatively stable patterns in the 1970s followed by increases in both measures after 1980. Fig. 2 replaces the price measure with an inverted quantity measure, the number of persons per room for renter households headed by a high school dropout. This time-series bears a striking resemblance to trends in income inequality. While Fig. 1 and Fig. 2 bring only four data points to bear on this question, Fig. 3 and Fig. 4 present additional evidence, culled from a longitudinal dataset of metropolitan housing markets derived from the Census public use microdata samples of 1970, 1980, 1990, and 2000. In both figures, the horizontal axis measures the MSA-by-year specific GINI coefficient in household income. Fig. 3 shows the relationship between this inequality measure and a measure of average living standards for renter households headed by a high school dropout in that MSA and year. This measure, which we term residual income, equals annual family income (in constant 2000 dollars) less annual gross rental payments. Fig. 3 shows a significant negative relationship: as income inequality grows, the residual income of households headed by a less-educated individual declines. Fig. 4 relates GINI coefficients to a measure of crowding, average persons per room, for the same set of households. In this case, crowding increases significantly as income inequality increases. The time-series and cross-sectional correlations between income inequality and the housing outcomes of the poor can be criticized on numerous fronts. The composition of the less-skilled population changed over time, largely because of immigration. There are no efforts here to adjust for the quality of a housing unit. Because of these concerns, this evidence by itself should not be assigned any causal interpretation. It does, however, motivate this paper’s basic research question: whether increases in another household’s income worsen one’s own consumption outcomes, holding own income constant.3 The hypothesis that increases in the income of the wealthy cause housing affordability problems for the poor is not novel. It is proposed by Rodda (1994) and discussed by Vigdor (2002). This paper contributes a more formal modeling of the potential relationship of the phenomena and more rigorous empirical tests using repeated cross-sectional and longitudinal data. The answer to this question will be of interest to scholars and policy-makers concerned with both inequality and housing affordability. Evidence that inequality raises prices for the poor, controlling for their own income, would argue against the “trickle-down” economic hypothesis. Evidence of a link between income inequality and housing affordability would also complement existing literature on the demand and supply-side determinants of housing prices (Glaeser and Gyourko, 2003, Greulich et al., 2004, Gyourko et al., 2004, Glaeser et al., 2005a, Glaeser et al., 2005b, Quigley and Raphael, 2004 and Saiz, 2003). We begin the paper with a brief discussion of these two literatures in Section 2. Section 3 presents two basic housing market models. In both models, consumers are disaggregated into two types, high- and low-SES. The first model, which considers the housing market in partial equilibrium, suggests that any increase in the incomes of the wealthy will lead to some combination of higher expenditures and lower consumption for the poor, so long as the supply of housing is less than perfectly elastic. The second model, which focuses on the housing market in general equilibrium, produces more ambiguous conclusions, particularly in the case where changes in production technology that lead to greater income for high-skilled labor also influence the productivity of housing-related capital. Given this theoretical ambiguity, we turn to empirical analysis to determine whether higher income for the wealthy is associated with poor housing market outcomes for low-skilled workers. Section 4 describes our data and methodology, and Section 5 presents our results. Using Integrated Public Use Microdata Samples (IPUMS) from the 1970, 1980, 1990, and 2000 Census enumerations, we examine the empirical association between rising income inequality and the housing consumption of the poor. In metropolitan areas with greater income inequality, households headed by a high school dropout live in more crowded conditions and report having less residual income. The residual income effect can largely be explained by a direct relationship between income inequality and the earnings of the poor; the crowding effect persists after controlling for own income, however. Differentiating metropolitan areas by their contemporaneous housing vacancy rates, we show that in tight housing markets, greater inequality, particularly increases in the 90th percentile of the income distribution relative to the median and 10th percentile, predict higher rent payments and greater crowding for households headed by a high school dropout. These effects are uniformly weaker in areas with above-average vacancy rates. Section 6 discusses these results and concludes the paper.

Do rising tides lift all boats? If raising the income of the wealthy increases the prices that the poor must pay for certain necessities, then it becomes more difficult to argue in favor of policies that exacerbate inequality on the grounds that they at least do not lower the incomes of the poor. The notion that increases in the incomes of others can reduce an individual’s subjective well-being has been long considered by psychologists and economists (Luttmer, 2005). To this point, less attention has been paid to the possibility that objective indicators of well-being, namely consumption levels, may suffer as well. The theoretical discussion in this paper makes clear that the simple partial equilibrium take on this question can be quite misleading. Product differentiation in the housing market, or general equilibrium impacts of increased productivity on the rich on the return to forms of capital used to produce housing, could easily break the simple link shown in Fig. 5. Our empirical analysis confirms that inequality is not universally associated with higher housing costs or reduced consumption by the poor. Instead, impacts are concentrated in those metropolitan areas where the elasticity of supply is small, at least locally. For this reason, the study of demand-side determinants of housing affordability problems should not be conducted in isolation from study of the supply-side. In the United States, tight housing markets tend to be those where incomes are rising rapidly at the high end of the distribution, while incomes at the low end trend upward only slowly if at all. In these areas, the poor have experienced greater crowding, higher quantity-adjusted rents, and have less income available for savings or other consumption once they have covered their housing costs. In housing markets with greater slack, the impact of inequality appears more benign. Holding one’s own income constant, a decline in the income of individuals like you appears to be a favorable thing. Do price effects negate the impact of “trickle-down” effects? The answer appears to be “sometimes.” The key to making rising tides lift all boats appears to be ensuring that there are more than enough boats to go around.