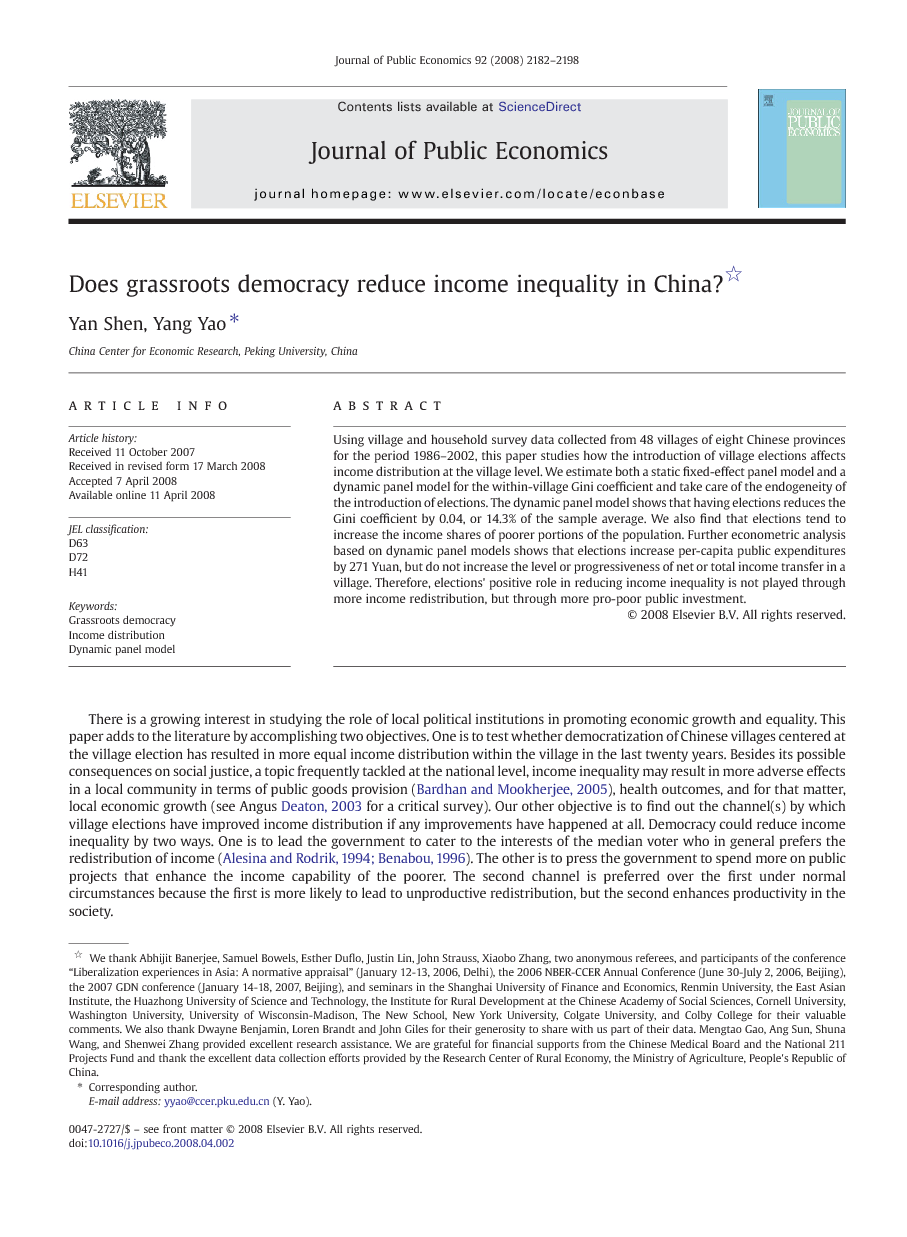 Using village and household survey data collected from 48 villages of eight Chinese provinces for the period 1986–2002, this paper studies how the introduction of village elections affects income distribution at the village level. We estimate both a static fixed-effect panel model and a dynamic panel model for the within-village Gini coefficient and take care of the endogeneity of the introduction of elections. The dynamic panel model shows that having elections reduces the Gini coefficient by 0.04, or 14.3% of the sample average. We also find that elections tend to increase the income shares of poorer portions of the population. Further econometric analysis based on dynamic panel models shows that elections increase per-capita public expenditures by 271 Yuan, but do not increase the level or progressiveness of net or total income transfer in a village. Therefore, elections' positive role in reducing income inequality is not played through more income redistribution, but through more pro-poor public investment.

The Chinese commune system was dissolved in the early 1980s. The commune as an administrative unit was replaced by the township, and the production brigade under the commune was replaced by the village committee (VC). The 1982 Constitution defines the village committee as a self-governing body of the villagers (Clause 111). However, committee members had been appointed rather than elected except in a few localities. In 1987, under the leadership of Vice Chairman Peng Zhen, the National People's Congress (NPC), the Chinese legislative body, passed a tentative version of the OLVC that required the village committee be elected. This law triggered elections in Chinese villages. By 1994, half of the Chinese villages had begun elections. By 1997, 25 of the 31 mainland provinces had adopted a local version of the law, and 80% of the villages had begun elections (Ministry of Civil Affairs, 1998). In 1998, the formal version of the OLVC was passed by the NPC and the election has since spread quickly to virtually all the villages. The VC is comprised of three to seven members depending on the size of the village. The core members are the chairman, vice chairman, and accountant. Before 1998, candidates for the chairman were usually appointed by the township government although popular nomination, a mixture of government appointment and popular nomination, and nomination by villager representatives also existed. The formal version of the OLVC requires that candidates be nominated by villagers, and the minimum number of villagers to propose a candidate is ten. A primary election, then, is held to reduce the number of candidates to two, and the formal contest is run between these two frontrunners. This version of election is popularly called hai-xuan. Since 1998 hai-xuan has become more popular. The term of the committee is three years but no term limit is required. Village elections in China operate in a weak institutional environment. In a typical village, the elected VC faces two major challenges that may hinder its ability to serve the wills of the villagers. The first is its relationship with the communist party committee in the village. Despite the fact that the party committee is not popularly elected, the OLVC stipulates that the VC work under the leadership of the party committee, reflecting the nature of China's one-party system. Since he/she is appointed by the higher authority, the party secretary often pursues a different agenda than the VC's. Backed by popular votes, however, the chairman of the VC often defies the direction of the party secretary, but the result of the contest is not always in his favor (Oi and Rozelle, 2000 and Guo and Bernstein, 2004). To reconcile the conflicts between the VC and the party secretary, the central government has begun to encourage the latter to run for the VC chairman in elections. While this will ease the tension inside the village (Guo and Bernstein, 2004), the VC still needs to face a second challenge that comes from above. Since village elections operate in an authoritarian institutional environment, where the upper-level governments, the township and county governments in particular, are not elected and often intrude in village elections and other village affairs, their effectiveness to serve the wills of the villagers has been called in doubt. Evidence does show that informed local people tend not to trust the election. For example, in a survey conducted in Fujian province, Yang Zhong and Jie Chen (2002) found that it was the villagers who had low levels of internal efficacy and democratic values that were more likely to participate in elections, and those with higher levels of internal efficacy and democratic orientation stayed away from elections due to their awareness of the institutional constraints placed on them. The above two challenges raise the question as to whether elections would enhance the VC's accountability to the local population. This question is compounded by the possibility of elite capture inside the village. Rising business elites have been frequently found to dominate village elections (Liu et al., 2001). Although there are not a priori reasons to believe that business elites would necessarily steer the VC to adopt pro-rich policies, this belief lingers within the Chinese academia and policy circles.

In this paper we use a unique panel data set to study the effects of grassroots democracy on income distribution. Using the dynamic panel model and accounting for the endogeneity of the election, we have found that the direct effect of elections is to reduce the Gini coefficient by 14.3% and its gross effect is to do so by 9.3%. We have also found that elections tend to increase the income shares of the poorer portions than of the richer portions of population, so their positive effect in reducing the Gini coefficient is more likely to be brought by pro-poor policies. Further econometric analysis has shown that elections have not significantly changed the level and progressiveness of net and total transfer income. In addition, elections are found to significantly increase per-capita public expenditures. Therefore, the reduction of the Gini coefficient is not a result of pro-poor income redistribution, but instead a result of increased public investment. Since the level of public goods provision is generally low in rural China, it is reasonable to believe that poor households would benefit more from increased public investment because the rich can rely more on their own investment to generate income.11 Our work contributes to the analysis of decentralized governance in weakly institutionalized polities that by far the academia lacks sufficient understanding on (Acemoglu, 2005). We show that grassroots democracy works to enhance local governance even in the highly centralized political system in China. The period covered by our study was one when income inequality in rural China rose up quickly, so our finding of the positive role of village elections in reducing income inequality by way of more public investment is especially significant. Inside China, village elections have been frequently criticized as an expensive yet ineffective device to strengthen the accountability of the village government. Our results provide strong evidence to disqualify such criticisms.