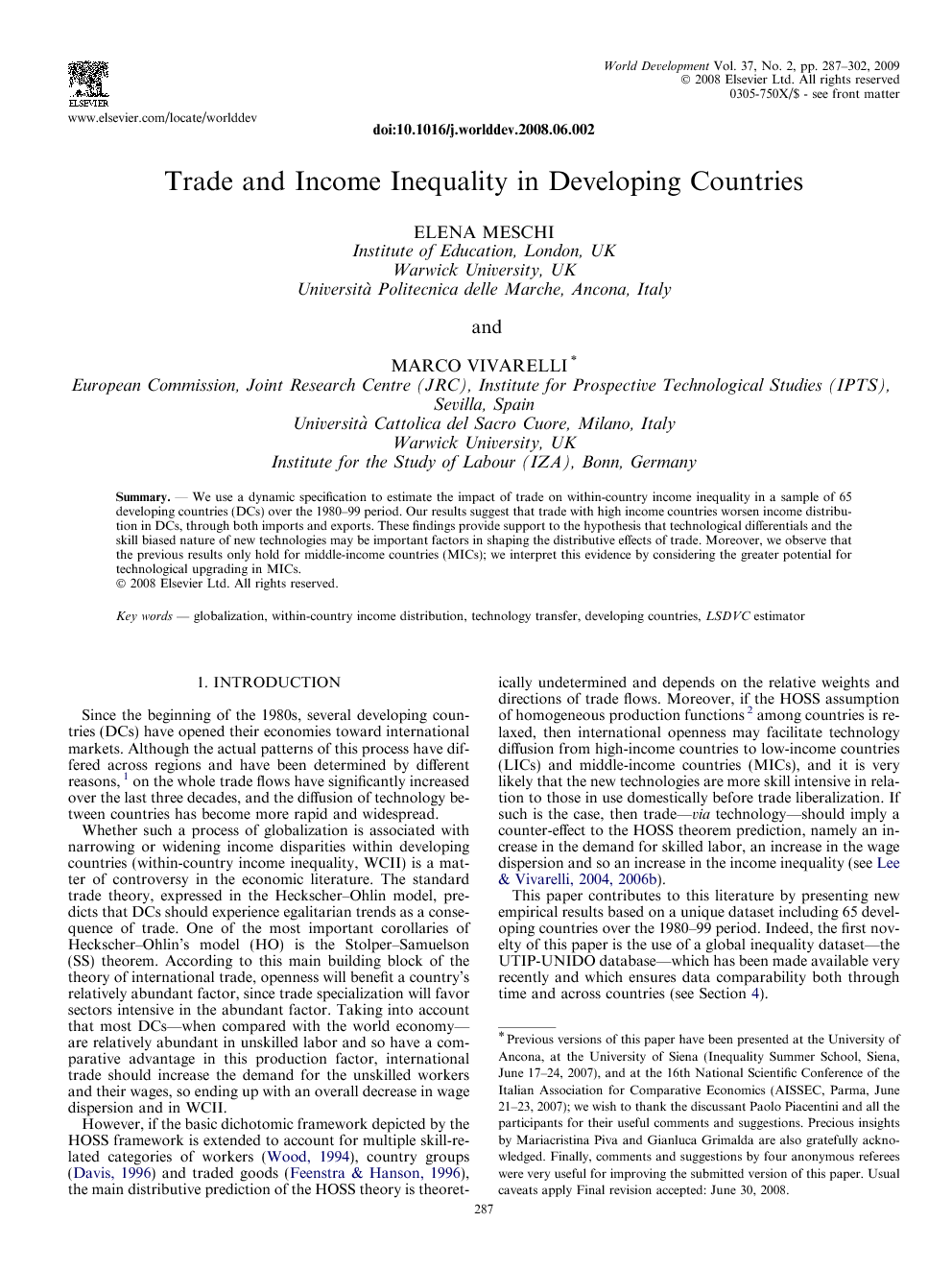 We use a dynamic specification to estimate the impact of trade on within-country income inequality in a sample of 65 developing countries (DCs) over the 1980–99 period. Our results suggest that trade with high income countries worsen income distribution in DCs, through both imports and exports. These findings provide support to the hypothesis that technological differentials and the skill biased nature of new technologies may be important factors in shaping the distributive effects of trade. Moreover, we observe that the previous results only hold for middle-income countries (MICs); we interpret this evidence by considering the greater potential for technological upgrading in MICs.

Since the beginning of the 1980s, several developing countries (DCs) have opened their economies toward international markets. Although the actual patterns of this process have differed across regions and have been determined by different reasons,1 on the whole trade flows have significantly increased over the last three decades, and the diffusion of technology between countries has become more rapid and widespread. Whether such a process of globalization is associated with narrowing or widening income disparities within developing countries (within-country income inequality, WCII) is a matter of controversy in the economic literature. The standard trade theory, expressed in the Heckscher–Ohlin model, predicts that DCs should experience egalitarian trends as a consequence of trade. One of the most important corollaries of Heckscher–Ohlin’s model (HO) is the Stolper–Samuelson (SS) theorem. According to this main building block of the theory of international trade, openness will benefit a country’s relatively abundant factor, since trade specialization will favor sectors intensive in the abundant factor. Taking into account that most DCs—when compared with the world economy—are relatively abundant in unskilled labor and so have a comparative advantage in this production factor, international trade should increase the demand for the unskilled workers and their wages, so ending up with an overall decrease in wage dispersion and in WCII. However, if the basic dichotomic framework depicted by the HOSS framework is extended to account for multiple skill-related categories of workers (Wood, 1994), country groups (Davis, 1996) and traded goods (Feenstra & Hanson, 1996), the main distributive prediction of the HOSS theory is theoretically undetermined and depends on the relative weights and directions of trade flows. Moreover, if the HOSS assumption of homogeneous production functions2 among countries is relaxed, then international openness may facilitate technology diffusion from high-income countries to low-income countries (LICs) and middle-income countries (MICs), and it is very likely that the new technologies are more skill intensive in relation to those in use domestically before trade liberalization. If such is the case, then trade—via technology—should imply a counter-effect to the HOSS theorem prediction, namely an increase in the demand for skilled labor, an increase in the wage dispersion and so an increase in the income inequality (see Lee and Vivarelli, 2004 and Lee and Vivarelli, 2006b). This paper contributes to this literature by presenting new empirical results based on a unique dataset including 65 developing countries over the 1980–99 period. Indeed, the first novelty of this paper is the use of a global inequality dataset—the UTIP-UNIDO database—which has been made available very recently and which ensures data comparability both through time and across countries (see Section 4). The second novelty of this paper regards the econometric specification and the estimation technique. Given the revealed persistence of the within-country inequality indexes, we use a dynamic specification which allows us to account for the path-dependent nature of the distributional pattern. The resulting endogeneity problem is addressed by using a least squares dummy variable corrected (LSDVC) estimator, a recently proposed panel data technique particularly suitable for small samples. As regards our dependent variables, we use trade measures3—namely import and export—further disentangled accordingly to their origin/destination areas. Our results show that both imports and exports from/to industrialized countries (ICs) significantly worsen the income distribution in MICs. We interpret these findings by considering the interactions between a country’s economic integration and its technological upgrading. The remainder of the paper is organized as follows: in Section 2, we critically discuss the arguments in favor of the alleged egalitarian impact of trade on within-country income inequality, mainly from a theoretical point of view. Section 3 presents the empirical model and explains the econometric specification. Section 4 describes the data and shows some descriptive statistics. Section 5 presents and discusses the results, while conclusive statements are derived in Section 6.

This paper has discussed the impact of trade flows on within-country income inequality in DCs. We have argued that the interplays between trade and the adoption of technology may constitute an important mechanism leading to a possible increase in income differentials in the liberalizing DCs. Theoretically, if the HOSS assumption of identical technologies across countries is dropped, increasing exposure to international markets can foster the process of technology diffusion across DCs, through both imports and exports. The technologies transferred from the more advanced countries are more skill-intensive with respect to those domestically in use in the DC, and thus the trade-induced technology upgrading may result in a shift in labor demand in favor of skilled labor, ending in a generalized increase in the skill premium and hence in a more unequal income distribution. We have used a dynamic specification to estimate the impact of trade on WCII in a sample of 65 DCs over the 1980–99 period. Consistent with the previous evidence, our results suggest that total aggregate trade flows are not significantly related to WCII in DCs. However, we have moved a step forward, disaggregating total trade flows according to their areas of origin/destination, our hypothesis being that what should matter in terms of income inequality is not trade in general, but only trade with the more advanced countries, where the potential for technology diffusion originates. Indeed, we found that only trade with high-income countries worsens income distribution in DCs, through both imports and exports. Interestingly enough—and not yet investigated by the theoretical literature—contrasting evidence emerges as far as intra DC trade is concerned: import and export within the group of the DCs are probably unskill biased and imply a decreasing WCII. Having tested the differential impact of trade in middle-income versus low-income countries, we then observed that the previous results only hold for MICs. We interpreted this evidence by considering the greater potential for technological upgrading in MICs, in terms of both their higher “absorptive capacity” and their superior ability to serve the differentiated and high-quality markets of the developed world. Many of previous studies were characterized by a cross-section methodology and hence the between-country dimension of inequality was dominant. In contrast, this paper has focused on WCII, which has become even more important in the recent times. In fact, while population-weighted between-country inequality has shown a declining historical trend, the opposite has emerged as far as the within-country component of income distribution is concerned (see Sala-i-Martin, 2002). Moreover, WCII trends are crucial in terms of social cohesion42 and political stability and may be considered a possible target for national and multilateral economic policies. In particular, our results suggest that the optimistic HOSS predictions do not apply to the current wave of globalization (see Easterly, 2001 and Stiglitz, 2002); indeed, not only a decrease in within-country inequality is not automatically assured by increasing trade, but also increases in income disparities and marginalization phenomena are very likely to emerge as consequences of the “skill enhancing trade.” In this framework, the domestic level of economic and human development does matter in shaping the direction and the impact of globalization over WCII in the DCs. For instance, the role of the physical and human infrastructures is crucial in minimizing the negative distributional effects of increasing trade with the more industrialized countries. Conversely, bottlenecks in the supply of educated and skilled labor may condemn a developing country to the economic marginalization and to the high levels of domestic income inequality. This means that there is scope for active social intervention, such as targeted and high-quality education and training policies addressed to increasing the supply of skilled labor. At the same time, the construction of a welfare system able to create safety nets and insurance schemes for the possible victims of the globalization process would also be advisable. In this context, national policies within DCs might be severely constrained as far as domestic public budgets are concerned, while international organizations might instead play a pivotal role (see, for instance, ILO, 2004).