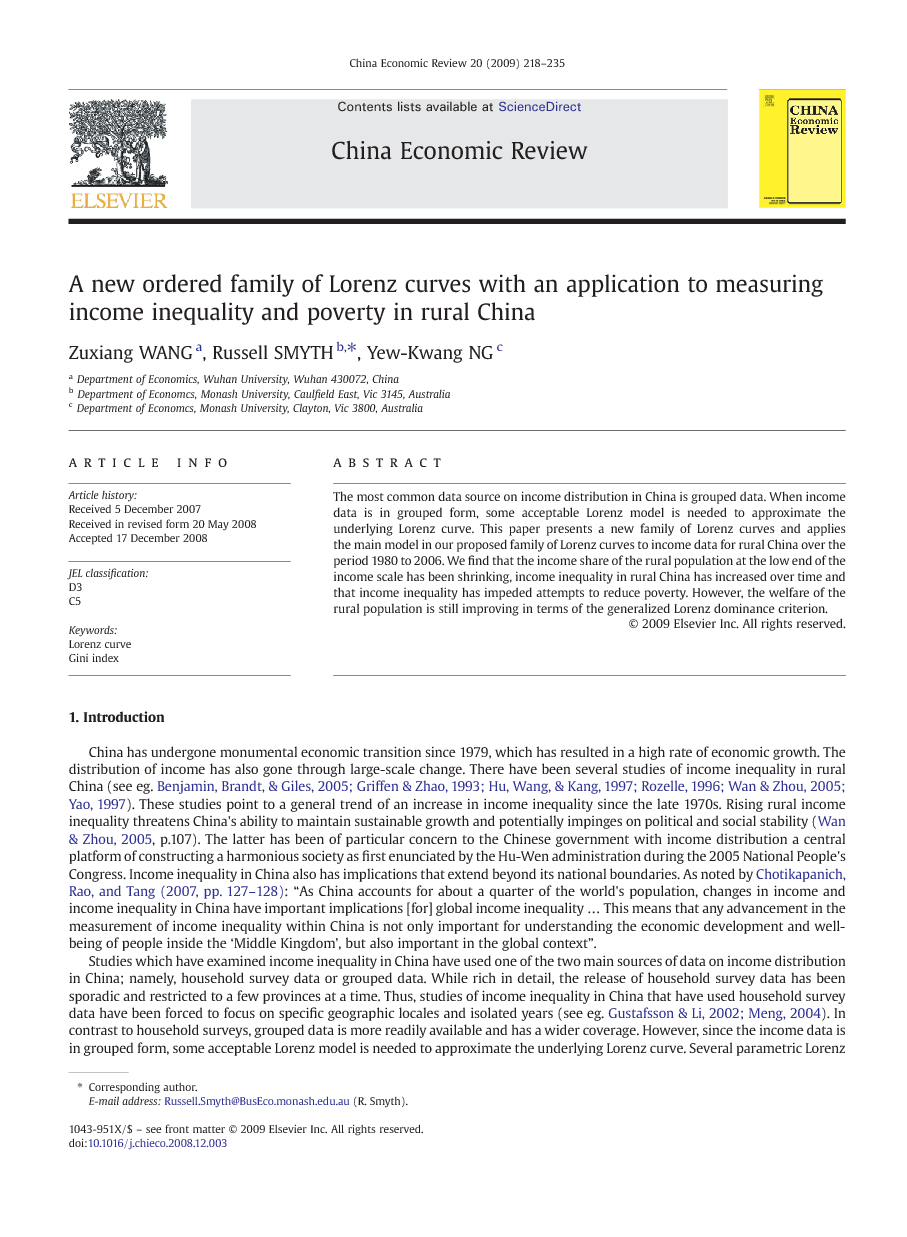 The most common data source on income distribution in China is grouped data. When income data is in grouped form, some acceptable Lorenz model is needed to approximate the underlying Lorenz curve. This paper presents a new family of Lorenz curves and applies the main model in our proposed family of Lorenz curves to income data for rural China over the period 1980 to 2006. We find that the income share of the rural population at the low end of the income scale has been shrinking, income inequality in rural China has increased over time and that income inequality has impeded attempts to reduce poverty. However, the welfare of the rural population is still improving in terms of the generalized Lorenz dominance criterion.

China has undergone monumental economic transition since 1979, which has resulted in a high rate of economic growth. The distribution of income has also gone through large-scale change. There have been several studies of income inequality in rural China (see eg. Benjamin et al., 2005, Griffen et al., 1993, Hu et al., 1997, Rozelle, 1996, Wan and Zhou, 2005 and Yao, 1997). These studies point to a general trend of an increase in income inequality since the late 1970s. Rising rural income inequality threatens China's ability to maintain sustainable growth and potentially impinges on political and social stability (Wan & Zhou, 2005, p.107). The latter has been of particular concern to the Chinese government with income distribution a central platform of constructing a harmonious society as first enunciated by the Hu-Wen administration during the 2005 National People's Congress. Income inequality in China also has implications that extend beyond its national boundaries. As noted by Chotikapanich, Rao, and Tang (2007, pp. 127–128): “As China accounts for about a quarter of the world's population, changes in income and income inequality in China have important implications [for] global income inequality … This means that any advancement in the measurement of income inequality within China is not only important for understanding the economic development and well-being of people inside the ‘Middle Kingdom’, but also important in the global context”. Studies which have examined income inequality in China have used one of the two main sources of data on income distribution in China; namely, household survey data or grouped data. While rich in detail, the release of household survey data has been sporadic and restricted to a few provinces at a time. Thus, studies of income inequality in China that have used household survey data have been forced to focus on specific geographic locales and isolated years (see eg. Gustafsson and Li, 2002 and Meng, 2004). In contrast to household surveys, grouped data is more readily available and has a wider coverage. However, since the income data is in grouped form, some acceptable Lorenz model is needed to approximate the underlying Lorenz curve. Several parametric Lorenz models to fit grouped data have been developed (see Basmann et al., 1990, Cheong, 2002, Chotikapanich, 1993, Gupta, 1984, Holm, 1993, Kakwani, 1980, Kakwani and Podder, 1973, Kakwani and Podder, 1976, Ogwang and Rao, 1996, Ogwang and Rao, 2000, Ortega et al., 1991, Rao and Tam, 1987, Rasche et al., 1980, Rossi, 1985, Ryn and Slottje, 1996, Sarabia, 1997, Sarabia et al., 2005, Sarabia et al., 1999, Sarabia et al., 2001 and Schader and Schmid, 1994). A limitation of some models that have been used to approximate the Lorenz curve is that they do not in fact satisfy the definition of the Lorenz curve (see Kakwani, 1980 and Kakwani and Podder, 1976). Another shortcoming of some Lorenz models, as noted by Cheong (2002), is that they tend to underestimate or overestimate the Gini index by generating values outside the Gastwirth (1972) lower or upper bounds for the Gini index. Recent research has concentrated on finding models which are satisfactory both in theory and in practice. These models need to be able to satisfy the definition of the Lorenz curve as well as exhibit good performance for a variety of data sources (see, eg, Ogwang and Rao, 2000, Ryn and Slottje, 1996 and Sarabia et al., 1999). The objective of this paper is to develop a new Lorenz curve model, building on a basic model, first proposed by Sarabia et al. (1999), and apply this model to examine rural income inequality and poverty with grouped data in China. Sarabia et al. (1999) suggest a basic model of the form L̃(p) = pαL(p)η. We first show that this model can be generalized and proceed to apply the generalized model to income data for rural China over the period 1980 to 2006. This allows us to examine the relationship between rural income inequality and poverty over a quarter century of market reforms. To this point: “One striking feature of the current discussion of inequality in China is the absence of well-documented facts about inequality and temporal changes in the structure of the income distribution” (Benjamin et al., 2005, p.769). This reflects the fact that while there are several studies of income inequality in China, with few exceptions most have provided only a snapshot without a time profile. Our results show that the income share of low income earners in rural China is getting smaller, income inequality in rural China has increased over time and that rural income inequality has impeded attempts to reduce poverty. However, in spite of worsening rural income inequality, we also find that the welfare of the rural population is still improving in terms of the generalized Lorenz dominance criterion. The paper is set out as follows. Section 2 presents a new Lorenz curve model, building on a basic model, first proposed by Sarabia et al. (1999). Section 3 outlines the indices used to measure income inequality and poverty in rural China and generalized Lorenz dominance used to evaluate changes in social welfare over time. Section 4 applies the new Lorenz curve model to present new estimates of income inequality and poverty in rural China. The final section is the conclusion.

This paper has introduced a new Lorenz curve model specification and applied it to Chinese rural data over the period 1980 to 2006 to draw conclusions about trends in income inequality. Poverty measures have also been presented and inferences drawn on how inequality has contributed to poverty in recent times. The first main conclusion is that the rural poor have been the big losers from China's economic reforms. Our results suggest that the income share of the rural population at the low end of the income scale has been shrinking. The second conclusion is that income inequality in rural China has increased over time and that income inequality has impeded attempts to reduce poverty. The third conclusion is that in spite of worsening rural poverty and increased rural income inequality, the welfare of the rural population is still improving in terms of the generalized Lorenz dominance criterion. Our results suggest that that there is an urgent need for policies designed to assist the rural poor at the bottom end of the income scale. Other research suggests that policies designed to assist this group need not impinge on overall growth and indeed may be growth enhancing (Wan et al., 2006). What form should such policies take? Our research does not examine the causes of rural poverty. However, previous research suggests that the most effective approach to improving the lot of the rural poor is through a multi-pronged approach. For instance, based on data spanning almost three decades from 1970 to 1997, Fan et al. (2002) argue that the most effective approach is a mixture of investment in human capital, investment in agricultural research and development and investment in rural infrastructure. There are elements of these policies in the State Council's “Number 1 Document” issued in 2006 (Chow, 2006). Such policies could be coupled with programs targeted to areas experiencing high levels of rural poverty. The central and provincial governments have invested in “poor area development programs”, many of which have delivered reasonable rates of return (Ravallion & Jalan, 1999). At a more general level, several studies have emphasized that farmers' rights have been violated by illegal activities of local government officials including confiscation of land without adequate compensation (Chen, 2006 and Chow, 2006). This point relates not to poverty in the narrow sense of low income per se, but is concerned with the economic welfare of low income families when their property rights are violated. The National People's Congress passed the Rural Land Contract Law in 2003 which outlaws illegal seizure, but enforcement has been problematic. Wen Jiabao stated in 2006 that enforcement must be improved to avoid illegal seizures as part of a strategy to reduce rural protests (Chow, 2006). In terms of future research, on the methodological front, one of the challenges of using grouped data to study income inequality in China is to develop more efficient Lorenz models to approximate the underlying Lorenz curve. This paper shows that the basic Lorenz model of L̃(p) = pαL(p)η and the concept of the ordered family of Lorenz curves developed by Sarabia et al. (1999), are important ideas. However, we also show that the condition imposed by Sarabia et al. (1999) for the models to be Lorenz curves proves to be restrictive. Theorem 3 in this paper ensures that we can construct new Lorenz models from almost any parametric function L(p) so long as it satisfies the condition of the Lorenz curve. Moreover, we can find even better performing Lorenz models if the condition L″′(p) ≥ 0 is satisfied. Further research could use theorem 3 developed in this paper to find other L(p), in order to create more efficient Lorenz models with the basic form L̃(p). Future research could build on the methodological contribution here to find other models which are efficient and, as such, have larger admissible ranges of η. One of the limitations of our results is that we have said nothing about the huge urban-rural income gap and spatial income differences in China. Future research could use more efficient Lorenz models to examine the rural-urban divide in China or do a comparative study of income distribution between China and other countries.