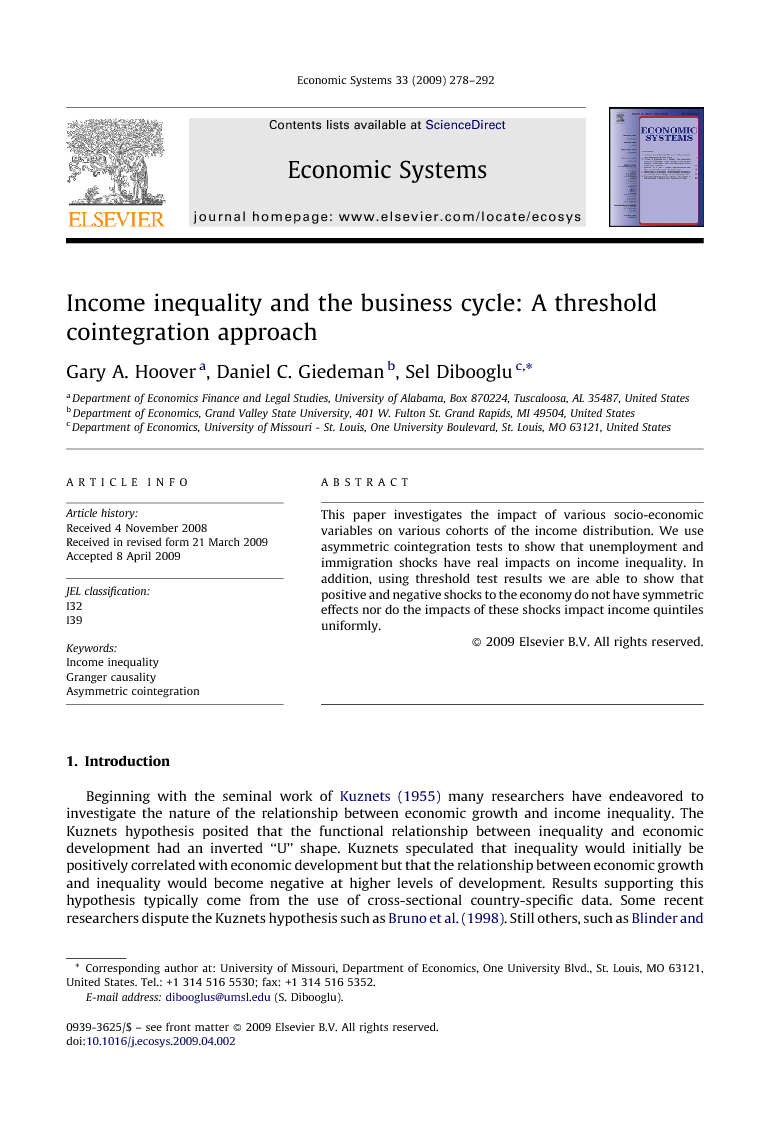 This paper investigates the impact of various socio-economic variables on various cohorts of the income distribution. We use asymmetric cointegration tests to show that unemployment and immigration shocks have real impacts on income inequality. In addition, using threshold test results we are able to show that positive and negative shocks to the economy do not have symmetric effects nor do the impacts of these shocks impact income quintiles uniformly.

The interaction of the business cycle and income inequality is of great importance to academics and policy makers alike. If it is true that “a rising tide lifts all boats” then policies designed to grow the economy as fast and as vigorously as possible may be viewed as desirable. This type of policy ensures that all segments of the income distribution are enhanced. However, if different cohorts along the income distribution do not behave uniformly to shocks to economy it may be necessary to derive a more extensive policy instrument. In this paper we show that asymmetries do exist among the quintiles comprising the U.S. income distribution over the last 50 years. Of particular note, this paper finds that increases in unemployment causes increases in income inequality but that negative shocks to unemployment have only short-lived positive benefits to income inequality. This is a new and important finding. In addition, this work shows that shocks to unemployment have impacts that are not uniform to cohorts along the income distribution. In particular, those individuals with the lowest mean family income (sorted by quintile) are most adversely affected by shocks to unemployment but are quickest to return to the steady state. The paper also shows that immigration is an important factor in explaining changes in inequality. Increases in immigration lead to significant increases inequality but it should be noted that we do not distinguish between country of origin of incoming groups. What is principally important to note in this work is that policies designed to increase the well-being of the entire range along the income distribution should be tailored and exact since it is clear that persons in different income quintiles have distinctly different reactions to business cycle changes.