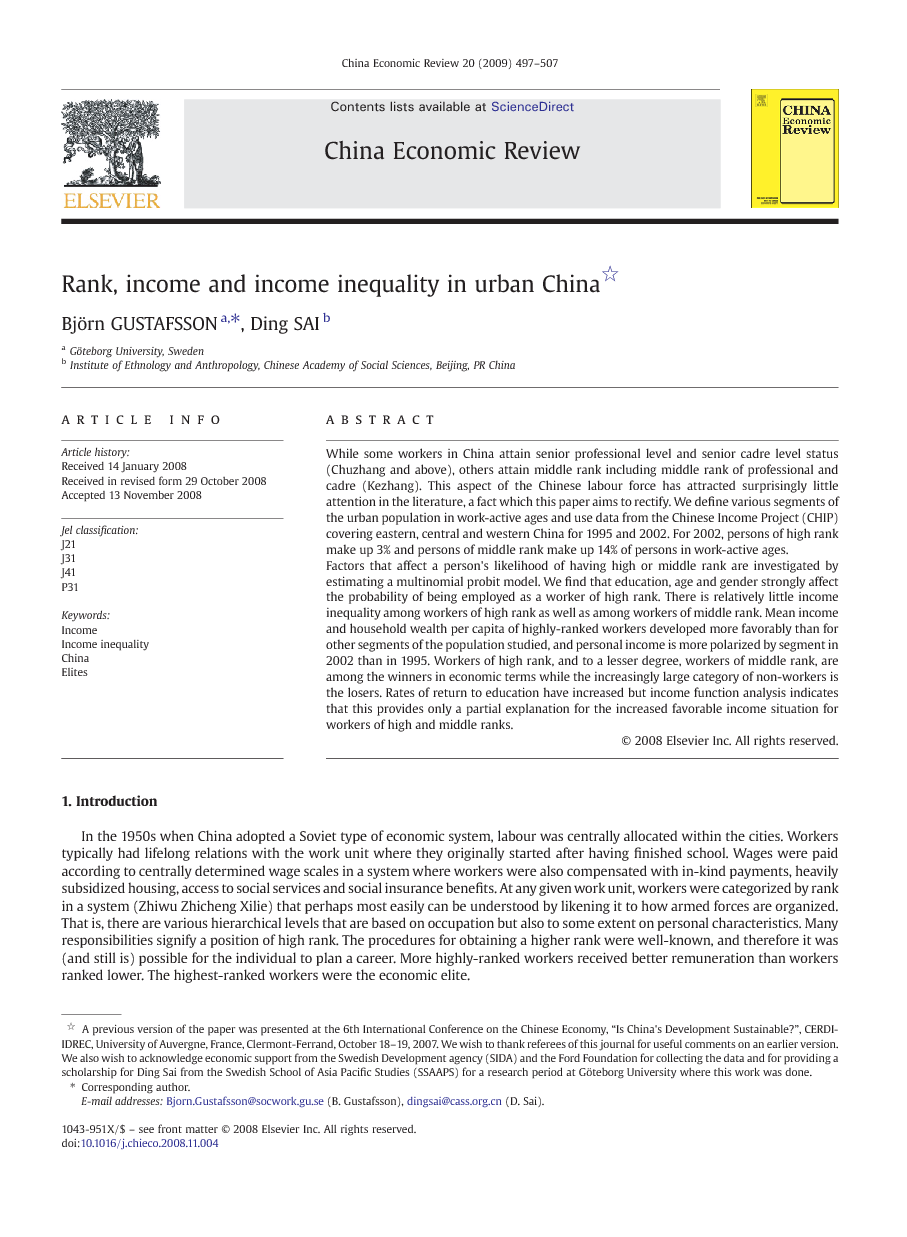 While some workers in China attain senior professional level and senior cadre level status (Chuzhang and above), others attain middle rank including middle rank of professional and cadre (Kezhang). This aspect of the Chinese labour force has attracted surprisingly little attention in the literature, a fact which this paper aims to rectify. We define various segments of the urban population in work-active ages and use data from the Chinese Income Project (CHIP) covering eastern, central and western China for 1995 and 2002. For 2002, persons of high rank make up 3% and persons of middle rank make up 14% of persons in work-active ages. Factors that affect a person's likelihood of having high or middle rank are investigated by estimating a multinomial probit model. We find that education, age and gender strongly affect the probability of being employed as a worker of high rank. There is relatively little income inequality among workers of high rank as well as among workers of middle rank. Mean income and household wealth per capita of highly-ranked workers developed more favorably than for other segments of the population studied, and personal income is more polarized by segment in 2002 than in 1995. Workers of high rank, and to a lesser degree, workers of middle rank, are among the winners in economic terms while the increasingly large category of non-workers is the losers. Rates of return to education have increased but income function analysis indicates that this provides only a partial explanation for the increased favorable income situation for workers of high and middle ranks.

In this paper we have claimed that greater attention should be paid to the ranking system when trying to understand the Chinese labour market and its changes. Although larger proportions of people of working age than previously are not covered by the ranking system, in 2002 around 3% of persons of working age belonged to the high rank category as defined here and another 14% belonged to the middle rank category. These proportions are actually similar to those calculated for 1995. Using microdata from surveys covering large parts of urban China, we have investigated factors essential for belonging to each of the previously mentioned categories as well as to four other categories, by estimating a multinomial probit model. We have also investigated how personal income, disposable per capita income (averages and inequality), household wealth per capita and housing space per capita changed from 1995 to 2002 for the six categories. Further we studied the income generation process by estimating regression models. Not surprisingly, we have confirmed that presence of a long education and relatively high age makes it more likely for a person to have a high or middle rank than a low rank. China's high-rank workers compose a men's club, to a large extent, as in 2002 there were four males for every female. We have reported that there is relatively little inequality in personal income among persons of high and middle rank, though it is increasing. A main conclusion is that the old elite of workers of high rank have not only succeeded in keeping their money income position, but also they have actually experienced increases in relation to other persons of work-active ages. Workers of high rank, and to a lesser degree of middle rank, are the winners. This judgment is based on the analysis of personal income, disposable income per capita, household income per capita and housing space per capita. During the period 1995 to 2002, the losers are the increasingly large group of non-workers. In 2002, the distribution of personal income in urban China among people of work-active ages was more polarized than in 1995, based on the categories used here. During this period, the rates of return to education increased. However, the regression analysis reported here indicates that this is far from a full explanation for why workers of high rank, and to some extent middle rank, have fared as well as they have. Our analysis indicates that gender differences in urban China consist of lesser probability for women having high-rank jobs, and of lower payoffs for characteristics within the segment where women work. Finally, our study has illustrated that a strong impulse towards more inequality arising from the labour market was significantly dampened at the household level.