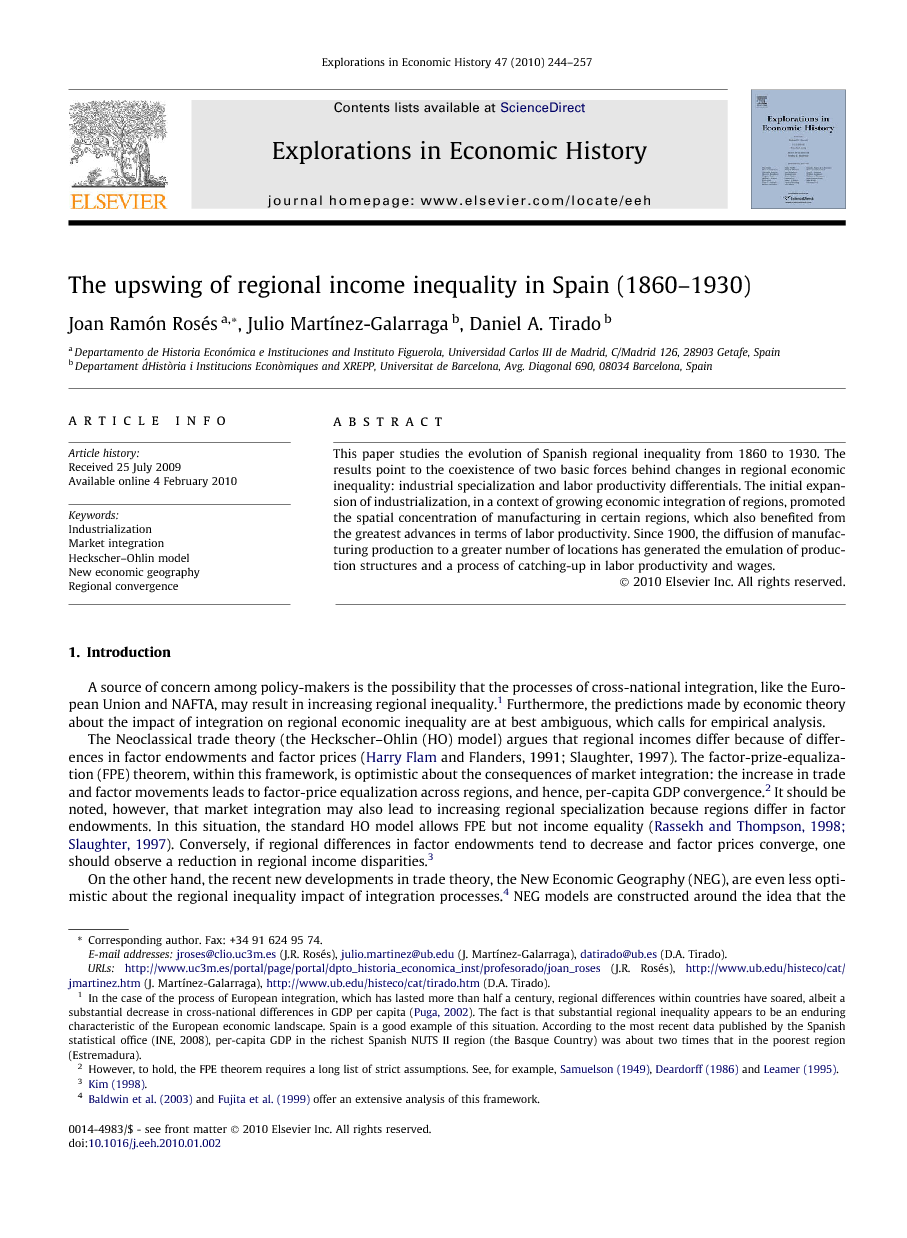 This paper studies the evolution of Spanish regional inequality from 1860 to 1930. The results point to the coexistence of two basic forces behind changes in regional economic inequality: industrial specialization and labor productivity differentials. The initial expansion of industrialization, in a context of growing economic integration of regions, promoted the spatial concentration of manufacturing in certain regions, which also benefited from the greatest advances in terms of labor productivity. Since 1900, the diffusion of manufacturing production to a greater number of locations has generated the emulation of production structures and a process of catching-up in labor productivity and wages.

This article provides the first empirical analysis of the upswing of regional income inequality in Spain. We do this by constructing a new database in regional per-capita GDP for the seventeen Spanish NUTS II regions (by aggregating NUTS III provinces) for the years 1860, 1900, 1910, 1920 and 1930. Our approach follows Geary and Stark’s (2002) basic methodology but introduces several refinements. More specifically, we estimated agricultural regional output not indirectly but directly from production figures, considered capital differences in manufacturing (like in Crafts, 2005), and used several different wages as determinants of productivity in different services industries. The formation of the Spanish national market progressed significantly from 1860–1900 due to improvements in transport and institutional changes. At the same time, industrialization and urban expansion were underway. As a consequence, the share of industry and services in the Spanish GDP grew, to the detriment of agricultural participation. These processes were not accompanied by dramatic changes in the positions of different regions in terms of per-capita GDP. Only the Basque Country improved its ranking position, while Andalusia lost significant ground, falling from the top to middle positions. Regional incomes practically did not converge, and even diverged from 1860 to 1910. As Trade Theory predicts, in response to market integration, regional specialization increased up to 1920. What determined the fortunes of the different Spanish regions? In line with the predictions of Jeffrey Williamson, regional inequality increased substantially in Spain during the initial phases of economic growth and industrialization. Furthermore, this inequality growth was mainly caused by divergent patterns of regional specialization; that is, by the very unequal distribution of industry and services. The expansion of industry to a limited number of regions during the second half of the 19th century increased regional inequality; while the contrary holds for the first third of the twentieth century. In this sense, the Spanish experience closely resembles that of the United States (Kim, 1998 and Caselli and Coleman, 2001). Our results also have important implications for judging the validity of alternative theoretical explanations for regional inequality. Broadly speaking, it seems that the proposal of Epifani (2005), which combines HO and NEG models, explains the Spanish historical experience quite well. More prominently, as our decomposition of per-capita GDP in productivity and industry-mix effects shows, regions that specialized in the most productive industries also enjoyed the higher labor productivity levels. In other words, they had favorable endowments and also benefited from NEG forces. However, it seems that HO forces were the main driver behind unequal regional development, given that between-sector differences accounted for the lion’s share of regional differences in labor productivity. The increasing returns explanation, mainly related to within industry differences in industry and services, was only significant in the years 1920 and 1930. Therefore, it seems that once industrialization arrived in a considerable number of regions, NEG forces gained momentum to the detriment of regional differences in factor endowments.