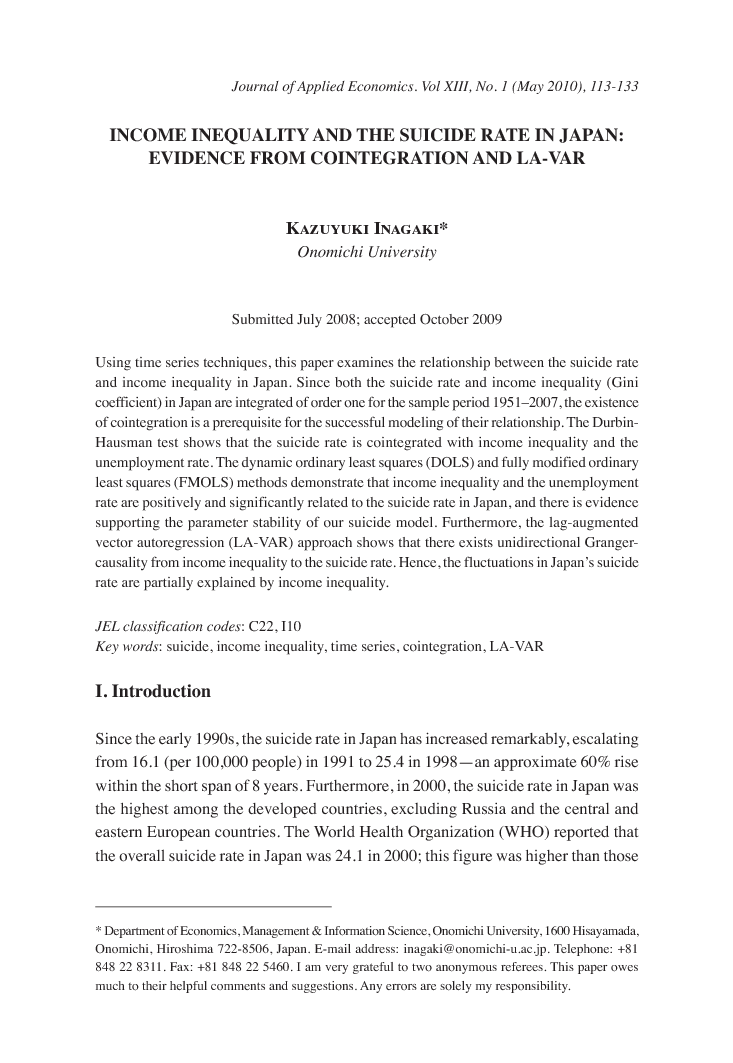 In this paper, we examine the relationship between the suicide rate and income inequality in Japan. We distinguish our work from the existing literature by using time series techniques such as the Durbin-Hausman test for cointegration, the DOLS and FMOLS methods, and a Granger causality test based on the LA-VAR approach. Since our focus is on Japan, an empirical analysis based on Japanese time series data serves our purpose. Our main findings can be summarized as follows: (i) the suicide rate, income inequality (Gini coefficient), and the unemployment rate are integrated of order one; (ii) the suicide rate is cointegrated with income inequality and the unemployment rate, and the parameter stability of the basic suicide model is supported; (iii) income inequality and the unemployment rate are positively and significantly related to the suicide rate; (iv) income inequality and the unemployment rate Granger-cause the suicide rate, but not vice versa; (v) the results showing the impact of income inequality are robust when we test a broader model (there, female labor force participation is negatively related to suicide rate); and (vi) the positive impact of income inequality is robust when we examine that effect separately by gender. As Förster and Mira d’Ercole (2005) indicate, income inequality in Japan has increased consistently since the 1980s. In 2007, the share of non-regular workers reached approximately a third of employees, and this labor market dualism has created a large segment of workers with lower wages, short-term job experience, and limited opportunities to enhance their human capital. These facts have raised serious concerns about equity (e.g., OECD 2008). Hence, it is likely that Japanese people tend to make interpersonal income comparisons. At the same time, the suicide rate in Japan appears to exhibit an upward trend similar to that of the Gini coefficient. Indeed, there is substantial evidence to support the argument that a significant relationship exists between the suicide rate and income inequality in Japan. On these grounds, it seems reasonable to conclude that the time series fluctuations in the suicide rate in Japan over the past 50 years can be partially explained by changes in income inequality. It is important to consider the reason why our results are different from those reported in several previous studies. For example, Andrés (2005), Leigh, and Jencks (2007), and Minoiu and Andrés (2008) report that income inequality does not affect suicide. A possible explanation for this inconsistency is that the determinants of suicide are different in Japan. Chen, Choi, and Sawada (2009) demonstrate this point by using a dummy variable technique. It is also important to note that the panel data analyses of Andrés (2005), Leigh and Jencks (2007), and Minoiu and Andrés (2008) do not include Japanese data, and therefore, the inconsistency is likely to occur. In other words, the suicide and income inequality data for Japan may be outliers compared to the data for the other countries. In this respect, our results are complementary to those reported in the previous studies. Finally, as to the implications of the paper’s results for Japanese mental health care policy, we can reasonably state that it is important to consider both income distribution and labor market conditions in order to reduce the overall suicide rate in Japan. For example, the mental health care policies for males and females in the lowest income group are likely to play an important role in the prevention of suicides in Japan. Likewise, careful attention should be paid to people who lose their jobs, particularly during periods of economic recession, since overall suicide in Japan is countercyclical.