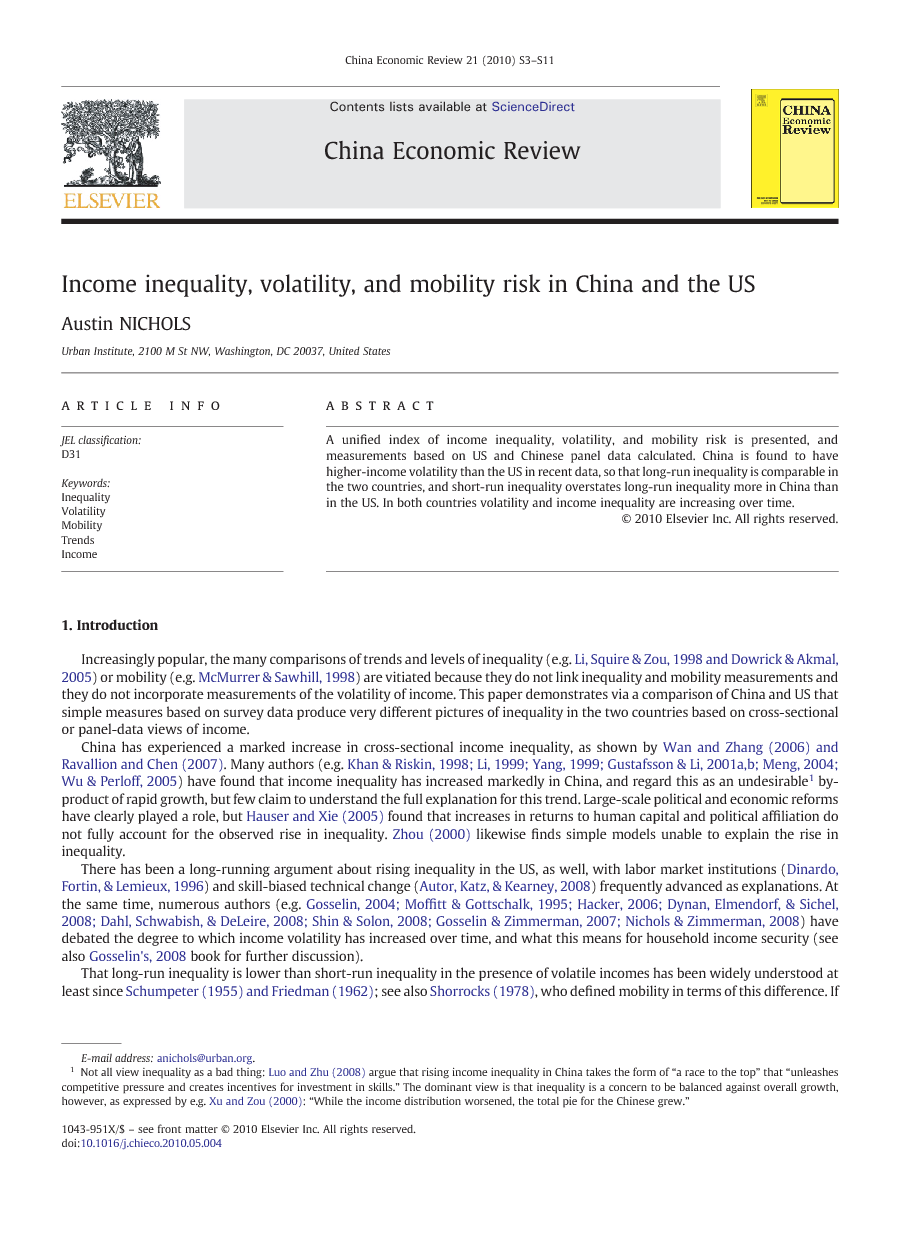 Increasingly popular, the many comparisons of trends and levels of inequality (e.g. Li et al., 1998 and Dowrick and Akmal, 2005) or mobility (e.g. McMurrer & Sawhill, 1998) are vitiated because they do not link inequality and mobility measurements and they do not incorporate measurements of the volatility of income. This paper demonstrates via a comparison of China and US that simple measures based on survey data produce very different pictures of inequality in the two countries based on cross-sectional or panel-data views of income. China has experienced a marked increase in cross-sectional income inequality, as shown by Wan and Zhang, 2006 and Ravallion and Chen, 2007. Many authors (e.g. Khan and Riskin, 1998, Li, 1999, Yang, 1999, Gustafsson and Li, 2001a, Gustafsson and Li, 2001b, Meng, 2004 and Wu and Perloff, 2005) have found that income inequality has increased markedly in China, and regard this as an undesirable1 by-product of rapid growth, but few claim to understand the full explanation for this trend. Large-scale political and economic reforms have clearly played a role, but Hauser and Xie (2005) found that increases in returns to human capital and political affiliation do not fully account for the observed rise in inequality. Zhou (2000) likewise finds simple models unable to explain the rise in inequality. There has been a long-running argument about rising inequality in the US, as well, with labor market institutions (Dinardo, Fortin, & Lemieux, 1996) and skill-biased technical change (Autor, Katz, & Kearney, 2008) frequently advanced as explanations. At the same time, numerous authors (e.g. Gosselin, 2004, Moffitt and Gottschalk, 1995, Hacker, 2006, Dynan et al., 2008, Dahl et al., 2008, Shin and Solon, 2008, Gosselin and Zimmerman, 2007 and Nichols and Zimmerman, 2008) have debated the degree to which income volatility has increased over time, and what this means for household income security (see also Gosselin's, 2008 book for further discussion). That long-run inequality is lower than short-run inequality in the presence of volatile incomes has been widely understood at least since Schumpeter, 1955 and Friedman, 1962; see also Shorrocks (1978), who defined mobility in terms of this difference. If we regard volatility as noise that can be smoothed over by capital markets or self-insurance, we may regard increases in the volatility of income as welfare neutral. On the other hand, to the extent that short-run income fluctuations cannot be insured against, they lower well-being, holding constant the mean level of income. I will focus exclusively on measuring trends in three kinds of income risk (inequality, volatility, and mobility), without characterizing their welfare consequences.2 I present an aggregate measure of income risk as half the squared coefficient of variation (or the general entropy measure with parameter 2, denoted GE2) of incomes measured over both people and time. The aggregate measure can be decomposed into an inequality component measuring dispersion in mean incomes, a volatility component measuring the average dispersion of fluctuations about person-specific trends, and a mobility component measuring the dispersion of person-specific trends. I apply this decomposition to Panel Study of Income Dynamics (PSID) data from the United States and China Health and Nutrition Survey (CHNS) data from China to characterize trends in inequality, volatility, and mobility risk over the last decade. While short-run income inequality is higher in China, I find that long-run income inequality is a larger share of the aggregate income risk in the US than in China, and that volatility is higher and increasing more quickly in China than in the US. Mobility risk plays a small role in aggregate income risk in this decomposition. The results on volatility are similar to those reported by Ding and Wang (2008) who show that the household income mobility in China was high between 1989 and 2000, due primarily to what they term exchange (roughly analogous to volatility). Khor and Pencavel (2006) use retrospective data for China (not true panel data) but find transitory shocks (analogous to volatility) were much more important in China than in the US in the early 1990s.

Using a novel decomposition of variance of incomes in panel data, I present suggestive evidence that apparently higher and more rapidly increasing income inequality in China, relative to the US, is largely due to higher and more rapidly increasing income volatility. Longer-run inequality is very similar in China and the US. It is also possible that a substantial component of measured income volatility is due to measurement error in incomes, so that aggregate income risk may not be substantially higher in China than in the US. However, it is unlikely that measurement error is increasing more quickly in China than in the US, given the trends in response rates to surveys, whereas true household income volatility is very likely increasing in China, with both positive and negative consequences for the well-being of households. The policy implication of this result depends on one's attitude toward observed volatility in family incomes. If one believes that credit markets, formal or informal, allow consumers to smooth effectively across years, then increased volatility has a small impact on well-being holding income level constant but the income growth often associated with volatility may improve well-being. On the other hand, to the extent that families cannot insure themselves against unexpected changes in income, there is a role for policies that provide insurance; progressive taxation combined with income averaging, unemployment and disability insurance, and many other mechanisms can redistribute resources from unexpectedly high-income periods to unexpectedly low-income periods. The picture for China, relative to the US, suggests a role for an increased policy focus on smoothing and insurance mechanisms, and slightly less concern over static inequality statistics.