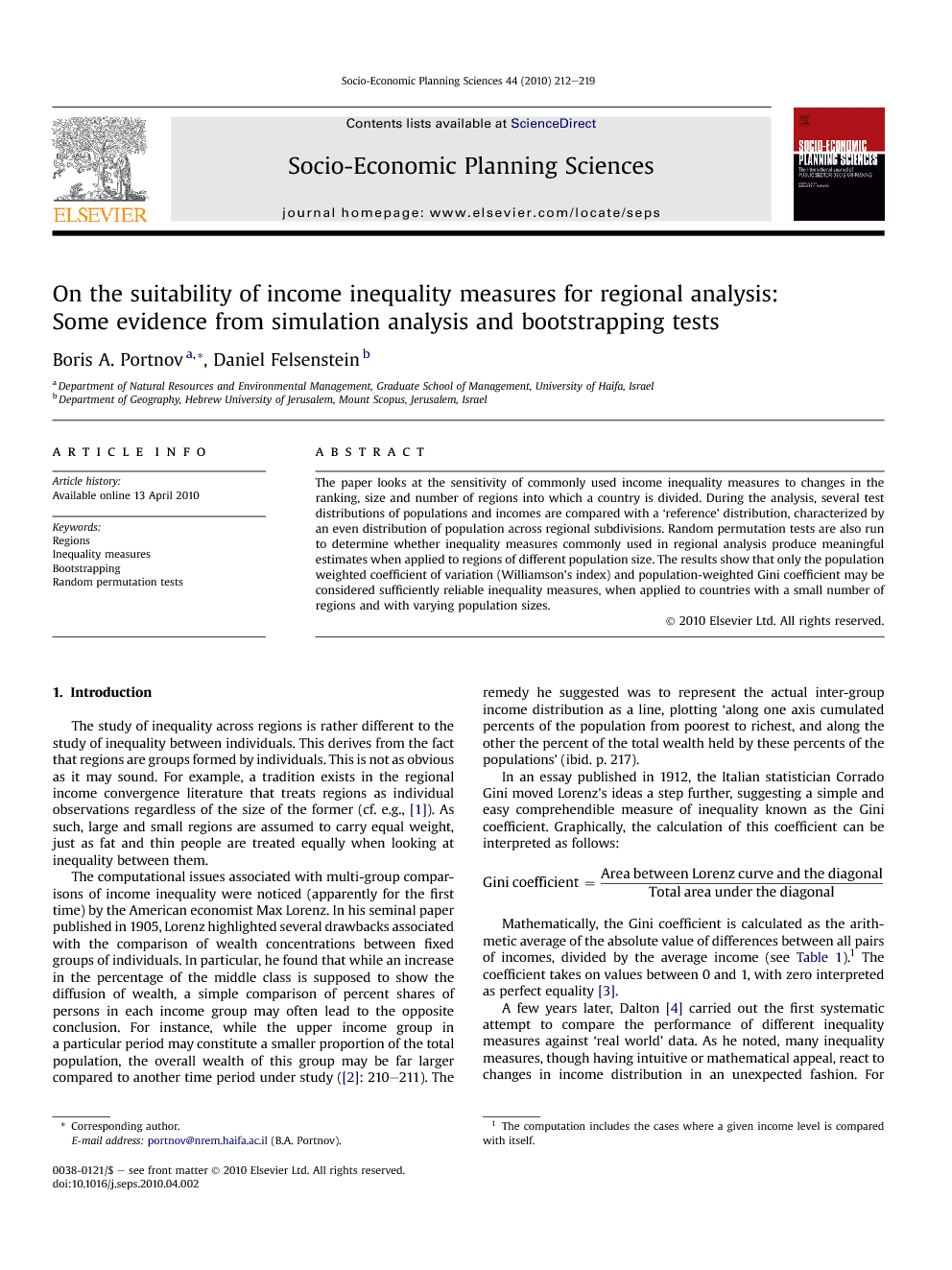 The paper looks at the sensitivity of commonly used income inequality measures to changes in the ranking, size and number of regions into which a country is divided. During the analysis, several test distributions of populations and incomes are compared with a ‘reference’ distribution, characterized by an even distribution of population across regional subdivisions. Random permutation tests are also run to determine whether inequality measures commonly used in regional analysis produce meaningful estimates when applied to regions of different population size. The results show that only the population weighted coefficient of variation (Williamson’s index) and population-weighted Gini coefficient may be considered sufficiently reliable inequality measures, when applied to countries with a small number of regions and with varying population sizes.

Though individual studies of regional disparity may deal with separate development measures – population growth, wages, welfare, regional productivity, etc. – the use of an integrated indicator is often essential, particularly if a comparative (cross-country) analysis is required. In order to measure the extent of disparities, various indices of inequality are commonly used. These indices may be classified into two separate groups [14]: • Measures of deprivation (Atkinson index, Theil redundancy index, Demand and Reserve coefficient, Kullback-Leibler redundancy index, Hoover and Coulter coefficients, and the Gini index); • Measures of variation, such as the coefficient of variation and Williamson’s index. In this paper, we did not attempt to assess whether these measurements reflect either the ‘true meaning’ or ‘underlying causes’ of regional inequality. Neither did we try to establish whether geographic inequality is a positive socio-economic phenomenon or a negative one. We shall leave these philosophical questions for future studies. Our task was simple: we attempted to determine whether commonly used inequality measures produce meaningful estimates when applied to countries of different size and with different number of regional subdivisions, thus making it possible to directly compare the results of analysis obtained for one particular country with those obtained elsewhere. This task is not as abstract as it may sound. There has been a tradition in the regional income convergence literature to treat regions of a country as individual observations, regardless of the numbers of regions into which a country is subdivided and of their population sizes (cf. e.g., [1]). As such, all regions, big and small, are assumed to carry equal weight, an assumption which is hardly justified empirically, considering a large variation in the number of regions and their population sizes that are found in most countries across the globe. In order to formalize these distinctions, we designed a number of simple empirical tests, in which several hypothetical income and population distributions were compared with the ‘reference’ distribution in which the population was distributed evenly across regional divisions and assumed to be static. In the first test, we checked whether the overall number of regions matters. In the second, we checked whether different inequality indices respond to differences in the regional distribution of population, viz., evenly spread population in the reference distribution vs. unevenly spread population in the test distribution. Finally, in the third test, we verified whether different inequality indices were sensitive to the sequence in which regions are introduced into the calculation. Somewhat surprisingly, none of the indices we tested appeared to pass all the tests, meaning that they may produce (at least theoretically) misleading estimates if used for small countries. However, several indices – CC, WI and Gini (W) – appeared to exhibit only minor flaws and may thus be considered as more or less reliable regional inequality measures, when used empirical studies for comparing the extent of regional inequalities across the time and space, that is, over different time periods and between different countries. Mitigating regional development disparities between rapidly developing and economically successful core regions and lagging peripheral areas, has been a prime objective of regional development policy in most developed countries worldwide. In this respect, efficient regional inequality measures may become an indispensible tool for gauging the success of failure of such a policy, enabling policy-makers and regional scientists to compare the extent of development disparities before and after the policy intervention, or in relationship to other countries, characterized by similar development levels. However, this important objective can be achieved only if inequality measures used in the analysis faithfully reflect the extent of interregional disparities but no less importantly, the number of people facing them. For instance, if in a country with e.g., 20 million residents, the population size of the least developed region may be 50,000 or, alternatively, 5,000,000 residents. This difference may have different implications for “regional equalization” policies, both in sense of policy tools to be used and their magnitude. However, if regions are assumed to be indivisible units, equal in size, as with many widely used inequality measures, this important distinction may go unnoticed thereby distorting development policy overall. In this respect, the present analysis serves to caution regional analysts against using different inequality measures indiscriminately or comparing their values directly, between countries and time periods. Although an inequality measure may be sufficiently sensitive to differences in the population size across regions this sensitivity may not always be sufficient, unless intra-regional disparities are also taken into account. Even when controlling for regional size, treating a region as the prime unit of observation in the analysis of regional inequality may hide considerable internal income disparities among its residents. Therefore future research efforts will need to develop regional inequality indices that account for both disparities between individual regions (in terms of their sizes and development levels), as well as their internal income heterogeneities. Further research may also be needed to develop and a set of mathematical tools that can detect potential performance problems of various regional inequality measures, without a need to carry out extensive empirical simulations, such as those undertaken in the present study. Although future work on the performance of different inequality indices may thus be needed to verify the generality of our observations, the present analysis clearly cautions against indiscriminate use of inequality indices for regional analysis and comparison.