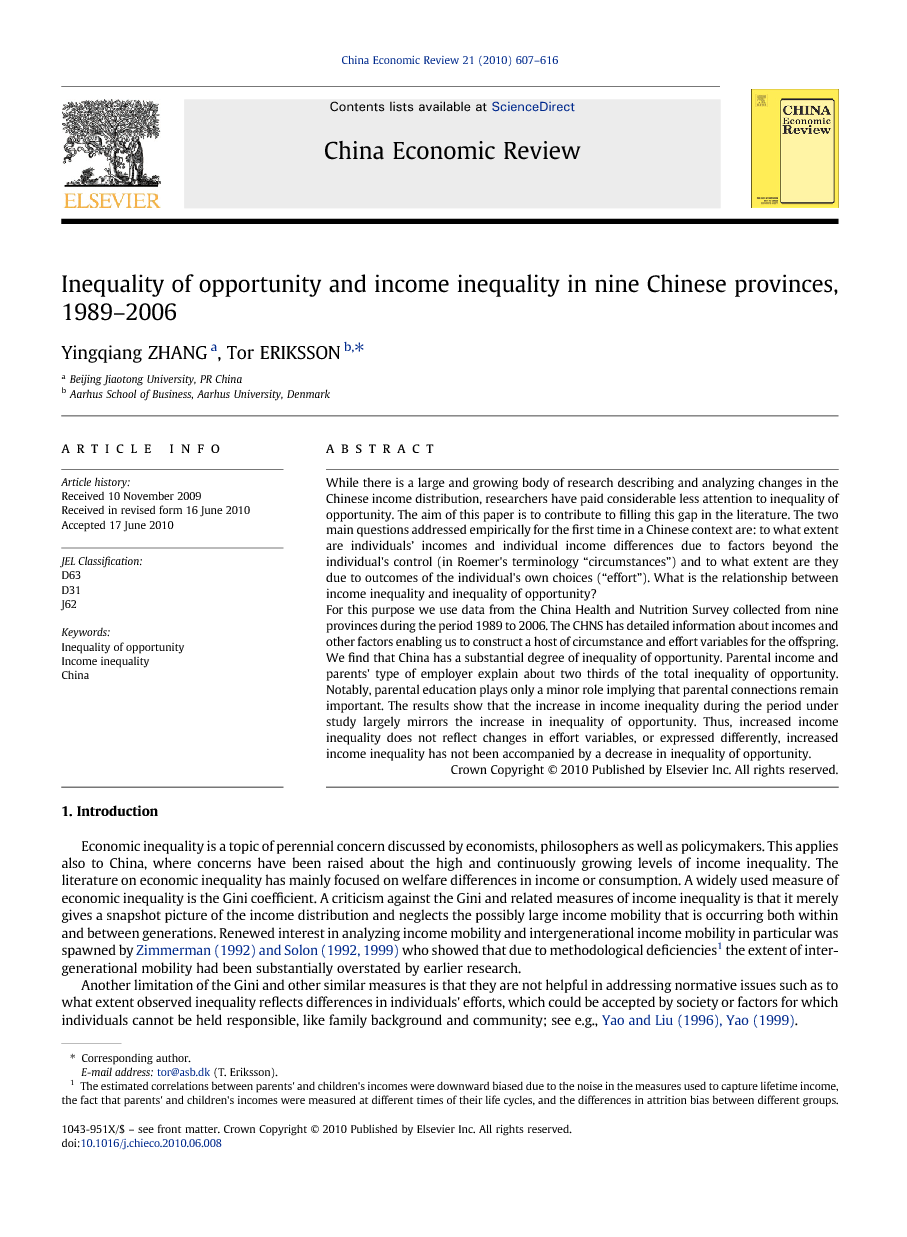 Economic inequality is a topic of perennial concern discussed by economists, philosophers as well as policymakers. This applies also to China, where concerns have been raised about the high and continuously growing levels of income inequality. The literature on economic inequality has mainly focused on welfare differences in income or consumption. A widely used measure of economic inequality is the Gini coefficient. A criticism against the Gini and related measures of income inequality is that it merely gives a snapshot picture of the income distribution and neglects the possibly large income mobility that is occurring both within and between generations. Renewed interest in analyzing income mobility and intergenerational income mobility in particular was spawned by Zimmerman, 1992, Solon, 1992 and Solon, 1999 who showed that due to methodological deficiencies1 the extent of inter-generational mobility had been substantially overstated by earlier research. Another limitation of the Gini and other similar measures is that they are not helpful in addressing normative issues such as to what extent observed inequality reflects differences in individuals' efforts, which could be accepted by society or factors for which individuals cannot be held responsible, like family background and community; see e.g., Yao and Liu, 1996 and Yao, 1999. Roemer (1998) emphasizes the importance of making this distinction. He argues that the factors which affect an individual's advantage should be divided into two categories. One is called ‘circumstances’ and includes factors like family background, region of birth and gender, on which individuals have had no influence. The other category is called ‘efforts’ and consists of outcomes of the individual's choices like her education or type of work. In general, we know considerably more about the impact of the effort factors on individuals' outcomes than about how the outcomes are affected by the circumstance factors. However, economic and social research has recently paid increasing attention to the relative importance of circumstances in influencing individuals' wages or incomes; see e.g., Bourguignon et al., 1993, Bourguignon et al., 2007, Bourguignon et al., 2007 and Ferreira and Gignoux, 2008. In this paper we will add to this growing literature by analyzing inequality of opportunity, its development and differences therein within China. Empirical research on inequality of opportunity can be motivated in at least three ways. Firstly, it has been argued that inequality of opportunity is as an important concept as inequality of outcomes (Ferreira et al. (2008)). In fact, income inequality is not always positively correlated with inequality of opportunity; see Lefranc et al. (2008) for empirical evidence. Secondly, inequality of opportunity has a significant influence on how people view inequality of outcomes, social inequality, and income redistribution policy and social policies; see Alesina and Angeletos (2005); Bénabou and Tirole (2006). Osberg and Smeeding's (2006) analysis which uses survey data from several countries demonstrates that people oppose inequality if it is due to bad luck, but less, or not at all, if it is due to low effort. Finally, it can be argued that equality of opportunity is a key measure of economic development. If economic development means approaching distributive justice, this in turn implies that a significant degree of the income or earnings inequality ought to be due to effort, not to circumstances beyond the individuals' control. Prior to 1978, China was a strictly planned economy where about 90% of the society's resources were distributed by the State. Equalitarianism was a key element of this model resulting in very low income inequality, in particular considering the size of the country and the vast regional differences in natural resources and other conditions for production. Thus, according to a household sample survey carried out by CNBS (Chinese National Bureau of Statistics), in 1978 the Gini coefficients of urban and rural areas were 0.16 and 0.21, respectively.2 After China began her open door policy and adopted a more market-oriented approach, the proportion of state-owned companies has decreased significantly.3 At the same time private and foreign companies have expanded rapidly contributing to the average growth rate of 9.8% since 1978. Between 1978 and 2007 the annual real income per capita of rural residents increased from 133.6 yuan ($19.6) to 4,140.6 yuan ($606.2). Corresponding numbers for urban residents were 343.4 yuan ($50.3) and 13,785.8 yuan ($2,018.4), respectively. However, in parallel income inequality increased as well: according to the CNBS the Gini grew from 0.317 in 1978 to the internationally high level of 0.496 in 2006. This increase and the growing income gap between urban and rural areas as well as between coastal and inland districts – see Fig. 1 – are often considered as one of China's most critical social problems for sustained growth and development. While there is a large literature describing the changes in the Chinese income distribution since the economic reform4, substantially less is known about inequality of opportunity in China and about changes therein. Consequently, the same is also true for questions like: What is the relationship between income inequality and inequality of opportunity? Which circumstance factors are important in generating inequality of opportunity? How does inequality of opportunity in China look like in an international perspective? To the best of our knowledge this paper is the first attempt to provide some evidence to answer these and related questions. For this purpose we use data from the China Health and Nutrition Survey (CHNS) collected from nine provinces during the period 1989 to 2006. We estimate parametric models by means of robust OLS regression in order to quantify the role of parental household income and size, parents' education and employer, region of origin, gender and age in generating inequality of opportunities and inequality in current income. We find that the parents' household income, father's and mother's employer explain 23, 19 and 20%, respectively, of total inequality of opportunity. Notably, parents' type of employment is more important their education in explaining the earnings of the offspring, implying that parental connections (guanxi) continue to play a central role. However, the influence of both parents' employer and household income has decreased somewhat since the mid-1990 s. The remainder of the paper is structured as follows. Section 2 gives a short review of the inequality of opportunity literature; Section 3 presents the data; the fourth section contains the empirical model and estimation results. Finally, Section 5 concludes.

This paper presents the first available evidence on inequality of opportunity in China. We use data from the China Health and Nutrition Survey from years 1989 to 2006 to examine to which extent income inequality reflects differences in individuals' incomes due to “circumstance” factors, that is, factors beyond their control. Summing up briefly our findings, they are: China has a high degree of inequality of opportunity. A large fraction of economic advantage or disadvantage is transmitted from one generation to the next, within families. Parental income and parent's type of employer explain roughly two thirds of the total inequality of opportunity, whereas in contrast to findings from other emerging economies, parental education plays a minor role. Thus, parental connections remain an important transmission mechanism for the intergenerational persistence of economic advantage and disadvantage. Our results show that the increase in income inequality during the period largely mirrors an increase in inequality of opportunity. Obviously, this adds to the severity of income inequality problem in China and implies that further policies at breaking the guanxi and at equalization of education and employment opportunities for people for disadvantages areas called for. For further research on intergenerational income mobility and equality of opportunity it would be important to have access to larger data sets and to have better measures of life-time earnings (especially for the offspring). It would also be valuable to have data that include some of the major cities like Beijing, Shanghai or Guangzhou as well as some of the least developed provinces.