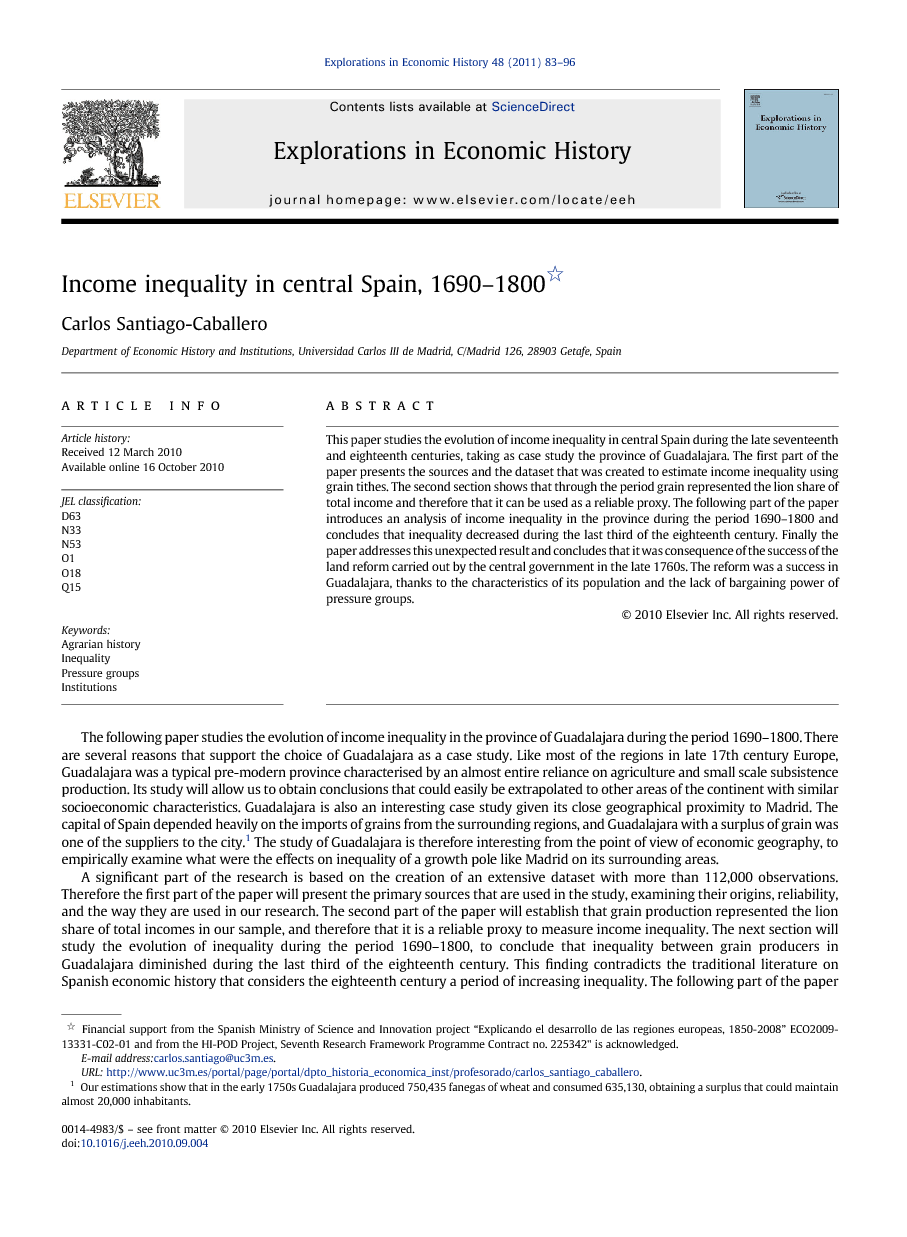 This paper studies the evolution of income inequality in central Spain during the late seventeenth and eighteenth centuries, taking as case study the province of Guadalajara. The first part of the paper presents the sources and the dataset that was created to estimate income inequality using grain tithes. The second section shows that through the period grain represented the lion share of total income and therefore that it can be used as a reliable proxy. The following part of the paper introduces an analysis of income inequality in the province during the period 1690–1800 and concludes that inequality decreased during the last third of the eighteenth century. Finally the paper addresses this unexpected result and concludes that it was consequence of the success of the land reform carried out by the central government in the late 1760s. The reform was a success in Guadalajara, thanks to the characteristics of its population and the lack of bargaining power of pressure groups.

The use of information from grain tithes seems to be a reliable source to estimate the evolution of income in Guadalajara. The use of the source shows that the period 1770–1800 in the province is an age of decreasing inequality, when not only the number of grain producers increased, but also when the differences between them diminished. Taking the period 1690–1800 as benchmark we observe that against what is suggested by the literature in the case of Spain, the eighteenth century was a period when inequality was reduced in Guadalajara. The study of the Gini Coefficient and the distribution of grain producers, indicate that this convergence was characterised by a significant reduction in the number of very small and small producers. Small villages enjoyed low levels of income inequality during most of the century and therefore there was almost no room to catch up. However, in larger municipalities inequality levels were higher and there was still room to reduce the gap between big and small producers. A detailed analysis of changes in inequality shows that this was the case and that most of the reductions of income inequality were based on catching up of small producers in big villages. In a similar way the municipalities that did not have rural workers benefited from a larger decrease in inequality levels. On the other hand access to the major road network in Spain was not a significant force in the reduction of inequality. The second finding explains how the unexpected decrease in inequality took place. Small peasants were able to increase the size of their exploitations by having access to the privatisation of common lands promoted by the central government. Unlike the period 1740–1770, the availability of the new lands (normally pastures) made possible the absorption of new producers in better conditions. The redistribution of common lands allowed many small peasants to produce above subsistence level and therefore to take advantage of trade and high grain prices. The proportion of common lands was higher in larger villages, a situation that explains why the reduction in inequality was more intense in these sort of municipalities. The reform that failed in other parts of Spain was successful in Guadalajara thanks to the lack of bargaining power of pressure groups, a result of the unique characteristics of the population in Guadalajara. These characteristics combined the best features of the two models of agricultural production in Spain; the high proportion of producers (and lack of rural workers) of the north and the low pressure on natural resources of the south. Therefore, there was land to share and peasants able to fulfil the conditions imposed by the government to access it. In addition, the similar characteristics that existed between grain producers in Guadalajara reinforced the process. In other words and following Engerman and Sokoloff's arguments, the existence of an egalitarian society made possible the adoption of an economically successful reform.