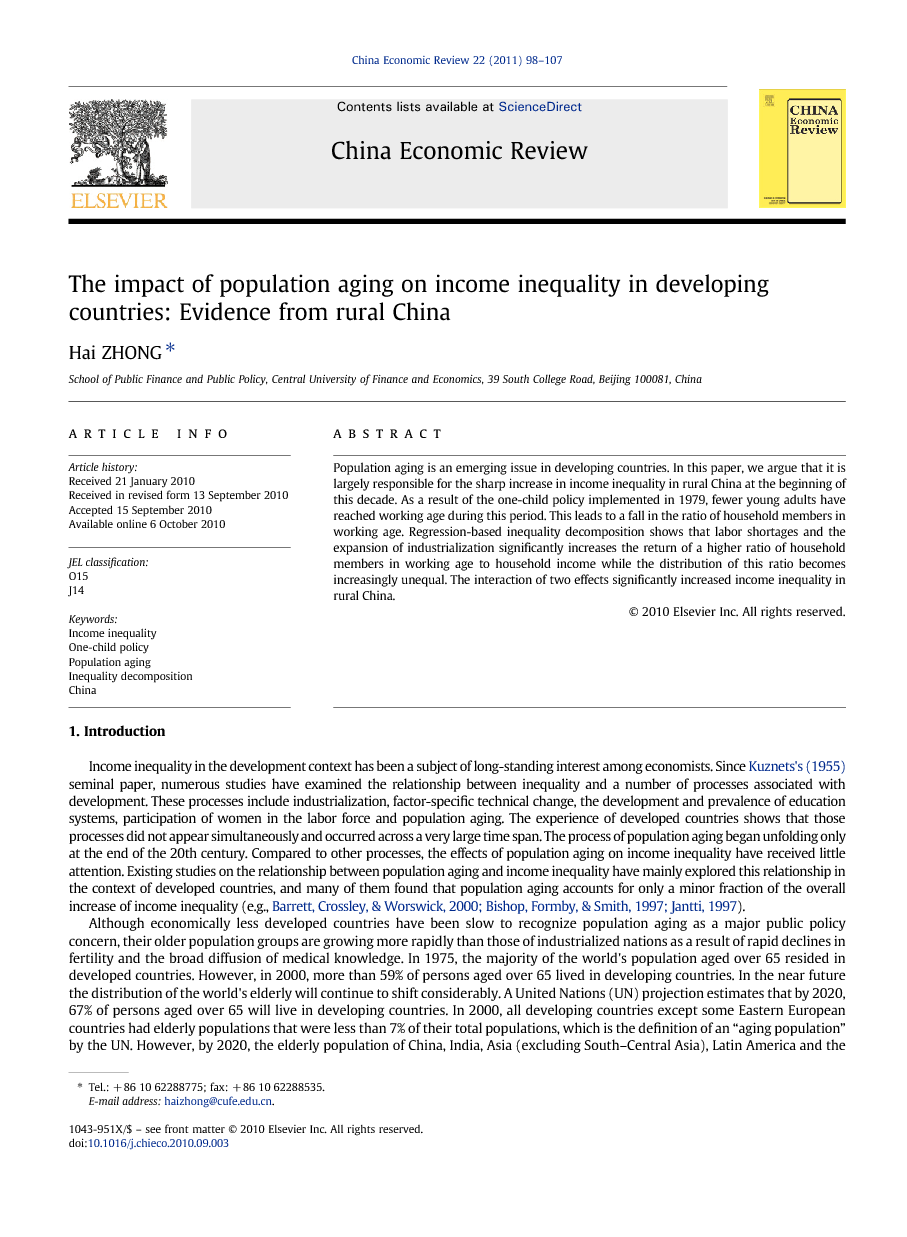 Population aging is an emerging issue in developing countries. In this paper, we argue that it is largely responsible for the sharp increase in income inequality in rural China at the beginning of this decade. As a result of the one-child policy implemented in 1979, fewer young adults have reached working age during this period. This leads to a fall in the ratio of household members in working age. Regression-based inequality decomposition shows that labor shortages and the expansion of industrialization significantly increases the return of a higher ratio of household members in working age to household income while the distribution of this ratio becomes increasingly unequal. The interaction of two effects significantly increased income inequality in rural China.

In this paper, we investigated the relationship between population aging and income inequality in rural China using the CHNS data. We found that a significant portion of the sharp increase of income inequality at the beginning of this decade can be attributed to demographic change. Population aging is emerging as an important matter of policy issue in developing countries, and its relationship with income inequality has received little attention. Chu and Jiang (1997) examined the impact of demographic transition in Taiwan on the changes in income inequality from 1978 to 1993. They found that population aging was negatively associated with income inequality. One possible explanation for this result is that the source-specific Gini decomposition approach used in their study could not control the influence of the development and prevalence of education system, industrialization and establishment of social security systems occurred in this period. Cameron (2000) uses a semi-parametric decomposition approach to examine poverty and inequality in Java. She found that 5.8% of the change in the Gini coefficient between 1984 and 1990 could be explained by population aging. Although the semi-parametric approach imposes few structural assumptions, it tells us little about the mechanism through which population aging may affect income inequality. Comparing both of these studies to ours, we find that the degree of population aging, increase of inequality in the examination period, and contribution of population aging to inequality are all much more severe in rural China. A theory on the link between population aging and income inequality in developing countries is an interesting research question that deserves further study. The process of population aging began unfolding only at the end of the 20th century. Existing empirical studies find little impact of population aging on income inequality in the developed countries, and thus this relationship has received little attention in the theoretical literature. The WVW decomposition employed in our study may provide some basic intuitions for developing a formal theory on the relationship between population aging and income inequality in developing countries as follows. As we discussed in the last section, the WVW approach can decompose the relative contribution of a particular variable to the total income inequality into two terms: the elasticity of income with respect to this variable, and the distribution of this variable. The process of population aging began to emerge at the first half of this decade in China. Labor shortage and expansion of industrialization significantly increased the elasticity of income with respect to the labor ratio in the household. At the same time, the distribution of labor ratio also became increasingly unequal. The interaction of these two effects significantly increased income inequality in rural China. The reduction of income inequality is an important policy objective for the Chinese government over the next few years. The results of our study indicate that population aging makes a significant contribution to the sharp increase in income inequality in rural areas in recent years. We conducted similar analysis with the urban samples of the CHNS data, and could not find a statistically significant relationship between demographic changes and increase of income inequality in urban China.9 A plausible explanation for this result is that, as in developed countries, most seniors in urban areas are covered by well-established public pension schemes, which were basically non-existent in rural areas during the examining period in our study. With pensions, the impact of the exit from the labor force on household income is much milder in urban areas, and thus has a much smaller impact on income inequality. Therefore, one policy implication of our analysis is that the establishment of a basic old age security system in rural areas might be useful to reduce income inequality. Considering other results in the last section, we know that there are some variables that may have important policy implications for the reduction of income inequality. For example, the government can encourage the development of local industry in less affluent regions, subsidize the education of children in lower income households, and establish public health insurance plans for the poor. As shown by the WVW decomposition, successful implementation of those policies should change either the mean or distribution of the relevant variables and consequently reduce income inequality. Population aging is an important issue not only from the perspective of income inequality, an imbalanced population structure will influence the social and economic development from many other respects. In the long run, the Chinese government should reconsider whether the one-child policy should be continued. As an interim policy, it has achieved its objective, and now is the time for adjusting the policy (see Cai, 2006). Although the CHNS data used in this study covers nine provinces that vary substantially in geography, economic development and public resources, it is not nationally representative. Gustafsson and Li (2002) show that different combinations of provinces may lead to different results for inequality analysis. One area that deserves further exploration is a comparison of the results using different datasets. Unfortunately, very few recent cycles of most household surveys in China are publicly available. As emphasized in Benjamin, Brandt, and Giles (2005), it would be helpful to broaden participation in the evaluation of inequality issues by opening up the survey data to more users. Population aging will impact society in multiple ways, and it is therefore crucial for policy makers to produce a development strategy that tackles the socio-economic challenges of an aging population.