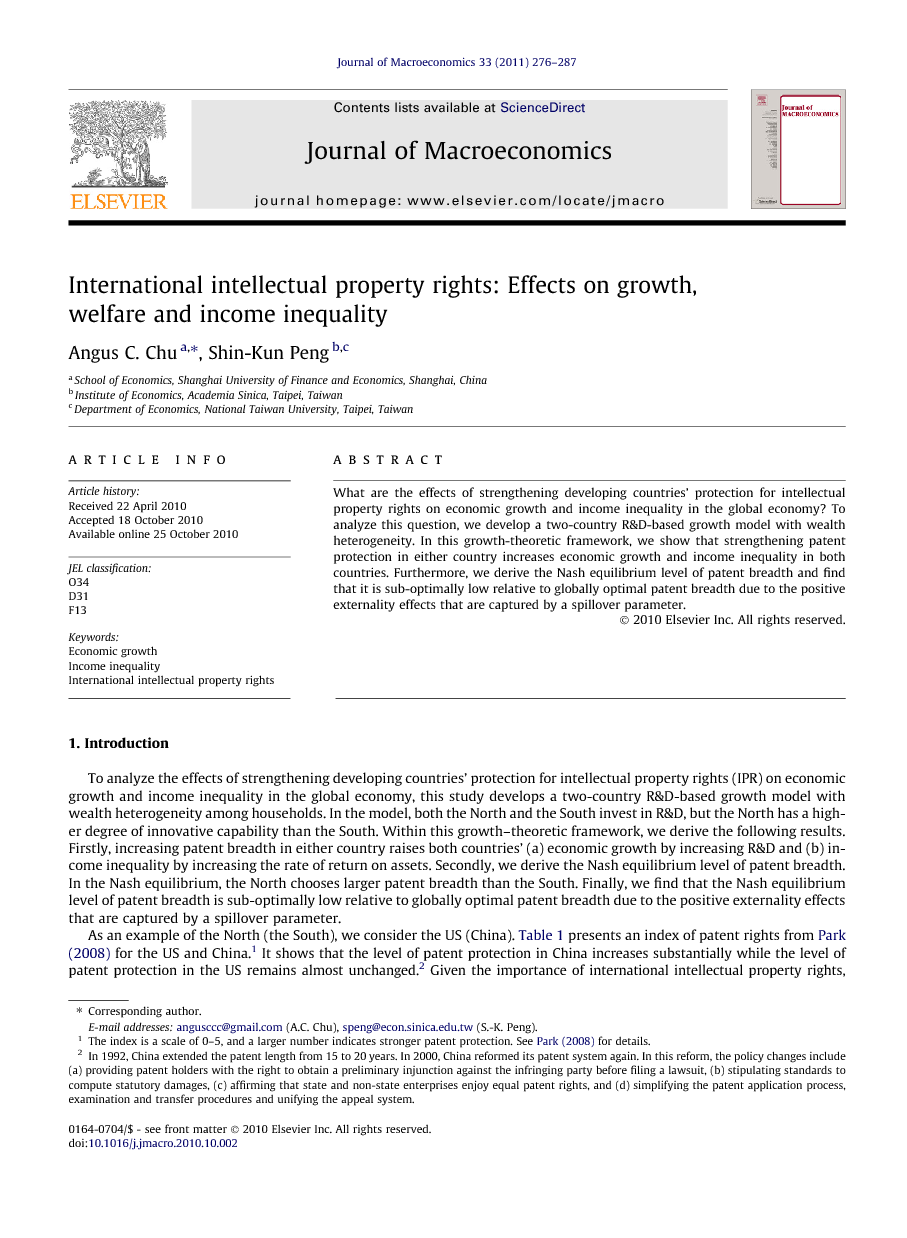 What are the effects of strengthening developing countries’ protection for intellectual property rights on economic growth and income inequality in the global economy? To analyze this question, we develop a two-country R&D-based growth model with wealth heterogeneity. In this growth-theoretic framework, we show that strengthening patent protection in either country increases economic growth and income inequality in both countries. Furthermore, we derive the Nash equilibrium level of patent breadth and find that it is sub-optimally low relative to globally optimal patent breadth due to the positive externality effects that are captured by a spillover parameter.

To analyze the effects of strengthening developing countries’ protection for intellectual property rights (IPR) on economic growth and income inequality in the global economy, this study develops a two-country R&D-based growth model with wealth heterogeneity among households. In the model, both the North and the South invest in R&D, but the North has a higher degree of innovative capability than the South. Within this growth–theoretic framework, we derive the following results. Firstly, increasing patent breadth in either country raises both countries’ (a) economic growth by increasing R&D and (b) income inequality by increasing the rate of return on assets. Secondly, we derive the Nash equilibrium level of patent breadth. In the Nash equilibrium, the North chooses larger patent breadth than the South. Finally, we find that the Nash equilibrium level of patent breadth is sub-optimally low relative to globally optimal patent breadth due to the positive externality effects that are captured by a spillover parameter. As an example of the North (the South), we consider the US (China). Table 1 presents an index of patent rights from Park (2008) for the US and China.1 It shows that the level of patent protection in China increases substantially while the level of patent protection in the US remains almost unchanged.2 Given the importance of international intellectual property rights, we apply our theoretical results to analyze the macroeconomic implications on the global economy. In addition to analyzing the growth effects of international patent policy, the present study differs from previous studies by developing a growth–theoretic model with heterogeneous households to analyze the effects of international patent policy on income inequality in addition to economic growth. We find that strengthening patent protection in either country increases economic growth and income inequality in both countries. This result suggests that it is important to take into account how intellectual property rights affect the income distribution within a country given that rising inequality can be an important social concern. For example, China amended its patent law in 2000 prior to joining the World Trade Organization in 2001. Since this amendment, the annual growth rate of applications for invention patents in China has increased to 23% (compared to less than 10% before 2000). Hu and Jefferson (2009) provide empirical evidence to show that the patent-law amendment in 2000 is a major factor for China’s recent surge in patenting activities. Also, R&D as a share of GDP in China increases from an average of about 0.7% in the 1990s to 1.49% in 2007.3 At the same time, the rising income inequality in China poses the country a serious challenge on domestic stability. In 2007, China’s Gini coefficient rises to 0.47 that is above the threshold of 0.45 indicating potential social unrest. Our theoretical analysis suggests that strengthening patent protection in China could have worsened its income inequality. In a panel regression, Adams (2008) finds that strengthening patent protection indeed has a positive and statistically significant effect on income inequality. His estimates imply that increasing Park’s (2008) index by one (on a scale of 0–5) is associated with an increase in the Gini coefficient of 0.01–0.02 (on a scale of 0–1) in developing countries. We should emphasize that there are also other important factors contributing to the rising income inequality in China, and patent policy is only one of them. Our study relates to the literature on IPR protection and North–South trade. Early studies in this literature focus on the effects of IPR in reducing imitation from the South and encouraging technology transfer from the North through licensing or foreign direct investment. In these studies, innovative activities are usually assumed to take place only in the North.4 However, two other important reasons for strengthening IPR in the South are (a) to provide incentives for the North to develop technologies that are also used by the South,5 and (b) to provide incentives for the South to invest in innovative activities.6 To fill in this gap in the literature, recent theoretical studies, such as Lai and Qiu, 2003 and Grossman and Lai, 2004, consider the important role of international intellectual property rights in providing sufficient incentives for innovation in both the North and the South. Our paper follows this branch of studies to focus on this aspect of international patent policy. Lai and Qiu, 2003 and Grossman and Lai, 2004 derive the Nash equilibrium patent length in an open-economy variety-expanding model, in which both the North and the South invest in R&D, and analyze the welfare effects of harmonizing IPR protection. We complement these interesting studies by deriving the Nash equilibrium level of patent breadth and analyzing the effects of raising patent breadth on the growth–inequality tradeoff using a quality-ladder model with heterogeneous households. To our knowledge, our study is the first to analyze the effects of international patent policy on social welfare, economic growth and income inequality simultaneously. Since the seminal study of Kuznets (1955), the tradeoff between growth and inequality has been an important issue in economics. On one hand, early theoretical and empirical studies tend to find a negative growth–inequality relationship.7 On the other hand, the more recent studies tend to find a positive relationship.8Forbes (2000) finds a positive empirical growth–inequality relationship and argues that the different results in previous studies are due to omitted-variable bias and measurement error. García-Peñalosa and Turnovsky, 2006 and Garcı´a-Peñalosa and Turnovsky, 2007 argue that the theoretical growth–inequality relationship should be ambiguous and should depend on the underlying structural changes. Incorporating wealth heterogeneity into an AK growth model, they show that a positive relationship is more likely to emerge. Although the capital-accumulation-driven growth models are useful frameworks for analyzing many macroeconomic issues, they are not suitable for evaluating innovation policies. Therefore, this study incorporates wealth heterogeneity into an open-economy R&D growth model to analyze the effects of international patent policy.9 As argued by Chen and Turnovsky (2010), “…virtually the entire growth–inequality literature is restricted to a closed economy, which is a severe shortcoming given the increasing openness characterizing most economies.” The rest of this paper is organized as follows. Section 2 presents the model. Section 3 defines the equilibrium and presents the results. Section 4 concludes with some suggestions for future research.

This paper analyzes the macroeconomic effects of international intellectual property rights. In summary, strengthening patent protection in developing countries increases global economic growth but also worsens income inequality in both developed and developing countries. To derive these theoretical results, we incorporate wealth heterogeneity among households into an open-economy quality-ladder model. Our model belongs to the class of first-generation R&D-based growth models that exhibit scale effects (i.e., a larger economy experiences faster growth). We eliminate scale effects by normalizing each country’s population size to unity.22 In our model, we have abstracted from some interesting issues, such as licensing, foreign direct investment, and North–South product cycles. In reality, both of (a) technology transfer from the North to the South and (b) providing sufficient incentives for the South to innovate are important reasons for strengthening IPR in the South. For analytical tractability and the relative lack of attention to the latter issue in the literature, we follow Lai and Qiu, 2003 and Grossman and Lai, 2004 to focus on (b) only. Therefore, one direction for future research is to account for these issues in a model with heterogeneous households. Furthermore, given that the enforcement of IPR is as important as the statutory law in reality, it would be interesting for future studies to consider IPR enforcement as well. Although our model is designed to analyze the positive externality associated with IPR protection in developed and developing countries, the two countries in the model can easily be relabeled as two developed countries by assuming that they have similar levels of R&D productivity. In this case, the Nash equilibrium level of patent protection continues to be lower than the globally optimal level as long as α is greater than zero. In other words, a coordination failure of patent policy can exist even among developed countries suggesting the importance of also evaluating whether the level of IPR protection chosen by developed countries is indeed optimal from the perspective of global welfare.