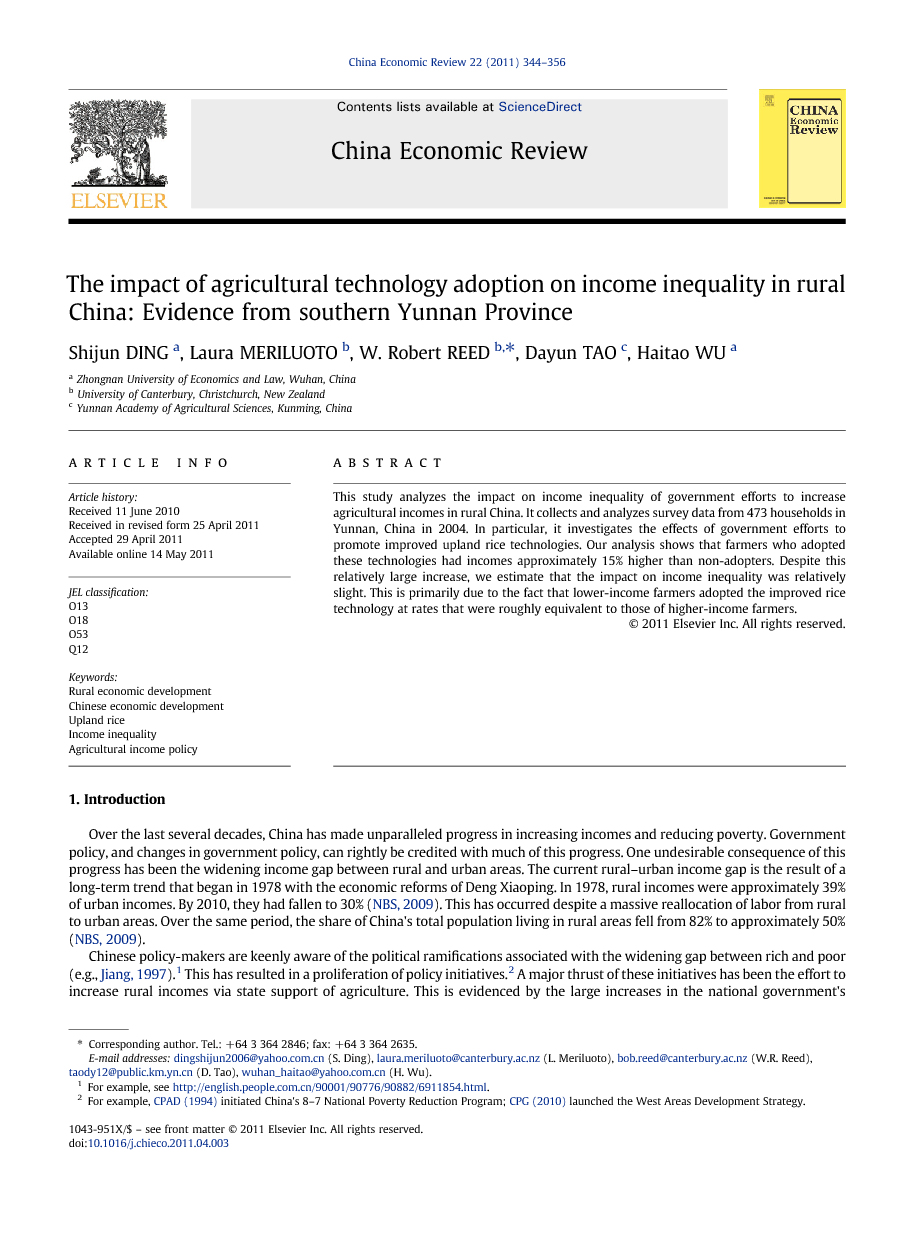 This study analyzes the impact on income inequality of government efforts to increase agricultural incomes in rural China. It collects and analyzes survey data from 473 households in Yunnan, China in 2004. In particular, it investigates the effects of government efforts to promote improved upland rice technologies. Our analysis shows that farmers who adopted these technologies had incomes approximately 15% higher than non-adopters. Despite this relatively large increase, we estimate that the impact on income inequality was relatively slight. This is primarily due to the fact that lower-income farmers adopted the improved rice technology at rates that were roughly equivalent to those of higher-income farmers.

Over the last several decades, China has made unparalleled progress in increasing incomes and reducing poverty. Government policy, and changes in government policy, can rightly be credited with much of this progress. One undesirable consequence of this progress has been the widening income gap between rural and urban areas. The current rural–urban income gap is the result of a long-term trend that began in 1978 with the economic reforms of Deng Xiaoping. In 1978, rural incomes were approximately 39% of urban incomes. By 2010, they had fallen to 30% (NBS, 2009). This has occurred despite a massive reallocation of labor from rural to urban areas. Over the same period, the share of China's total population living in rural areas fell from 82% to approximately 50% (NBS, 2009). Chinese policy-makers are keenly aware of the political ramifications associated with the widening gap between rich and poor (e.g., Jiang, 1997).1 This has resulted in a proliferation of policy initiatives.2 A major thrust of these initiatives has been the effort to increase rural incomes via state support of agriculture. This is evidenced by the large increases in the national government's agricultural budget that have occurred in recent years. For example, national budget spending on agriculture increased in real terms from 25 billion RMB Yuan in 1990, to 81 billion RMB Yuan in 2000, and to 533 billion RMB Yuan in 2009 (MOF, 2009).3 One key component of the government's agricultural policy has been the encouragement of productivity improvements in “marginal” agricultural land in rural areas via local extension services.4 These areas are of particular importance because a large portion of low income households are congregated there. Improving their incomes is key to reducing rural–urban income inequality in China. A potential problem with these efforts is that they may increase local income inequality. Indeed, a large literature, stimulated by interest in the consequences of the “green revolution,” reports that agricultural technology adoptions can sometimes worsen income inequality (Freebairn, 1995, Griffin, 1974, Lipton and Longhurst, 1989 and Pearse, 1980). Numerous studies have investigated income inequality in rural China (Chen & Zhang, 2009). Benjamin, Brandt, and Giles (2005) report that most rural inequality is due to local (within village) differences rather than differences across villages or provinces. While studies reach different conclusions as to the source of local income disparities, Ravallion and Chen (1999) conclude that when it comes to farm income, grain production is a major contributing factor. Given this interest in rural income inequality, it is perhaps surprising that little is known about the distributional impacts of government-aided productivity improvements in Chinese farming communities. We are aware of only one study that directly addresses the impact of improved agricultural technology. Lin (1999) investigated the effects of F1 hybrid rice adoption. He used data from a cross-sectional survey of 500 households in 5 counties of Hunan Province taken in December 1988 and January 1989. While he did not come to a definitive conclusion regarding income inequality, Lin found that adopters saw their rice incomes increase; and non-adopters saw their non-rice incomes increase. The latter mitigated the income inequality effects of the former. An important difference between our study and Lin's is that his study focused on hybrid, paddy rice adoption in lowland areas. In contrast, our study focuses on hybrid rice adoption in upland areas. It is the latter which is now receiving much attention in the development literature (Conway, 1999, Fan and Hazell, 2000 and Pender, 2008). Pender (2008, page 7) writes: During the past several decades, dramatic improvements in agricultural productivity and the reduction of poverty have been achieved in many countries of South and East Asia. …Despite this progress, hundreds of millions of rural people in less-favored environments – areas where rainfed agriculture dominates and where there are critical biophysical constraints such as low and uncertain rainfall, steep slopes and poor soil, or socio-economic constraints such as poor access to markets, infrastructure and services – have obtained much less benefit from this progress. Gustaffson and Li's (2002) finding of substantial heterogeneity in income growth rates across counties in rural China is a reminder that one-size-fits-all generalizations should be viewed with caution. There is therefore a need for additional studies to confirm or disconfirm the findings of Lin's (1999) research. This study meets that need by analyzing the income effects of technology adoptions associated with the introduction of an improved upland rice variety. We draw on a cross-sectional survey of rural households in Yunnan province conducted in 2005. While our study differs from Lin in some important respects, it reaches a similar conclusion. We find no evidence that the adoption of improved upland rice contributes to increased income inequality. Our study proceeds as follows. Section 2 reviews Lin's (1999) theoretical analysis of the impact of improved rice technology on household incomes. Section 3 presents some background concerning the agricultural technology adoption studied here. Section 4 discusses the data used in our empirical analyses. Section 5 reports the results of our investigations. Section 6 concludes.

This study uses household income data from farmers in rural China to evaluate the effect of improved upland rice technology on income inequality. Income inequality is a serious concern in China, where the rural–urban income gap has been growing wider in recent years. As a result, both national and provincial governments have taken numerous steps to increase agricultural incomes. A key component of these is government efforts to increase productivity via Agricultural Technology Extension Stations. These have been widely used to promote new technologies among rural farmers. A concern is that these government efforts may themselves induce greater local income inequalities if the benefits of government support are disproportionately distributed. We look at one such effort in Yunnan Province. Here, rice breeders have developed a new upland rice hybrid. In combination with chemical fertilizers and terracing, these improved upland rice varieties offer substantial productivity gains over traditional upland rice varieties. Village-based technology extension programs have been instrumental in encouraging the uptake of this improved technology. Our study compares adopters with non-adopters to estimate the income effects of technology adoption, along with the corresponding impact on income inequality. Approximately half of the 473 households in our survey adopted the improved upland rice technology. We estimate that total incomes were approximately 14–16% higher for adopters. Furthermore, we find that adopters experienced not only higher incomes from planting upland rice, but also from planting other cash crops. The latter result is contrary to the finding of Lin (1999), whose model predicts higher incomes from non-rice production for non-adopters. Despite the fact that the associated income effects of improved upland rice technology are relatively large, we find no evidence to indicate that these translate into substantial increases in local income inequality. This is due to the fact that lower-income farmers adopted technology at rates that were roughly equivalent to those of higher-income farmers. Accordingly, we reach a conclusion that is broadly consistent with the findings of Lin (1999), despite there being substantial differences in our studies. While further studies on this subject are called for, our research provides some degree of encouragement that government efforts to raise rural, agricultural incomes are not being undermined by the exacerbation of local income disparities.