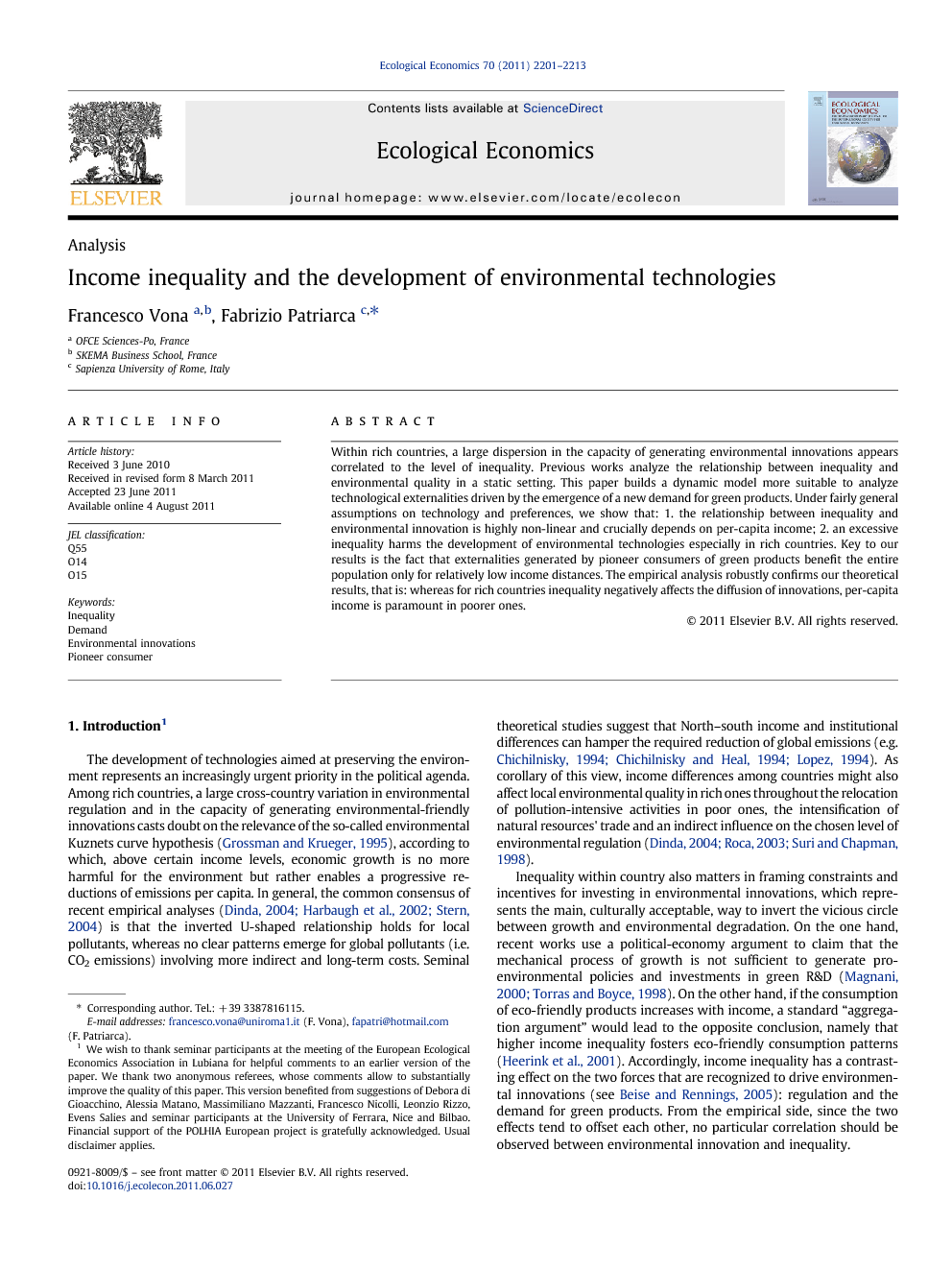 Within rich countries, a large dispersion in the capacity of generating environmental innovations appears correlated to the level of inequality. Previous works analyze the relationship between inequality and environmental quality in a static setting. This paper builds a dynamic model more suitable to analyze technological externalities driven by the emergence of a new demand for green products. Under fairly general assumptions on technology and preferences, we show that: 1. the relationship between inequality and environmental innovation is highly non-linear and crucially depends on per-capita income; 2. an excessive inequality harms the development of environmental technologies especially in rich countries. Key to our results is the fact that externalities generated by pioneer consumers of green products benefit the entire population only for relatively low income distances. The empirical analysis robustly confirms our theoretical results, that is: whereas for rich countries inequality negatively affects the diffusion of innovations, per-capita income is paramount in poorer ones.

The development of technologies aimed at preserving the environment represents an increasingly urgent priority in the political agenda. Among rich countries, a large cross-country variation in environmental regulation and in the capacity of generating environmental-friendly innovations casts doubt on the relevance of the so-called environmental Kuznets curve hypothesis (Grossman and Krueger, 1995), according to which, above certain income levels, economic growth is no more harmful for the environment but rather enables a progressive reductions of emissions per capita. In general, the common consensus of recent empirical analyses (Dinda, 2004, Harbaugh et al., 2002 and Stern, 2004) is that the inverted U-shaped relationship holds for local pollutants, whereas no clear patterns emerge for global pollutants (i.e. CO2 emissions) involving more indirect and long-term costs. Seminal theoretical studies suggest that North–south income and institutional differences can hamper the required reduction of global emissions (e.g. Chichilnisky, 1994, Chichilnisky and Heal, 1994 and Lopez, 1994). As corollary of this view, income differences among countries might also affect local environmental quality in rich ones throughout the relocation of pollution-intensive activities in poor ones, the intensification of natural resources' trade and an indirect influence on the chosen level of environmental regulation (Dinda, 2004, Roca, 2003 and Suri and Chapman, 1998). Inequality within country also matters in framing constraints and incentives for investing in environmental innovations, which represents the main, culturally acceptable, way to invert the vicious circle between growth and environmental degradation. On the one hand, recent works use a political-economy argument to claim that the mechanical process of growth is not sufficient to generate pro-environmental policies and investments in green R&D (Magnani, 2000 and Torras and Boyce, 1998). On the other hand, if the consumption of eco-friendly products increases with income, a standard “aggregation argument” would lead to the opposite conclusion, namely that higher income inequality fosters eco-friendly consumption patterns (Heerink et al., 2001). Accordingly, income inequality has a contrasting effect on the two forces that are recognized to drive environmental innovations (see Beise and Rennings, 2005): regulation and the demand for green products. From the empirical side, since the two effects tend to offset each other, no particular correlation should be observed between environmental innovation and inequality. The purpose of this paper is to extend the analysis of the relationship between income inequality and the diffusion of green products to a dynamic framework where the development of environmental innovations is demand-driven. In particular, the emergence of a sizable demand for green products allows to gradually generate profit opportunities in key sectors such as transport, agriculture, construction and energy. The scaling-up of clean production methods in these sectors is associated to relevant non-linearities in so far as the development of the appropriate infrastructures favors the replacements of polluting consumption patterns with green ones. Our prior claim is that many environmental-friendly goods and services are produced and consumed locally (i.e. eco-building, renewable energy, recycling, bio-food, etc.), hence making internal markets particularly important to develop the technological know-how required to a large scale diffusion of these goods. Obviously, this claim does not apply to global emissions provided their public good nature. Therefore, our results should be interpreted having in mind that inequality within country is more likely to affect the search of technological solutions for local rather than for global problems. As well-documented in the literature on demand-driven innovations (e.g. Bertola et al., 2006 and Von Hippel, 1988), pioneer consumers have a higher capacity to buy initially more expensive green products, hence they trigger innovations that, throughout price reductions, might enable low-budget consumers to adopt these products (pioneer consumer effect, PC). On the other hand, however, an “excessive income distance” between the two types of consumers does not allow the entire society to benefit from the externalities generated by rich consumers (consumption polarization effect, CP2). Note that this positive trickle-down externality can stem from general consumption externalities (imitation behavior, demonstration effects, network externalities, etc.) and/or technological externalities. Here, we focus on the former effect in order to emphasize the role of inequality in shaping long-term technological advantages. In order to fix these ideas in a stylized way, we develop a simple theoretical model that establishes a weak asymmetry between green and non-green wants, being only the latter essential in an Inada sense. It will be shown that, under general assumptions on preferences and technological change, the effect of inequality on the diffusion of the new good is highly non-linear with the PC effect prevailing on the CP one for low levels of per-capita income, whereas the reverse occurs for high levels of per-capita income. Indeed, inequality harms the full development of environmental innovations, especially in those countries closer to the technological frontier and hence more likely to perform innovations (Aghion and Howitt, 2004). Due to a high income inequality, the positive externality brought about by the consumption of the rich might not be enough to enable the poor to buy eco-friendly goods, thereby the political-economy and the aggregation argument should go in the same direction. Moreover, high inequality not only pins down the emergence of appropriate environmental regulations, but also hampers the development of knowledge complementary to environmental-friendly behavior. Finally, an empirical validation of our model robustly confirms that inequality is strongly negatively related to various proxies of environmental innovation. This effect is particularly strong for richer countries whereas for poorer countries per-capita income is paramount. The rest of the paper is organized as follows. Section 2 connects the literature on demand and innovation to the one on inequality and environmental quality. Section 3 presents the model, the main theoretical results and possible extensions. Section 4 is devoted to an empirical validation of the model whereas Section 5 concludes.

The paper presents a demand-driven innovation approach to look at the relationship between inequality and environmental quality. We showed that more equal countries appear also the as ones having a comparative advantage in developing clean production methods. Our dynamic model enriches previous analyses in three directions. First, the externalities generated by pioneer consumers of green products benefit the entire population only for relatively low income distances. As a result, the contrasting effect of inequality on environmental innovations through regulation (+) and demand (−) would no longer occur when moving from a static to a dynamic context. Second, the theoretical results are obtained under very general assumptions on both preferences and the shape of technological change. As in Pfaff et al. (2004), it is enough to assume that environmental quality is less essential than a basic want, whereas the function of technological change should be either concave or at least not too convex. Finally, a more equal distribution of income generates irreversibilities in the development of knowledge complementary to environmental-friendly behavior. The empirical analyses robustly confirm our theoretical results as long as country-specific characteristics, i.e. technological expertise, tends to be less important than cross-country variations associated to differences in the Gini index. Moreover, whereas for rich countries inequality negatively affects the diffusion of environmental innovations, the effect of per-capita income tends to be paramount in poorer ones. Specific fields of innovation display similar patterns even if partially driven by country fixed characteristics and if the negative link inequality–innovation does not emerge for technologies at the real beginning of their technological-cycle, such as hybrid and electric cars. This evidence, jointly with the empirical evidence of an early comparative advantage of unequal countries in the more mature sector of renewable energy (i.e. the US, see Lanjouw and Mody, 1996), seems to confirm that pioneer consumers play an important role in explaining early stage of development of new products. The model can provide a new glance to the assessment of policies aimed at promoting the transition towards a sustainable development. In particular we analyze the possible ineffectiveness of a tax on the old goods connected to the regressive feature of such intervention. As a final remark, the paper offers policy insights that are also applicable to the case of cross-country inequality differences. Indeed, in a world opened to trade, a larger market for environmental technologies would in principle speed up the process of change. However, the extent to which markets for green products expands is limited by the high level of poverty in developing countries. As a possible solution, we suggest that allocating emission rights based on country income per capita, as prescribed by the Kyoto protocol, acts as a price differentiation in favor of the poor and hence will foster the development of green technologies. Further extensions will be devoted in providing a rigorous argument to this claim.