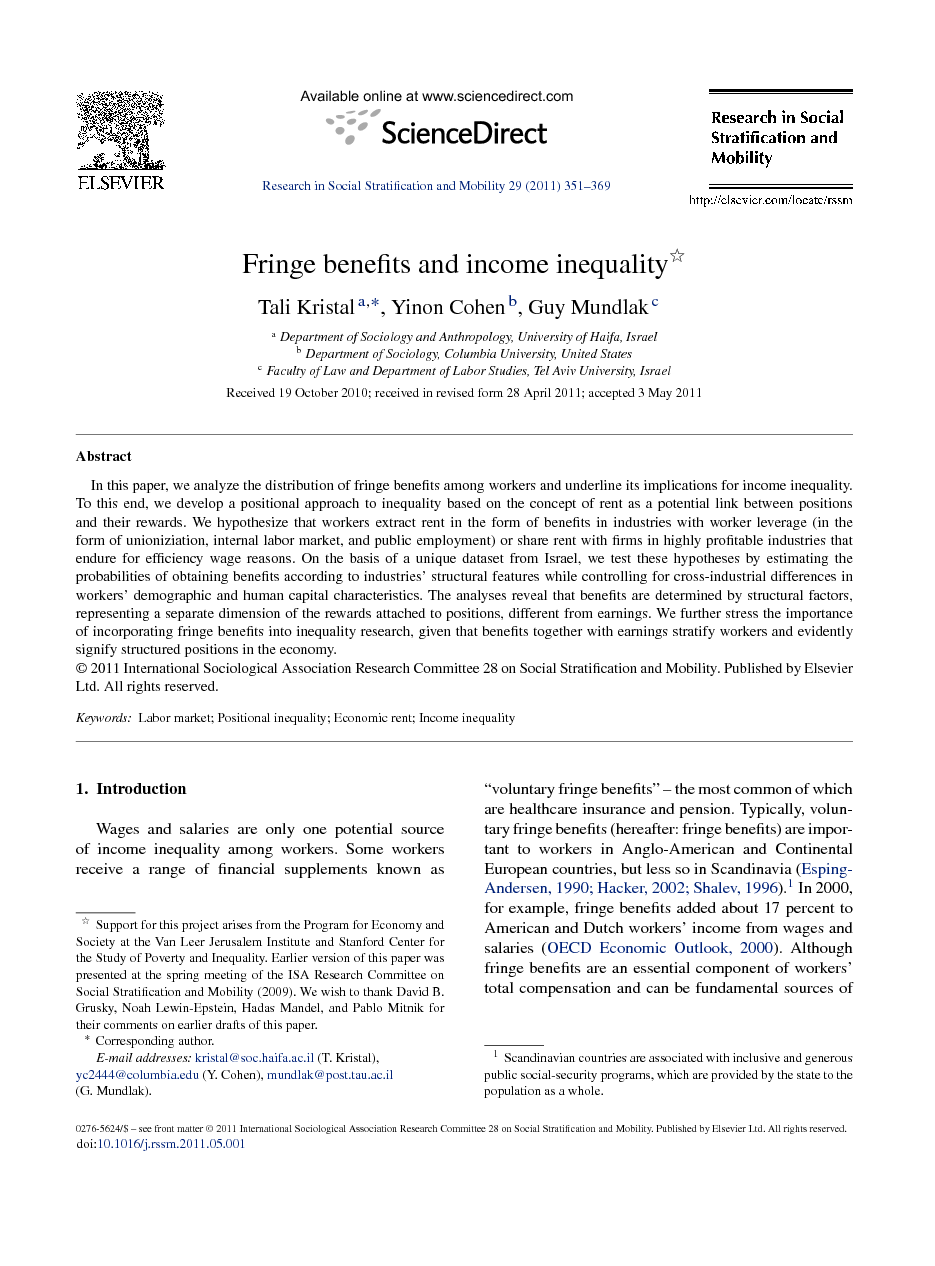 In this paper, we analyze the distribution of fringe benefits among workers and underline its implications for income inequality. To this end, we develop a positional approach to inequality based on the concept of rent as a potential link between positions and their rewards. We hypothesize that workers extract rent in the form of benefits in industries with worker leverage (in the form of unioniziation, internal labor market, and public employment) or share rent with firms in highly profitable industries that endure for efficiency wage reasons. On the basis of a unique dataset from Israel, we test these hypotheses by estimating the probabilities of obtaining benefits according to industries’ structural features while controlling for cross-industrial differences in workers’ demographic and human capital characteristics. The analyses reveal that benefits are determined by structural factors, representing a separate dimension of the rewards attached to positions, different from earnings. We further stress the importance of incorporating fringe benefits into inequality research, given that benefits together with earnings stratify workers and evidently signify structured positions in the economy.

Wages and salaries are only one potential source of income inequality among workers. Some workers receive a range of financial supplements known as “voluntary fringe benefits” – the most common of which are healthcare insurance and pension. Typically, voluntary fringe benefits (hereafter: fringe benefits) are important to workers in Anglo-American and Continental European countries, but less so in Scandinavia (Esping-Andersen, 1990, Hacker, 2002 and Shalev, 1996).1 In 2000, for example, fringe benefits added about 17 percent to American and Dutch workers’ income from wages and salaries (OECD Economic Outlook, 2000). Although fringe benefits are an essential component of workers’ total compensation and can be fundamental sources of inequality, they have rarely been analyzed in stratification research. In this paper, we hope to contribute to the study of fringe benefits and stratification research by presenting and estimating a structural, rent-based model for benefit determination, as well as estimating the effects of fringe benefits on the level of income inequality and speculate on their effects on the diversification in workers’ short-term economic interests. A unique, matched, Israeli employer–employee tax dataset enables us to empirically address these issues. The distribution of income from fringe benefits provides strong evidence in favor of the long-standing argument that “structure” matters for income inequality. In fact, there seems to be a broad consensus that benefits are linked to a job's characteristics (Kalleberg and Van Buren, 1996, O’Rand, 1986 and O’Rand and MacLean, 1986). Overall, fringe benefits are widespread in jobs at large business firms, unionized workplaces or in the public sector. Yet we still lack an agreed-upon explanation for what determines the likelihood of obtaining benefits, and more importantly, why some characteristics matter. Building on the insight that rewards are often tied to positions rather than to particular employees (Sørensen & Kalleberg, 1981) and the related idea of economic rent (Sørensen, 1996, Sørensen, 2000 and Wright, 1997), this paper goes beyond existing literature by elaborating the mechanisms through which benefits are linked to positions. Specifically, we argue that benefits are the result of practices of rent-extraction and rent-sharing by workers. Workers can extract benefits from firms due to their leverage in highly unionized industries, industries with established internal labor markets, as well as industries in the public sector. Alternatively, workers can obtain benefits by rent-sharing with employers in highly profitable firms that tend to follow efficiency wage practices. Analyzing benefits determination is one thing. Understanding their impact on inequality levels is another. Most research on income inequality analyzes the distribution of wages and salaries and thus might either underestimate or overestimate the level of income inequality among workers (Pierce, 2001 and Piketty and Saez, 2003) and between jobs (Jencks, Perman, & Rainwater, 1988). If benefits are determined exactly like earnings, inequality levels resulting from all income sources (namely earnings and benefits) should be higher than earnings inequality. If, however, fringe benefits compensate workers employed in low-wage jobs, as suggested by the classical economic view of compensating differentials (with roots in Smith, [1776] 1937), inequality measures that exclude these “hidden” rewards overestimate the level of income inequality among workers. Our dataset includes an estimation of the monetary value of fringe benefits, which usually is not readily available, and enables us to test their effect on the inequality level. We begin by reviewing the relevant theoretical literature, upon which we develop the subsequent theoretical and empirical analyses. In Section 3, we explain why Israel is a good case study for understanding the distribution of fringe benefits. In Section 4, we describe the data, measures, and the method of analysis. In Section 5, we test the hypotheses by estimating hierarchical logistic models estimating which workers, classified according to individual and industrial characteristics, are more likely to obtain additional income from fringe benefits. In the subsequent section, we analyze the effects of fringe benefits on overall level of income inequality among workers and between groups of workers depending on the level of benefits they receive (if at all). In Section 7, we highlight the social and political implications of the findings, suggesting that the process that creates inequality in benefits may intensify conflicts of interest between income groups depending on their sources of income.

The interplay among the structural characteristics of industries, fringe benefits, and inequality lies at the center of our study. Our key argument is that benefits are the result of practices of rent-extraction and rent-sharing by workers. To test our argument, we construct measures that typify the likelihood of rent-sharing by industries’ sources of profitability (i.e., economic scale, export) and rent-extraction by workers’ bargaining power (i.e., unionization, employment relations, public employment). We use the industrial data in hierarchical logistic models to estimate the impact of industries’ characteristics on workers’ likelihood of obtaining benefits net of the demographic attributes and human capital aspects of industries’ incumbents. We find that the mean worker's odds of obtaining pension and KH increase with an industry's economic scale, workplace size, unionization, and public employment and decrease with part-time employment. We are led to conclude that mechanisms of rent-sharing and rent-extraction explain benefits differences for equally paid (hence equally skilled) workers across industries. Our findings thus support structural accounts of inequality by demonstrating that there are important variations in income that cannot be entirely explained by standard competitive theories of income determination. Although Israel has its own historical uniqueness, we believe that the Israeli experience has wide applicability and that the theoretical arguments and findings could certainly be the basis for further research in other industrial countries. The findings further imply that fringe benefits combine with earnings to stratify workers, and even more importantly, benefits are indicative of structural positions in society. Since these positions relate not only to the employment contract, but also to firms’ advantageous positions in the product market, the level of fluidity between income clusters may be lower compared to the chances of mobility between occupational classes in Israel (Yaish, 2000). The more fundamental question, of course, is whether the underlying structure of rent-extraction and rent-sharing will come to shape how interests are understood and pressed (Sørensen, 1996 and Sørensen, 2000). Although income classes may not necessarily provide a better indication of life conditions compared to occupational classes (Grusky and Sorensen, 1998 and Weeden and Grusky, 2005), we wish to emphasize their likely implication for the diversification in workers’ short-term economic interests. Three recent examples of adversarial interests that have emerged from the diversification of positions among Israeli workers stand out. First, workers who obtain pension financed by their employer have no “objective” interest in supporting social legislation to ensure mandatory pension whereby all employers are legally obliged to provide pension to their workers. While such fragmentation of interests is difficult to measure and therefore remains somewhat speculative, there are other examples of real fragmentation that lend support to the first. In 2000, an attempt was made to levy a tax on allocations to KH, which failed due to strong objection by the Histadrut. More recently, there have been attempts to raise the tax on another workplace benefit – the company car. Again, the Histadrut has taken part in efforts to thwart this reform. In this context, the Histadrut is voicing the interests of workers with “good jobs” and seeking to preserve group-specific benefits. These examples demonstrate that workers belonging to certain income clusters may follow their own specific economic interests. Given the fragmentation of the working class into qualitatively distinct categories with little mobility between them, the interests of one group concerning labor legislation and tax policies may easily be contradictory to those of other income clusters. These Israeli examples are relevant to other countries too. In the U.S., the most obvious example is universal healthcare insurance. Since most high-income workers in the U.S. get healthcare insurance from their employers, they have no “objective” interest in supporting a universal system of public healthcare, which would be funded out of their taxes. That, however, clashes with the current high healthcare costs that apply to high-income workers as well. Nevertheless, recent polls show that people aged 65 and over, who are covered by Medicare (universal public health insurance coverage for the elderly), are more likely to oppose government healthcare.8 Another example is provided by Morgan and Cha (2007), who argue that as a result of the increasing income from capital during the 1990s some workers may have become less likely to support policies aligned with working-class interests. Thus, although workers who obtain rents in the form of benefits should be regarded as occupying “privileged appropriation locations within exploitation relations” (Wright, 1997, p. 22), rents have further implications for working-class cohesion and the strength of the labor movement. The unequal distribution of income from fringe benefits has not only widened the economic disparities between various groups of workers, but similar to contradictory class locations, has most likely also become a crucial divisive element, undermining the basis for broader social solidarity, and resulting in a weaker labor movement (Gordon et al., 1982 and Wright, 1979). In other words, the unequal distribution of income sources, as a result of unequal positions, institutionalizes cleavages with antagonistic interests among workers, thereby reducing the likelihood of working class cohesion and collective action. This, in turn, may affect the role of class and class-related political parties in government policymaking.