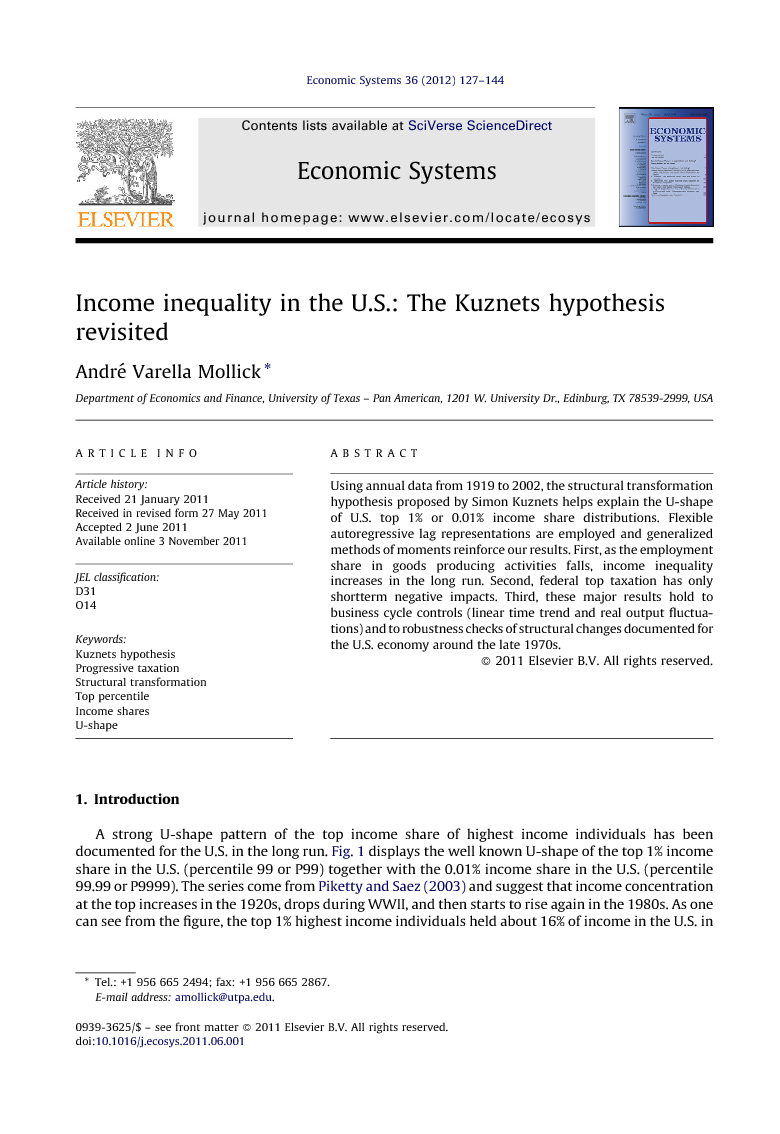 This paper reexamines Kuznets (1955), who linked savings of the wealthier individuals and the structural transformation of developed economies to income inequality. At the time of his writing, Kuznets (1955, p. 1) considered the field of study as “plagued by looseness in definitions, unusual scarcity of data, and pressures of strongly held opinions.” While the latter is still present today, the former have been minimized by the research efforts of Piketty and Saez, 2003 and Piketty and Saez, 2006 and others, who elaborated long-term databases based on tax files. Leigh (2007) finds that there is a strong and significant relationship between top income shares calculated in this way and broader inequality measures, such as the Gini coefficient. Along the lines of two-sector models in Rogerson (2008), our empirical estimates find support for the structural transformation hypothesis for the U.S. from 1919 to 2002. We conjecture that only a long time span allows wage differentials to respond to technology-skill complementarity as in Goldin and Katz (1998). In this paper the goods producing employment share has a negative impact on U.S. income inequality in the long run, while the taxation of top incomes has no long-run impact. These findings are robust to the treatment of business cycles, whether by including the time trend to capture SBTC as in Katz and Murphy (1992) or by allowing for actual economic fluctuations. Previous microeconomic evidence for the U.S. has been provided by Gruber and Saez (2002) for the 1979–1990 period. There are long-run (1920–2000) estimates for Canada by Saez and Veall (2005) and for Sweden (1943–1990) by Roine and Waldenström (2008), who suggest inelastic effects of net-of-tax rates on top income shares. However, none of these studies have considered the dramatic change in employment share at the sector level as we do in this paper. The very long-run approach adopted herein suggests that income inequality is ultimately caused by structural forces of the economy. Kuznets (1955, p. 26) referred to his own paper as “perhaps 5 per cent empirical information and 95 per cent speculation.” We believe the empirical information part is considerably higher in the present study.