عنوان انگلیسی
Does the use of eco-labels affect income distribution and income inequality of aquaculture producers in Taiwan?
دانلود فوری مقاله + سفارش ترجمه 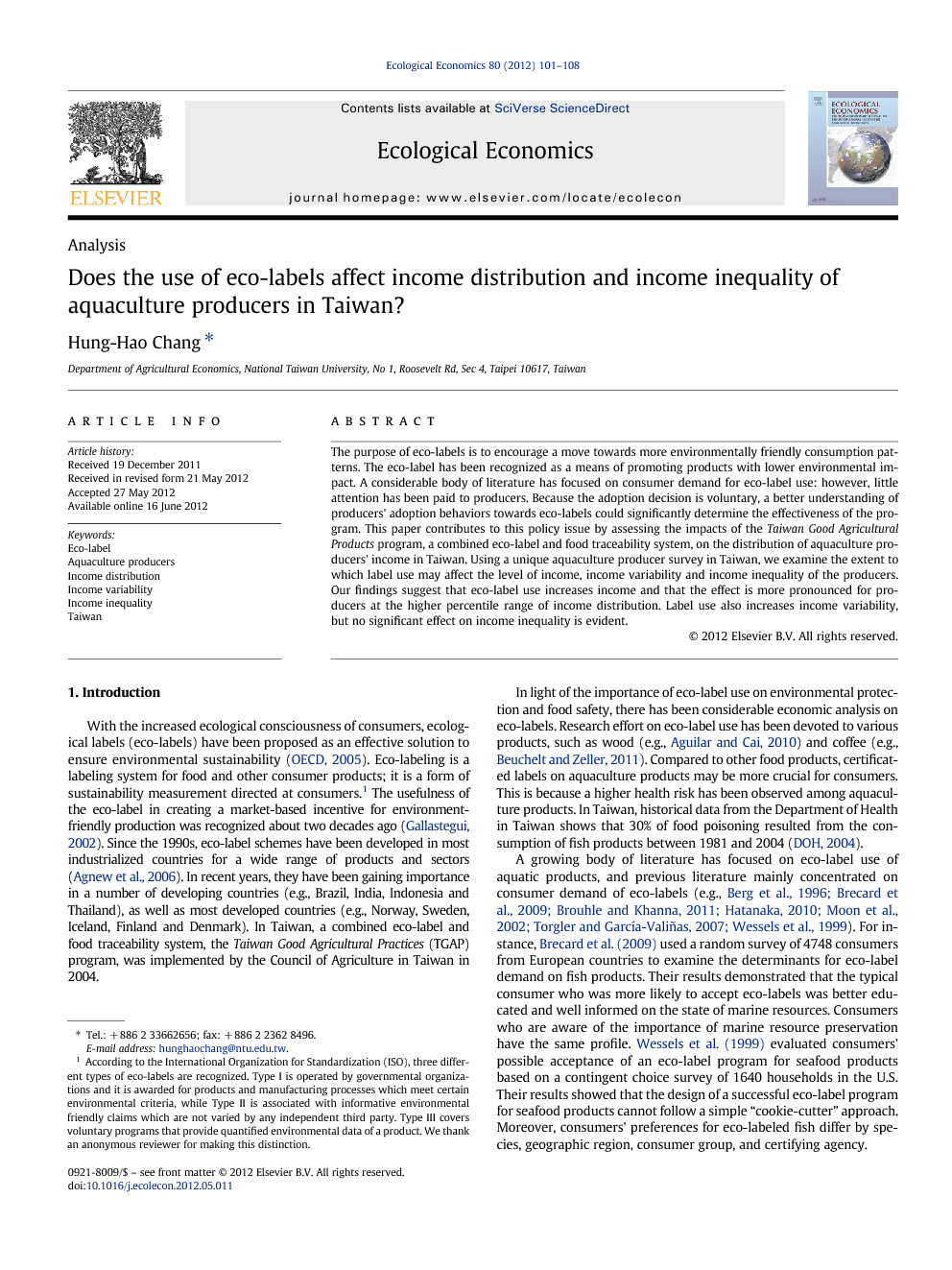 The purpose of eco-labels is to encourage a move towards more environmentally friendly consumption patterns. The eco-label has been recognized as a means of promoting products with lower environmental impact. A considerable body of literature has focused on consumer demand for eco-label use: however, little attention has been paid to producers. Because the adoption decision is voluntary, a better understanding of producers' adoption behaviors towards eco-labels could significantly determine the effectiveness of the program. This paper contributes to this policy issue by assessing the impacts of the Taiwan Good Agricultural Products program, a combined eco-label and food traceability system, on the distribution of aquaculture producers' income in Taiwan. Using a unique aquaculture producer survey in Taiwan, we examine the extent to which label use may affect the level of income, income variability and income inequality of the producers. Our findings suggest that eco-label use increases income and that the effect is more pronounced for producers at the higher percentile range of income distribution. Label use also increases income variability, but no significant effect on income inequality is evident.

With the increased ecological consciousness of consumers, ecological labels (eco-labels) have been proposed as an effective solution to ensure environmental sustainability (OECD, 2005). Eco-labeling is a labeling system for food and other consumer products; it is a form of sustainability measurement directed at consumers.1 The usefulness of the eco-label in creating a market-based incentive for environment-friendly production was recognized about two decades ago (Gallastegui, 2002). Since the 1990s, eco-label schemes have been developed in most industrialized countries for a wide range of products and sectors (Agnew et al., 2006). In recent years, they have been gaining importance in a number of developing countries (e.g., Brazil, India, Indonesia and Thailand), as well as most developed countries (e.g., Norway, Sweden, Iceland, Finland and Denmark). In Taiwan, a combined eco-label and food traceability system, the Taiwan Good Agricultural Practices (TGAP) program, was implemented by the Council of Agriculture in Taiwan in 2004. In light of the importance of eco-label use on environmental protection and food safety, there has been considerable economic analysis on eco-labels. Research effort on eco-label use has been devoted to various products, such as wood (e.g., Aguilar and Cai, 2010) and coffee (e.g., Beuchelt and Zeller, 2011). Compared to other food products, certificated labels on aquaculture products may be more crucial for consumers. This is because a higher health risk has been observed among aquaculture products. In Taiwan, historical data from the Department of Health in Taiwan shows that 30% of food poisoning resulted from the consumption of fish products between 1981 and 2004 (DOH, 2004). A growing body of literature has focused on eco-label use of aquatic products, and previous literature mainly concentrated on consumer demand of eco-labels (e.g., Berg et al., 1996, Brecard et al., 2009, Brouhle and Khanna, 2011, Hatanaka, 2010, Moon et al., 2002, Torgler and García-Valiñas, 2007 and Wessels et al., 1999). For instance, Brecard et al. (2009) used a random survey of 4748 consumers from European countries to examine the determinants for eco-label demand on fish products. Their results demonstrated that the typical consumer who was more likely to accept eco-labels was better educated and well informed on the state of marine resources. Consumers who are aware of the importance of marine resource preservation have the same profile. Wessels et al. (1999) evaluated consumers' possible acceptance of an eco-label program for seafood products based on a contingent choice survey of 1640 households in the U.S. Their results showed that the design of a successful eco-label program for seafood products cannot follow a simple “cookie-cutter” approach. Moreover, consumers' preferences for eco-labeled fish differ by species, geographic region, consumer group, and certifying agency. In addition to the consumer demand, the effectiveness of the environmental friendly programs also depends highly on producers' adoption decisions. Therefore, a better understanding of the adoption behavior of producers and the potential impacts of the adoption decisions on their economic wellbeing is of particular importance. A considerable body of literature has focused on technology adoption of producers toward environmental friendly practices, such as organic farming (e.g., Mayen et al., 2010 and Weber, 2012), and land conservation program (e.g., Chang et al., 2008). For instance, Mayen et al. (2010) compared farm productivity and production efficiency of organic and conventional dairy farms in the U.S. They found little difference in production efficiency between organic and conventional farms. Using a representative sample of coffee growing households in southern Mexico during the growth season 2004–2005, Weber (2012) estimated the price premium and gross income gain from participating in fair-trade-organic markets through grower cooperatives. He found that organic growers received a gross income gain of 5% of total household income or about 26 dollars per household member. Chang et al. (2008) investigated the impacts of participation in the land Conservation Reserve Program in the U.S. on farm household income, consumption, and saving. Using a national representative sample of the farm households in the U.S, they found that participation in the land conservation program increased farm household income and saving. Compared to considerable interest in producer's adoption decision in environmental friendly practices, not much attention has been paid on eco-label uses. Empirical studies on producers' adoption of eco-labels are scarce due to a lack of data availability (Gallastegui, 2002). In the few studies done on this topic, aggregated level data were commonly used. For instance, Monteiro (2010) used a cross-country dataset to look at the spillover effects of eco-label use across countries. By estimating a spatial probit model, which demonstrates how a government's decision to introduce an eco-label can be influenced by the decision of neighboring countries, he found an importance of a high stage of development, innovation experience and potential scale effects in the implementation of an eco-label scheme. In addition, the existence of strategic interdependence in eco-label decisions was evident. Grolleau and Harbi (2008) used an aggregated dataset of 116 countries to investigate the determinants of the adoption of ecolabeling schemes among countries. They found that economic and political freedoms, innovation capacities and experience with other environmental voluntary approaches play a major, sometimes counter-intuitive, role to explain the diffusion of governmental ecolabeling programs. This study contributes to the limited empirical evidence of producers' economic analysis on eco-labels. The primary objective of this paper is two-fold. Using a unique aquaculture producer survey in Taiwan, we begin by examining the extent to which socio-demographic characteristics, family, production conditions and environmental factors are associated with the adoption behaviors of aquaculture producers in Taiwan. Given that income has been recognized as a reliable indicator of economic wellbeing (Deaton, 1997), we also assess the impacts of eco-label use on income.2 In addition to the mean level of income, we further investigate whether or not label use has different effects on aquaculture producers over a range of income levels. Moreover, we demonstrate how eco-label use can affect income variability and income inequality of label users and non-label users differently.

Eco-labels are increasingly appearing on a wide range of goods all over the world. Eco-labels attempt to correct informational asymmetry between producers and consumers about the unobservable environmental attributes of goods. The intent is that consumers will be able to make more informed choices about the negative externalities of their consumption. In light of the importance of eco-label use, enormous research interest has been focused on consumer analysis. Little evidence has been provided on the impact of eco-label use on producers. While consumer interest in such products is a prerequisite for eco-label development, the profitability of eco-label adoption by producers is also a crucial condition for its spreading. Hence, this paper contributes to fill the lack of research on the supply side of seafood eco-labeling. In particular, we assess the impact of TGAP label use on the distribution of income, income variability and income inequality through a unique survey of aquaculture producers in Taiwan. We conducted our empirical analysis in two steps. We first examine the role of the operator's socio-demographic characteristics, family and production conditions on TGAP label use. In what follows, we estimate an income equation using an unconditional quantile regression model to investigate the extent to which label use may affect the levels of income, income variability and income inequality. Several interesting findings are noticeable. First, socioeconomic characteristics of the operator, production characteristics and local economic conditions are significant factors in the adoption decision. In accordance with the findings of technology adoption literature, the probability of label use is positively (negatively) associated with operator's education (age). Moreover, the likelihood of label use also depends on the decisions of the other producers in the local area. A positive peer effect is evident. In terms of the effects of label use on income, our results indicate that TGAP use is associated with higher income. However, the effects are not homogenous; producers of higher income levels benefit more from the use of TGAP labels. Our results also show a positive effect of TGAP labeling on income variability. This finding points out an interesting tradeoff. Eco-label use can increase the level of income, but it can also increase income variability. Finally, no significant effect on income inequality was found by label use. Some policy implications can be inferred from our findings. First, the positive peer effect of producers' label use possibly reflects the importance of information sharing among producers in the local area. Therefore, governments can either directly or indirectly promote an eco-labeling scheme by providing clear, consistent and trusted information to producers. In addition, having more seminars of eco-labels in the local producers' associations may be helpful. This is because the producers can not only access more information by participation in the activities, but also have more chances to exchange information with their peers. From a social network point of view, peer effects are associated with the influences of social norms at the neighborhood level among farmers. Therefore, the positive peer effects on eco-label adoption may imply a policy option that government can use the social norms to leverage participation of the eco-label use. The second policy implication is related to the tradeoff between increased income level and income variability. To reduce the variability of income, governments can implement supplementary programs, such as a price stability program to help reduce producers' variability in income.