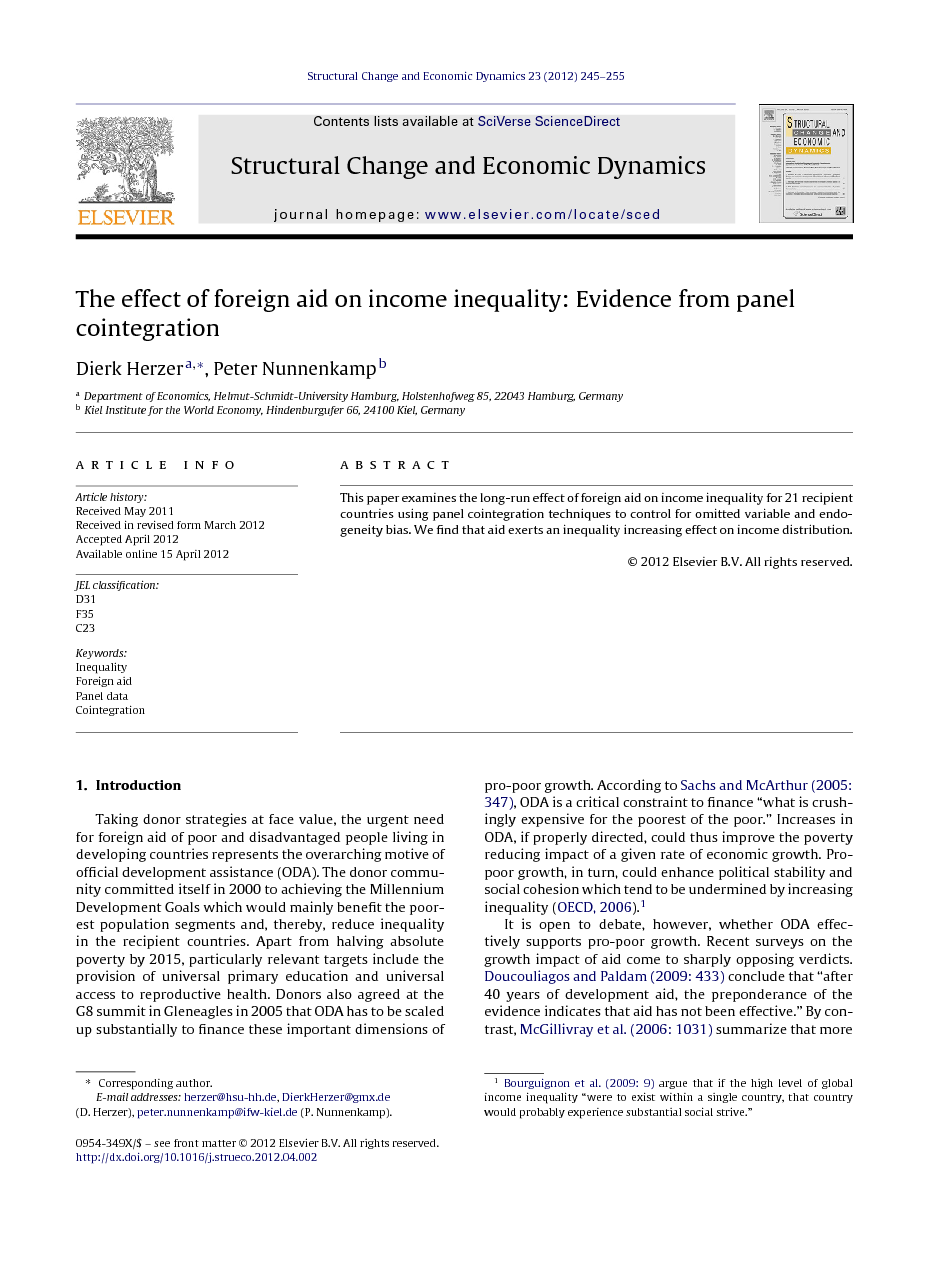 This paper examines the long-run effect of foreign aid on income inequality for 21 recipient countries using panel cointegration techniques to control for omitted variable and endogeneity bias. We find that aid exerts an inequality increasing effect on income distribution.

Taking donor strategies at face value, the urgent need for foreign aid of poor and disadvantaged people living in developing countries represents the overarching motive of official development assistance (ODA). The donor community committed itself in 2000 to achieving the Millennium Development Goals which would mainly benefit the poorest population segments and, thereby, reduce inequality in the recipient countries. Apart from halving absolute poverty by 2015, particularly relevant targets include the provision of universal primary education and universal access to reproductive health. Donors also agreed at the G8 summit in Gleneagles in 2005 that ODA has to be scaled up substantially to finance these important dimensions of pro-poor growth. According to Sachs and McArthur (2005: 347), ODA is a critical constraint to finance “what is crushingly expensive for the poorest of the poor.” Increases in ODA, if properly directed, could thus improve the poverty reducing impact of a given rate of economic growth. Pro-poor growth, in turn, could enhance political stability and social cohesion which tend to be undermined by increasing inequality (OECD, 2006).1 It is open to debate, however, whether ODA effectively supports pro-poor growth. Recent surveys on the growth impact of aid come to sharply opposing verdicts. Doucouliagos and Paldam (2009: 433) conclude that “after 40 years of development aid, the preponderance of the evidence indicates that aid has not been effective.” By contrast, McGillivray et al. (2006: 1031) summarize that more recent research “agrees with its general finding that aid works to the extent that in its absence, growth would be lower.” Yet, even this positive assessment does not resolve the question of whether it is primarily the poor whose income prospects improve through ODA.2 Anecdotal evidence rather suggests that mainly the political elite benefits from aid. It is estimated that the former president of Zaire, Mobutu Sese Seko, looted the treasury of at least $5 billion (an amount equal to the country's entire external debt at the time he was ousted in 1997). The funds allegedly embezzled by the former presidents of Indonesia and the Philippines, Mohamed Suharto and Ferdinand Marcos, are still higher (Svensson, 2005). In contrast to the fairly large literature on growth effects, the distributional effects of ODA have received scant attention in previous empirical research. It is important to fill this gap in order to improve the allocation of aid and its effectiveness. Theoretical considerations show that aid may induce self-interested recipients to engage in rent-seeking activities aimed at appropriating resource windfalls (Svensson, 2000, Hodler, 2007 and Economides et al., 2008). Moreover, donors may allocate aid in a way that deviates from the pro-poor growth rhetoric. As discussed in more detail in Section 2, several channels exist through which aid may result in more pronounced income inequality. The few existing empirical findings are mixed. Chong et al. (2009), using cross-section and system GMM panel techniques, find that aid has no robust effect on inequality. The random effects panel analysis by Bjørnskov (2010) reveals that the interaction of foreign aid and democracy in the recipient country is robustly and positively associated with income inequality. Shafiullah (2011) estimates fixed and random effects models and concludes that aid reduces income inequality.3 Against the backdrop of scarce and ambiguous findings, we re-assess the question of the distributional effects of foreign aid. Specifically, we contribute to the empirical literature by employing panel cointegration techniques to examine the long-run effect of aid on income inequality. Panel cointegration estimators are most appropriate in the present context. We argue in Section 3 that they are robust under cointegration to a variety of estimation problems that often plague empirical work, including omitted variables, slope heterogeneity, and endogenous regressors. To anticipate the results, we find that aid exerts an inequality increasing effect on the distribution of income. The remainder of this paper is composed of four sections. In Section 2, we discuss the related literature. Section 3 sets out the basic empirical model and describes the empirical methodology. The data and the estimation results are presented in Section 4, and Section 5 concludes.

In this paper, we examined the nature of the effect of foreign aid on income inequality using panel cointegration techniques. Employing data for 21 countries over the period 1970–1995, we found that aid exerts an inequality increasing effect on income distribution—an effect that is robust to different estimation methods, potential structural breaks, different inequality data sets, and possible outliers. This finding adds an important dimension to the aid effectiveness literature by complementing the long-lasting and still controversial debate on the growth impact of aid. In particular, our results contradict the optimistic view that aid might be effective in alleviating poverty in recipient countries even if it had no discernible average growth effects. It has to be stressed that our analysis captured overall effects that cannot be attributed to any particular transmission mechanism. This has important implications. Previous literature focuses almost exclusively on inequality increasing effects through rent seeking by local elites in the recipient countries and the diversion of foreign aid for personal benefit. This invites calls for donors to strengthen the conditionality of aid (e.g., Boone, 1996), to focus on countries with institutions that restrict rent seeking (e.g., Hodler, 2007), to prevent leakage by better monitoring the flow of aid resources within recipient countries (e.g., Bjørnskov, 2010), and to initiate and support “country-level processes that are formal, transparent and take account of the interests of the poor” (OECD, 2006: 12). While these recommendations may help prevent inequality increasing effects of aid, they are not sufficient once other transmission channels are taken into account. Better accountability is required on both sides, recipients as well as donors. Donors do not necessarily allocate aid in line with their rhetoric on pro-poor growth, by targeting the most needy and deserving. The temptation of aid agencies to put all the blame on rent seeking in recipient countries tends to ignore that their own incentive problems may prevent aid from reducing inequality. Public outrage in the North about corruption in the South abstracts from the selfish aid motives that may lead donors to favor rich local elites. Overcoming selfish behavior and agency problems on the part of donors is unlikely to be easier than overcoming rent seeking and leakage on the part of recipients. Isolating the impact of specific transmission mechanisms clearly warrants further research. This could help clarify the responsibility of donors and recipient countries for the distributional effects of foreign aid. Apart from more direct tests of specific transmission mechanisms, another approach may lend itself more easily to the panel cointegration methods employed in this paper. For example, deeper insights may be gained by differentiating aid from different types of donors, using classifications of particularly selfish and more altruistic donors available from the aid allocation literature (e.g., Berthélemy, 2006). In a similar vein, it could be analyzed whether the distributional effects vary between major forms of aid such as project-specific and general budget support.