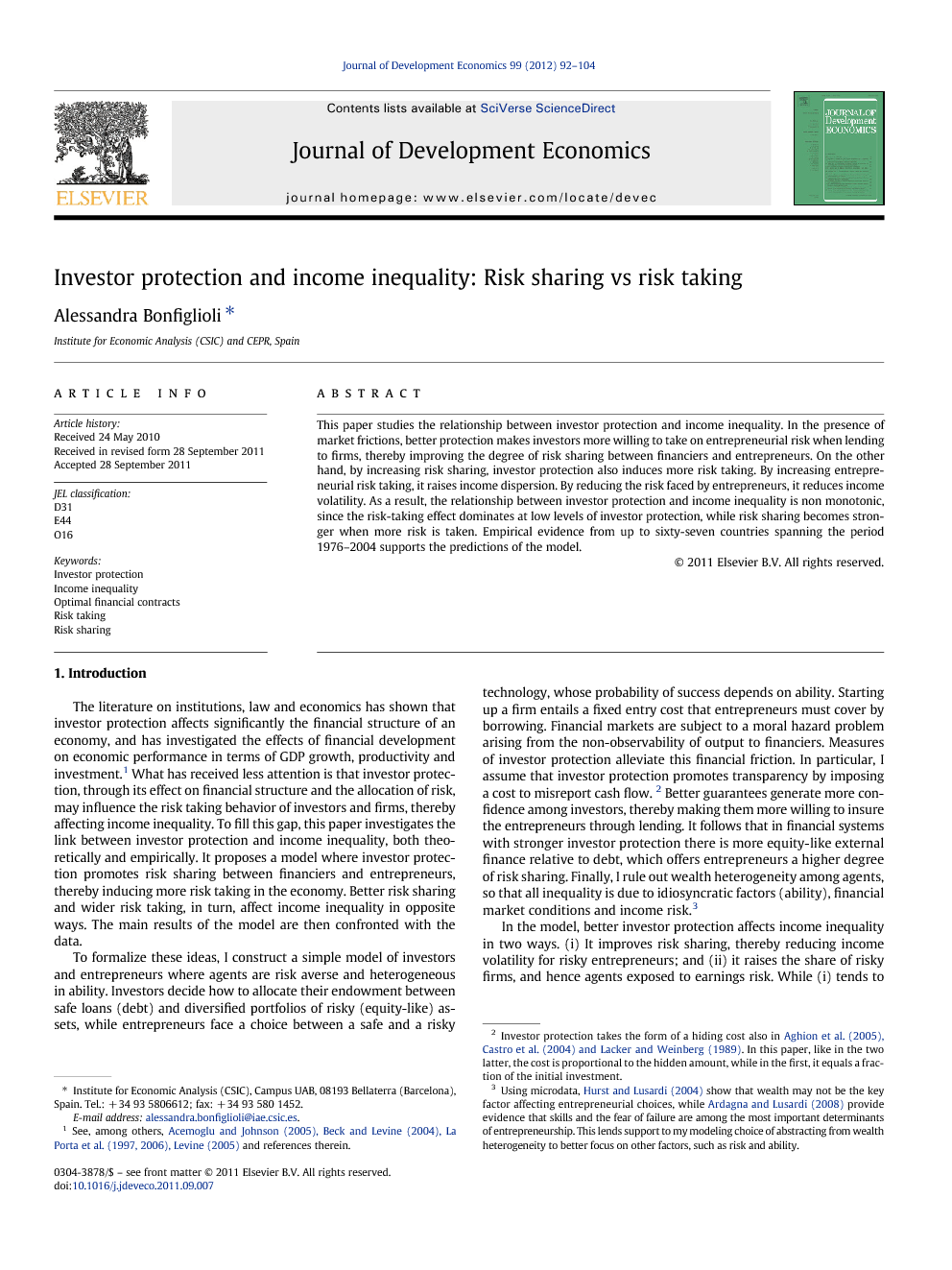 This paper provides theoretical and empirical support for a systematic relationship between investor protection, financial structure and income inequality. While there are contributions addressing the effects of investor protection on financial structure and economic growth through risk sharing and risk taking, little attention has been paid to the implications for income distribution. To fill this gap, I develop a simple static model with risk-averse agents, heterogeneous in their ability, that can produce using either a safe or a risky technology. I assume that entrepreneurs have to borrow funds in order to start their business, and that there are financial frictions, arising from the non-observability of a firm's cash-flow to investors. In this framework, I study how investor protection, by alleviating frictions, affects optimal financial contracts, the technological choice of agents with different ability and the distribution of their earnings. Better investor protection affects income inequality in two opposite ways. By improving risk sharing between entrepreneurs and financiers, it reduces income volatility. On the other hand, by inducing more agents to choose the risky technology, it may increase the dispersion of the earnings realizations. The first, “risk sharing”, effect reduces inequality, while “risk taking” tends to raise it. The overall impact of investor protection on inequality is shown to be non-monotonic. In particular, the “risk taking” effect dominates at low levels of investor protection, and is outweighed by “risk sharing” when investor protection is high. In the empirical section, I provide evidence from a cross-section of up to sixty seven countries and a panel of up to fifty-eight countries over the period 1976–2004 that is consistent with the main theoretical predictions. The model is deliberately kept simple to emphasize the mechanism linking investor protection to income inequality. It follows that its implications for economic performance and welfare may appear simplistic: aggregate income increases with investor protection due to risk taking, and welfare increases due to higher output and better risk sharing. Yet, an interesting insight is that investor protection, through its positive effect on aggregate output and the non-monotonic impact on inequality, generates a Kuznets' curve. Contrary to existing models, this inverse-U shaped relationship between GDP and inequality is generated by the development of financial institutions, rather than by wealth accumulation. Moreover, as discussed in paper, the model may be easily modified to address a number of issues, such as the political economy of financial institutions.