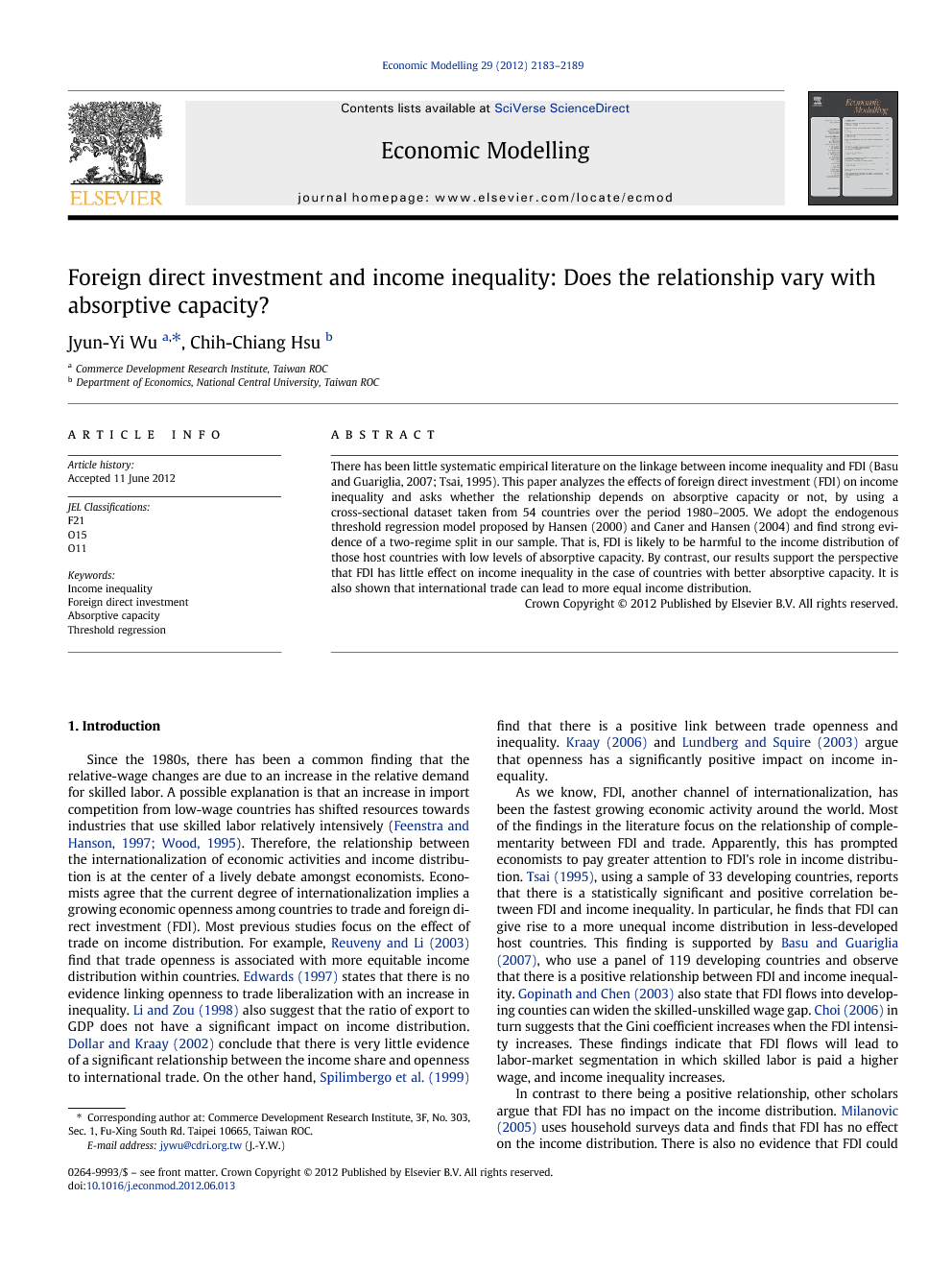 There has been little systematic empirical literature on the linkage between income inequality and FDI (Basu and Guariglia, 2007; Tsai, 1995). This paper analyzes the effects of foreign direct investment (FDI) on income inequality and asks whether the relationship depends on absorptive capacity or not, by using a cross-sectional dataset taken from 54 countries over the period 1980–2005. We adopt the endogenous threshold regression model proposed by Hansen (2000) and Caner and Hansen (2004) and find strong evidence of a two-regime split in our sample. That is, FDI is likely to be harmful to the income distribution of those host countries with low levels of absorptive capacity. By contrast, our results support the perspective that FDI has little effect on income inequality in the case of countries with better absorptive capacity. It is also shown that international trade can lead to more equal income distribution.

Since the 1980s, there has been a common finding that the relative-wage changes are due to an increase in the relative demand for skilled labor. A possible explanation is that an increase in import competition from low-wage countries has shifted resources towards industries that use skilled labor relatively intensively (Feenstra and Hanson, 1997 and Wood, 1995). Therefore, the relationship between the internationalization of economic activities and income distribution is at the center of a lively debate amongst economists. Economists agree that the current degree of internationalization implies a growing economic openness among countries to trade and foreign direct investment (FDI). Most previous studies focus on the effect of trade on income distribution. For example, Reuveny and Li (2003) find that trade openness is associated with more equitable income distribution within countries. Edwards (1997) states that there is no evidence linking openness to trade liberalization with an increase in inequality. Li and Zou (1998) also suggest that the ratio of export to GDP does not have a significant impact on income distribution. Dollar and Kraay (2002) conclude that there is very little evidence of a significant relationship between the income share and openness to international trade. On the other hand, Spilimbergo et al. (1999) find that there is a positive link between trade openness and inequality. Kraay (2006) and Lundberg and Squire (2003) argue that openness has a significantly positive impact on income in-equality. As we know, FDI, another channel of internationalization, has been the fastest growing economic activity around the world. Most of the findings in the literature focus on the relationship of complementarity between FDI and trade. Apparently, this has prompted economists to pay greater attention to FDI's role in income distribution. Tsai (1995), using a sample of 33 developing countries, reports that there is a statistically significant and positive correlation between FDI and income inequality. In particular, he finds that FDI can give rise to a more unequal income distribution in less-developed host countries. This finding is supported by Basu and Guariglia (2007), who use a panel of 119 developing countries and observe that there is a positive relationship between FDI and income inequality. Gopinath and Chen (2003) also state that FDI flows into developing counties can widen the skilled-unskilled wage gap. Choi (2006) in turn suggests that the Gini coefficient increases when the FDI intensity increases. These findings indicate that FDI flows will lead to labor-market segmentation in which skilled labor is paid a higher wage, and income inequality increases. In contrast to there being a positive relationship, other scholars argue that FDI has no impact on the income distribution. Milanovic (2005) uses household surveys data and finds that FDI has no effect on the income distribution. There is also no evidence that FDI could lead to more income inequality in developing countries according to Sylwester (2005) who applied the 3SLS estimation. The main contribution of this paper is that we investigate the nonlinear effect of the linkage between FDI and income inequality. Fig. 1 illustrates the scatter plot that compares the Gini coefficient with FDI, using cross-sectional data for 54 countries from 1980 to 2005. The lack of an identifiable trend suggests that FDI may not have an impact on income inequality. In other words, this finding lends strong support to our intuition that income inequality and FDI do not take the form of a linear relationship. In contrast to previous studies, for example, Choi (2006) and Tsai (1995) that compare the distribution effects of FDI between developed and developing countries, we use absorptive capacities to distinguish between different groups of countries since absorptive capacities might be an important determinant of FDI. This is because absorptive capacity is defined as a host country's ability to absorb and adopt new incoming technology from a foreign country. Sufficient absorptive capacity can help to attract FDI as it improves the investment climate and promotes the efficiency of FDI. Absorptive capacity can be found in several studies that explicitly examine such conditional factors, including human capital development (Borensztein et al., 1998 and Olofsdotter, 1998), trade policy (Balasubramanyam et al., 1996 and Olofsdotter, 1998), the level of total factor productivity (Girma, 2005), the development of financial markets (Alfaro et al., 2004), and the provision of infrastructure (Kinoshita and Lu, 2006). Other researches explores the hypothesis that FDI induced externalities depend on absorptive capacity, e.g., de Mello (1997), Durham (2004), Görg and Greenaway (2004), and Kokko (1994), among others. Hence, we employ the endogenous threshold regression suggested by Caner and Hansen (2004) and Hansen (2000) to test whether the provision of infrastructure is an important factor in the nonlinear relationship between FDI and income inequality. The empirical investigation of this paper yields several results. Firstly, based on the threshold regressions, our results show that there indeed exists a nonlinear effect. FDI makes the income distribution more unequal for countries with a smaller degree of infrastructure, whereas on the other hand FDI has little effect on the income distribution of better-off countries. This finding indicates that effective infrastructure policies can attract foreign investors and make the income distribution more equal. Secondly, we find that international openness could lead to a more even income distribution for those countries with better levels of absorptive capacity. This result is consistent with the modernization argument proposed by Tsai (1995). The remainder of this study is organized as follows. In Section 2 the threshold regressions of Caner and Hansen (2004) and Hansen (2000) are explained, and the data employed in this paper are introduced. Section 3 reports the empirical findings. Section 4 provides the main conclusions.

To date, there have been few systematic empirical studies on the linkage between income inequality and FDI. This paper attempts to examine this issue by testing the linear and nonlinear relationships. We use cross-country data for the period 1980–2005 and our sample includes 35 developing countries and 21 developed countries. For the linear relationship, the OLS results show that an increase in FDI leads to a more unequal income distribution, and this finding is consistent with the results of Basu and Guariglia (2007) and Tsai (1995). The main contribution of this paper is that we employ the endogenous threshold regression and the instrumental variable threshold regression developed by Caner and Hansen (2004) and Hansen (2000). In this regard, we use absorptive capacity as the threshold variable because it is an important factor for enhancing the efficiency of FDI. In this paper, we adopt four indexes of infrastructure: air transport, electric power consumption, telephone main lines and their composite infrastructure index (PCM), as well as initial GDP to serve as a proxy for absorptive capacity. Our findings suggest that FDI has a nonlinear effect for countries with different levels of infrastructure. FDI appears to be associated with more inequality in countries that have less absorptive capacity, whereas in the case of countries with better absorptive capacity, FDI has only a small effect on the income distribution. Public policies which set up good quality infrastructures aimed at tackling these circumstances could be of use. For instance, sufficient infrastructure could help the poor to improve the investment conditions. In the long run, such policies could allow the poor to catch up with the rich. The reason for this relationship is that foreign companies are attracted by those countries with well-developed absorptive capacity. It also raises the demand for skilled workers and thereby results in greater income differentials. Our research also elicits another interesting result which is that openness will improve efficiency in resource allocation.