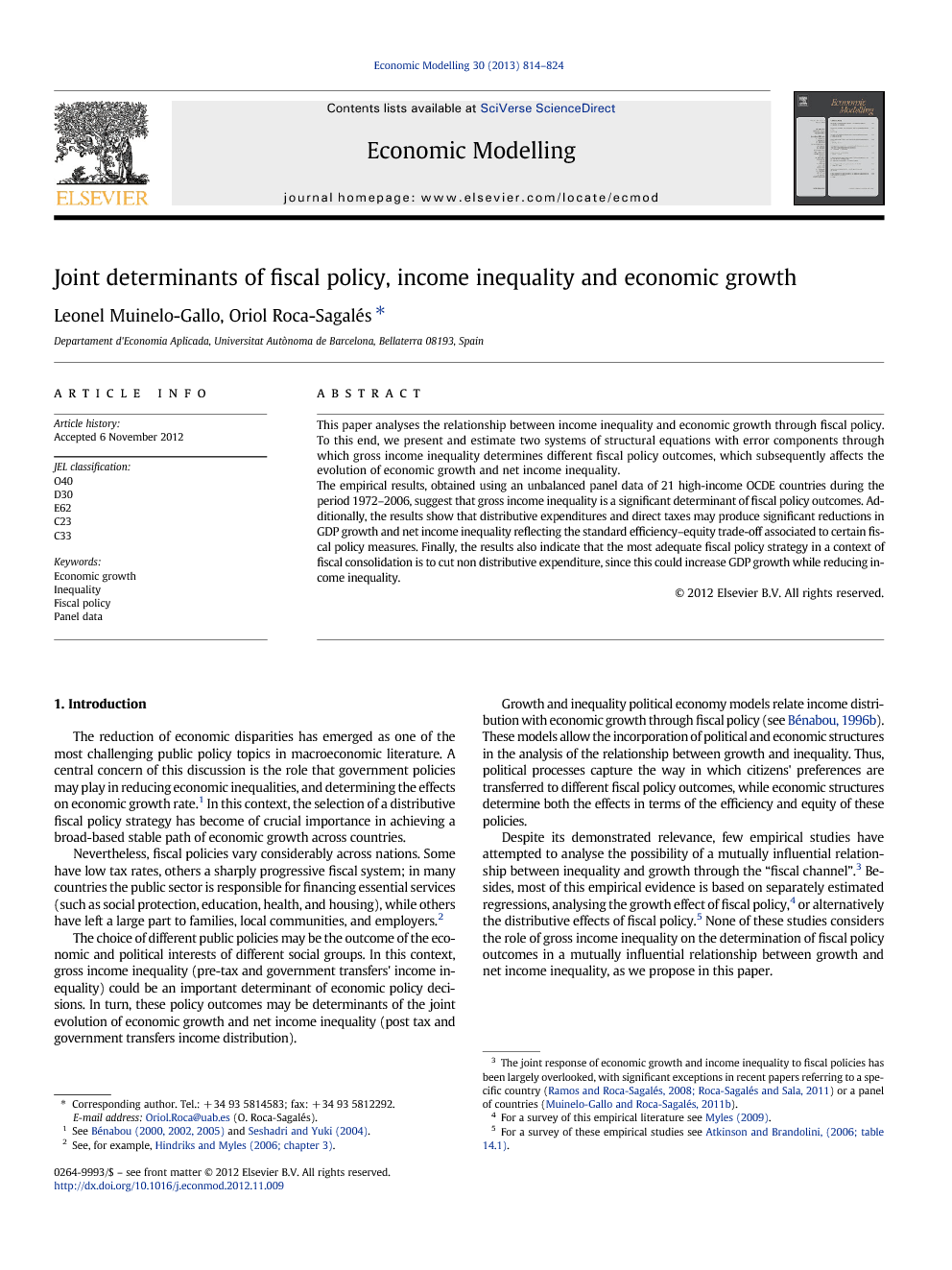 The reduction of economic disparities has emerged as one of the most challenging public policy topics in macroeconomic literature. A central concern of this discussion is the role that government policies may play in reducing economic inequalities, and determining the effects on economic growth rate.1 In this context, the selection of a distributive fiscal policy strategy has become of crucial importance in achieving a broad-based stable path of economic growth across countries. Nevertheless, fiscal policies vary considerably across nations. Some have low tax rates, others a sharply progressive fiscal system; in many countries the public sector is responsible for financing essential services (such as social protection, education, health, and housing), while others have left a large part to families, local communities, and employers.2 The choice of different public policies may be the outcome of the economic and political interests of different social groups. In this context, gross income inequality (pre-tax and government transfers' income inequality) could be an important determinant of economic policy decisions. In turn, these policy outcomes may be determinants of the joint evolution of economic growth and net income inequality (post tax and government transfers income distribution). Growth and inequality political economy models relate income distribution with economic growth through fiscal policy (see Bénabou, 1996b). These models allow the incorporation of political and economic structures in the analysis of the relationship between growth and inequality. Thus, political processes capture the way in which citizens' preferences are transferred to different fiscal policy outcomes, while economic structures determine both the effects in terms of the efficiency and equity of these policies. Despite its demonstrated relevance, few empirical studies have attempted to analyse the possibility of a mutually influential relationship between inequality and growth through the “fiscal channel”.3 Besides, most of this empirical evidence is based on separately estimated regressions, analysing the growth effect of fiscal policy,4 or alternatively the distributive effects of fiscal policy.5 None of these studies considers the role of gross income inequality on the determination of fiscal policy outcomes in a mutually influential relationship between growth and net income inequality, as we propose in this paper. Based on the approach by Bénabou (2000), the aim of this research is to develop and estimate a complete empirical model of joint determinants of fiscal policy, inequality, and economic growth. The study first analyses the importance of gross income inequality and other institutional, demographic and economic explanatory factors on the election of different fiscal policy outcomes. And secondly, it evaluates how effective these policies are in reducing net income inequality and also their effects in terms of macroeconomic efficiency. For this purpose, a complete system of three equations has been constructed for an unbalanced panel of 21 high income-countries for the period 1972–2006. This paper's contribution is thus twofold. First, it analyses the importance of different institutional, demographic and economic factors in determining the fiscal policy options of an extended panel of high-income countries. Second, it allows us to identify the potential effects and policy implications of different fiscal policy strategies in a mutually influential relationship between economic growth and net income inequality. The paper is organised as follows. Section 2 provides a theoretical framework, where different hypotheses concerning the determinants of fiscal policy and their impact on economic growth and net income inequality are discussed. Section 3 discusses the model, while Section 4 describes the database and details the empirical methodology. In Section 5, the empirical results are presented. Finally, Section 6 contains some concluding remarks.