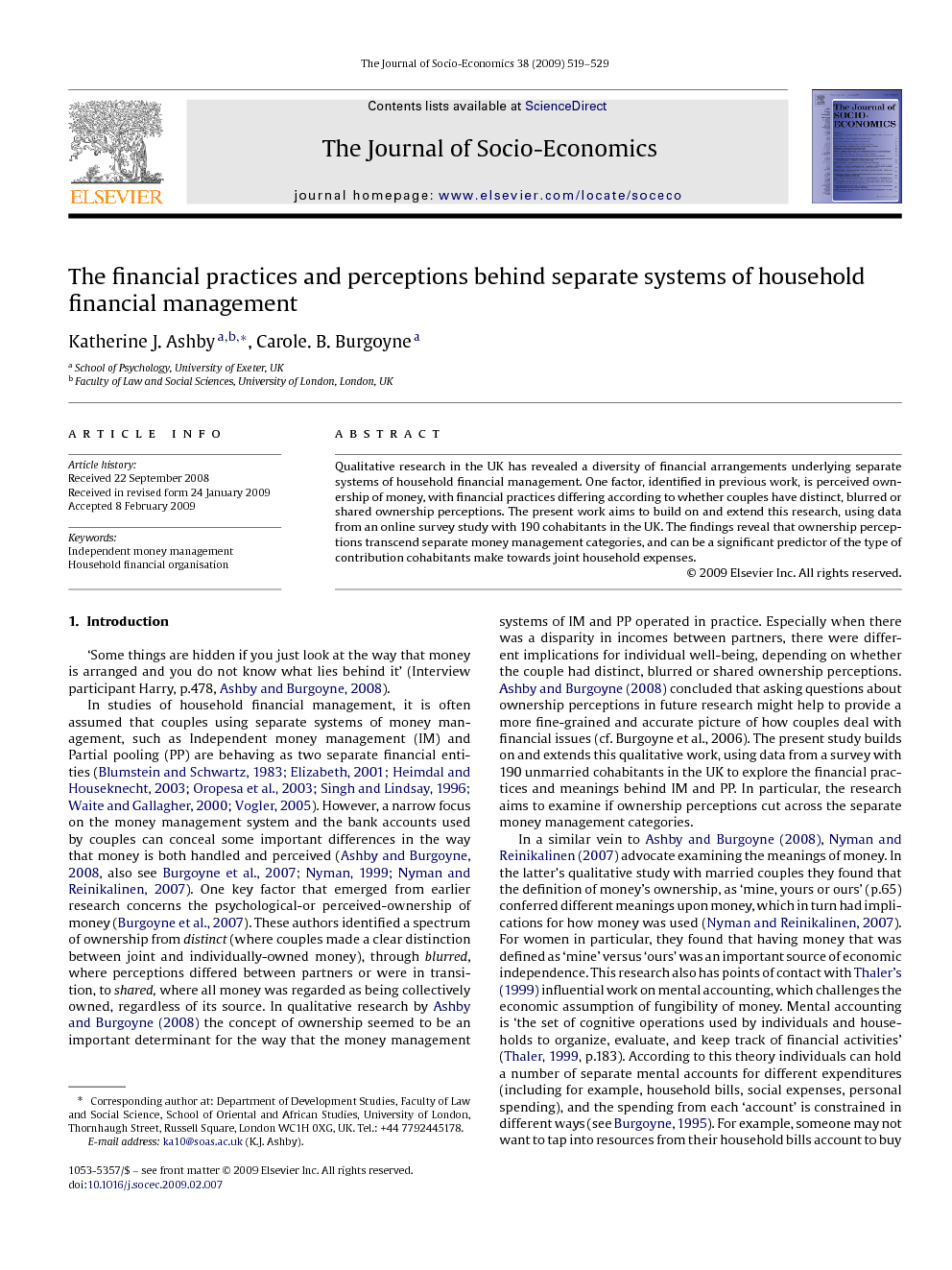 Qualitative research in the UK has revealed a diversity of financial arrangements underlying separate systems of household financial management. One factor, identified in previous work, is perceived ownership of money, with financial practices differing according to whether couples have distinct, blurred or shared ownership perceptions. The present work aims to build on and extend this research, using data from an online survey study with 190 cohabitants in the UK. The findings reveal that ownership perceptions transcend separate money management categories, and can be a significant predictor of the type of contribution cohabitants make towards joint household expenses.

This study had a number of limitations which merit discussion. First, the hypotheses indicate that perceiving the ownership of money as shared, blurred or distinct, could lead to different financial practices. Whilst this is a plausible prediction based on the findings from qualitative studies, since the present data were correlational in nature they cannot be used to support causal interpretations. For example, it is also possible that ownership perceptions are influenced by the financial practices couples adopt. In future work, experimental research designs are needed to test for causal relationships. Additionally, further research is required to investigate the origins of different ownership perceptions, including the extent to which partners believe money should be shared or kept independently in cohabiting relationships (see Burgoyne et al., 2006). A second limitation relates to the cohabitants who took part in this study. A majority of the sample were in dual earner couples without children. The latter was advantageous in allowing an in-depth understanding of this group of cohabitants to be explored, because previous research in the UK has focused on couples with children. However, this does mean that further research is required to examine whether the present findings can generalise to cohabitants with children, who are also likely to be in dual-earner relationships. It is important to examine how the employment status of each partner impacts on his or her perceptions and use of money. Furthermore, as the majority of the sample in the survey was female, the extent to which the present findings can be generalised to male cohabitants will need to be investigated in future research. Finally, including data from both partners in a couple would allow a more thorough examination of potential gender differences in ownership perceptions. Nonetheless, despite these limitations, the present study provided detailed information on the financial arrangements of a larger group of cohabitants than has been possible in earlier qualitative studies. It also gave an opportunity to test some of the previous (qualitative) findings in a much larger sample. In terms of theoretical implications the findings of the present and earlier studies indicate the need to move beyond Pahl, 1989 and Pahl, 1995 typology in its current form to explore the potential diversity of meanings and practices of financial management within the categories of IM and PP. It is clear from the present findings that when IM and PP participants respond to the category labels, some do so on the basis of their bank accounts, and some on the basis of their perceptions of ownership, i.e. how they think about the money in various accounts (see Ashby and Burgoyne, 2008). Collecting data on ownership perceptions, as well as the extent to which couples adhere to a strict 50/50 split of household and leisure expenses, may provide a more accurate picture of cohabitants’ financial practices and individual access to resources. Such an approach would also help to resolve any ambiguities regarding the extent to which participants (and researchers in qualitative research) relied on subjective or objective information when classifying a couple's system of money management.