عنوان انگلیسی
What do boards really do? Evidence from minutes of board meetings
دانلود فوری مقاله + سفارش ترجمه 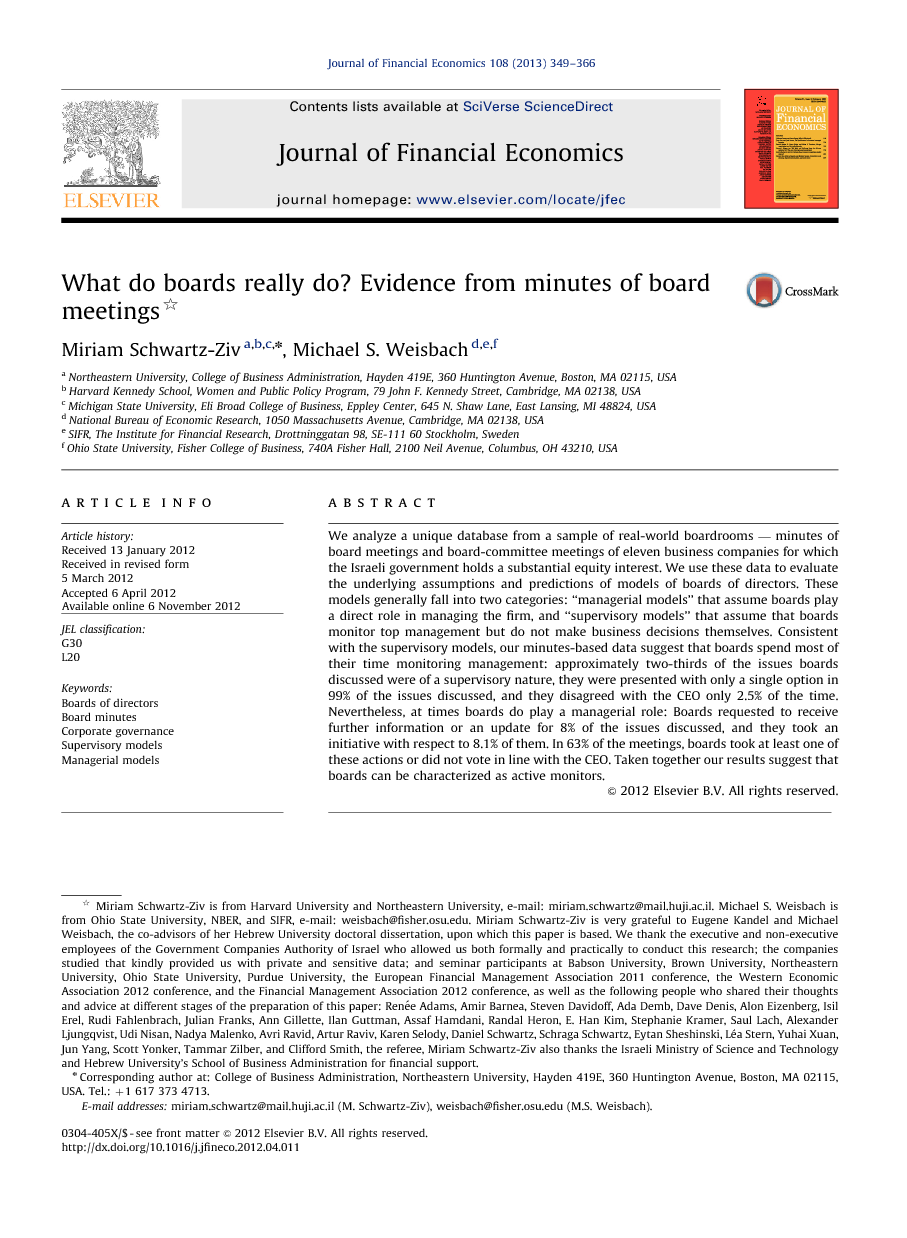 We analyze a unique database from a sample of real-world boardrooms — minutes of board meetings and board-committee meetings of eleven business companies for which the Israeli government holds a substantial equity interest. We use these data to evaluate the underlying assumptions and predictions of models of boards of directors. These models generally fall into two categories: “managerial models” that assume boards play a direct role in managing the firm, and “supervisory models” that assume that boards monitor top management but do not make business decisions themselves. Consistent with the supervisory models, our minutes-based data suggest that boards spend most of their time monitoring management: approximately two-thirds of the issues boards discussed were of a supervisory nature, they were presented with only a single option in 99% of the issues discussed, and they disagreed with the CEO only 2.5% of the time. Nevertheless, at times boards do play a managerial role: Boards requested to receive further information or an update for 8% of the issues discussed, and they took an initiative with respect to 8.1% of them. In 63% of the meetings, boards took at least one of these actions or did not vote in line with the CEO. Taken together our results suggest that boards can be characterized as active monitors.

Boards of directors play a central role in corporate governance. Yet, the way in which they make decisions is a mystery. Their discussions are conducted behind closed doors, and records of who said what, or even the general tenor of the meeting, are generally not publicly available. Empirical studies of governance generally draw inferences about the roles of the board from publicly available data, and knowing whether these inferences are correct is often difficult. Because of the uncertainty about how boards function in practice, scholars have used wildly different assumptions when constructing formal models of boards of directors. Our knowledge of boards of directors is substantially limited by the private way in which they usually operate. In this paper, we construct a database consisting of the actual board minutes of a sample of 11 Israeli, government-controlled companies for one year per company. These minutes contain details of who said what at board meetings and board-committee meetings, the actions taken by the directors, and whether dissent among directors and disagreement between the directors and the CEO occurred. Our analysis characterizes the interaction among directors and between them and the CEO, and it illustrates the way in which directors make decisions. Our goal is to evaluate the extent to which models of boards of directors correspond to real-world practice. The results suggest that most of the time boards play a supervisory role. In our sample, boards usually discussed issues we classify as supervisory, were more likely to receive updates than make decisions, were not presented with alternatives, and almost always voted in line with the CEO. However, we also find evidence suggesting that some of the time they play a managerial role as well. In 63% of the meetings, boards took some kind of action; on firm level, they actively requested further information on 8% of the issues discussed; and they took initiatives on their own in 8.1% of the issues. Taken together, our findings suggest that boards can be characterized as active monitors. Boards are active, but their main focus tends to be on supervising management rather than dictating the specifics of how the company should be run. This picture of boards, taken from the minutes of their meetings, complements much previous research. Theoretical work has helped to explain how self-interested directors can play an important role in their firms, while empirical work has documented much about the way that they do so. Our findings suggest that incorporating both supervisory and managerial roles simultaneously into future discussions of board behavior is a potentially fruitful research direction. Theoretically, models in which boards can both supervise managers and sometimes take over managerial tasks themselves are likely to be more realistic than those currently in the literature. And empirically, documenting the relative importance of managerial and supervisory roles, as well as the circumstances under which the board fills each one, would be extremely valuable. We emphasize that there are important limitations of this study. The sample consists of only 11 companies, from one small country, for only one year per company. Equally important, most of these companies are government-controlled, not privately held. Consequently, directors are appointed instead of elected, and their pecuniary incentives are typically smaller than in privately held companies. It is possible that these factors lead the interactions we observe in our sample of companies to be different from those in companies that are more representative of the population of worldwide corporations. In particular, we would expect that the existence of monetary incentives as directors receive in most privately held companies are likely to lead boards to be more active than we observe in our sample. The extent to which the sample of Israeli, government-controlled companies’ boards is reflective of boards of non-Israeli, non-government-controlled companies is unclear. Future research should attempt to perform similar analyses for other samples of companies, to determine the extent to which boardroom dynamics differ across different types of companies, or follow a more or less universal pattern. These potential differences between our sample firms and other firms notwithstanding, we believe this analysis constitutes an important step in understanding boards of directors. A key limitation to prior research on corporate governance is that in most cases it is impossible to observe exactly what goes on in boardrooms. Minutes data provide a window into how boards actually operate, and as such, highlight and quantify characteristics that allow a relatively thorough understanding of the nature of the work of boards of directors