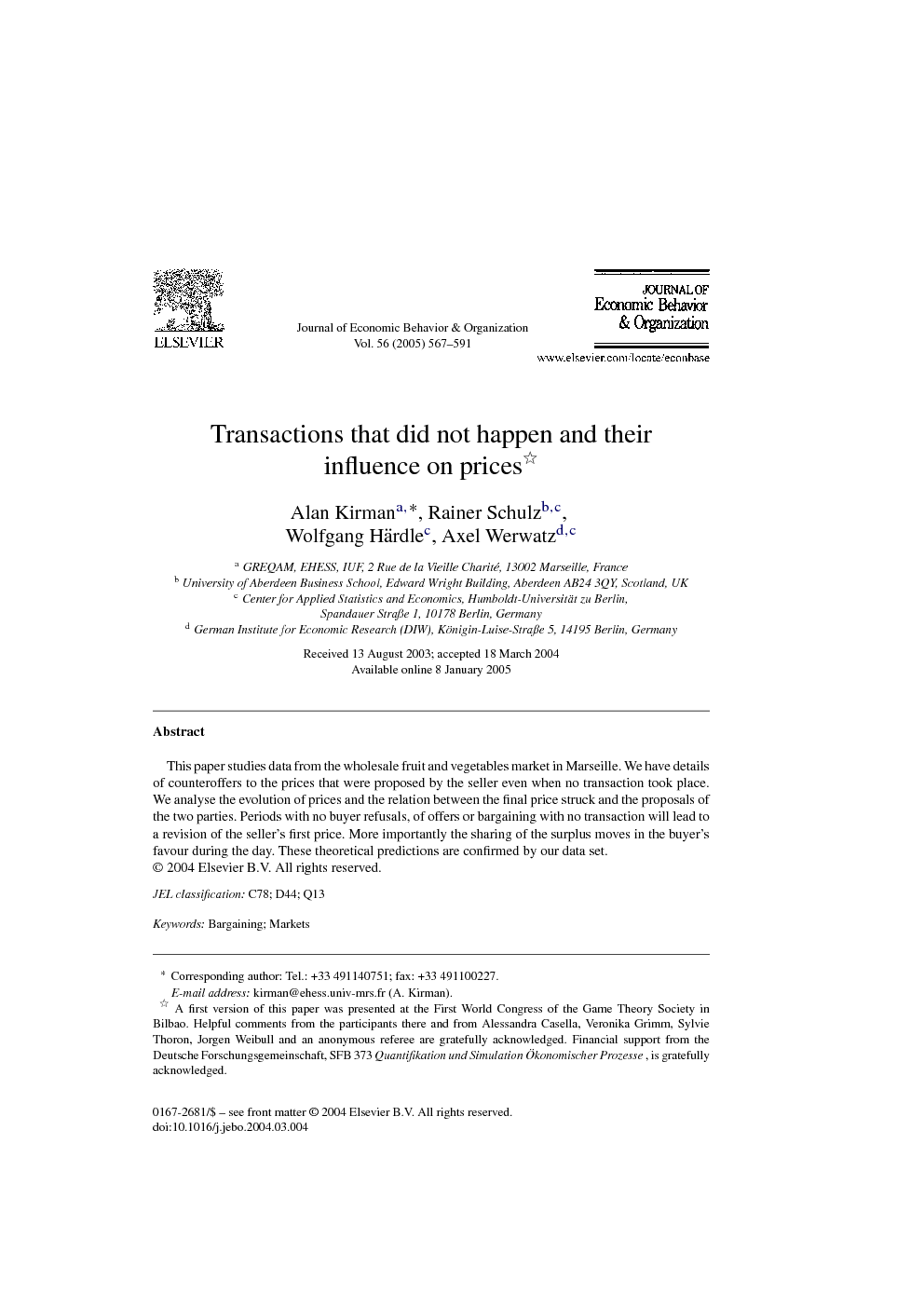 This paper studies data from the wholesale fruit and vegetables market in Marseille. We have details of counteroffers to the prices that were proposed by the seller even when no transaction took place. We analyse the evolution of prices and the relation between the final price struck and the proposals of the two parties. Periods with no buyer refusals, of offers or bargaining with no transaction will lead to a revision of the seller’s first price. More importantly the sharing of the surplus moves in the buyer’s favour during the day. These theoretical predictions are confirmed by our data set

Bargaining literature presents several problems when one confronts it with empirical facts. In many markets, unlike the situation in the Rubinstein (1982) framework, haggling does, in fact, take place. It is almost never the case that we have details of the intermediate offers and counteroffers that make up such haggling, and this is particularly true of those cases in which bargaining took place but no bargain was struck. Data on final transactions does not reveal the process that arrived at the final bargain. This would be of no importance if the offers and counteroffers that are made during the bargaining process had no influence on the final outcome. However, if we regard them as revealing information, then they would seem potentially influential. In this paper we present evidence from the wholesale fruit and vegetable market in Marseille, and we analyse the data for four products. This data contains details of the prices asked and the counteroffers made, even when no transaction took place. This situation is difficult to fit into the existing literature. What happens in reality is that both buyer and seller get information about “the state of the market” as the day goes on. Each price proposed conveys information to the buyer, and each counteroffer, or refusal, provides information for the seller. In a market with perishable goods or in one where buyers can be separated according to how long they remain in the market, one might expect to see declining prices over the day. Although in a world where waiting is not costly, the prices at the end of the day should be the same as at the beginning if the appropriate strategies were adopted, there are various explanations for the fact that, in reality, descending prices are frequently observed. The literature on the “declining price phenomenon” in auctions, Ashenfelter, 1989, McAfee and Vincent, 1993 and Pezanis-Christou, 1997, bears witness to this. However, curiously in Härdle and Kirman (1995), we found that this feature was essentially absent from the Marseille fish market. To get a clearer picture of the evolution of prices in this market, one could think of relating the analysis to the bargaining under two-sided uncertainty literature. In that case, both buyer and seller have information that is unknown to the other, and it is typically assumed that the information in question is the “value” of the object over which bargaining is taking place. In our case the information that is being implicitly conveyed is the aggregate quantity available and hence which prices may obtain. Thus, a refusal of a price by a buyer may reflect his having found a cheaper price elsewhere or his lack of fear of not finding what he wants elsewhere. This information should be useful to the seller who may then modify the price he has set. Similarly, if several buyers in succession accept the price asked immediately, then the seller might reasonably infer that this product is in short supply and then modify his price accordingly. In other words, the behaviour of the buyer is a signal about his reservation price that, in turn, reflects his ideas about the distribution of prices available. The problem is that the situation we have described does not correspond to the standard literature since several different partners are involved successively. Thus the offers and counteroffers in one matching influence those made in a subsequent matching, but the new partner does not have the same information as if he were there from the outset. If all agents of each type, buyer or seller, were identical, the fact that the market unfolds in this fashion would have no significance. However, the problem would be of a different nature since each seller would be aware of the state of the market from the outset. As it is, sellers obtain their stocks from different sources, they have certain clients who are loyal and do not go elsewhere, and the clients have different demands. Thus, although the price charged to each particular buyer is specific to the seller involved, that price is influenced by the general state of the market. What price I, as a buyer, can obtain today will depend on what the seller I visit has had to pay and his view of the quantity available on the market today. The maximum price that I am willing to accept, my reservation price, will depend on the offers that I have obtained previously and my view of the quantity available. Each time there is a meeting, information is conveyed, and the price asked in the next period may be influenced by that information. Since our data is for one seller, we cannot track the reactions of buyers as they move from one seller to another. However, we can observe the reactions of our seller to each meeting. The purpose of this paper is to examine those reactions.

In this paper we have analysed the effect of the bargaining process on prices. We have observations not only on the prices of transaction but also on offers and counteroffers even when no transactions took place. We first suggested a theoretical approach to the overall problem faced by the seller that we observed and then suggested a simple model to explain how the seller revised his beliefs over the day as he was faced with different buyers. The model predicted that proposed prices would decline over the day. More importantly we constructed an index of the seller’s bargaining power, and the model predicted that this would decline over the day. The data from the wholesale fruit and vegetable market in Marseille was consistent with these predictions.