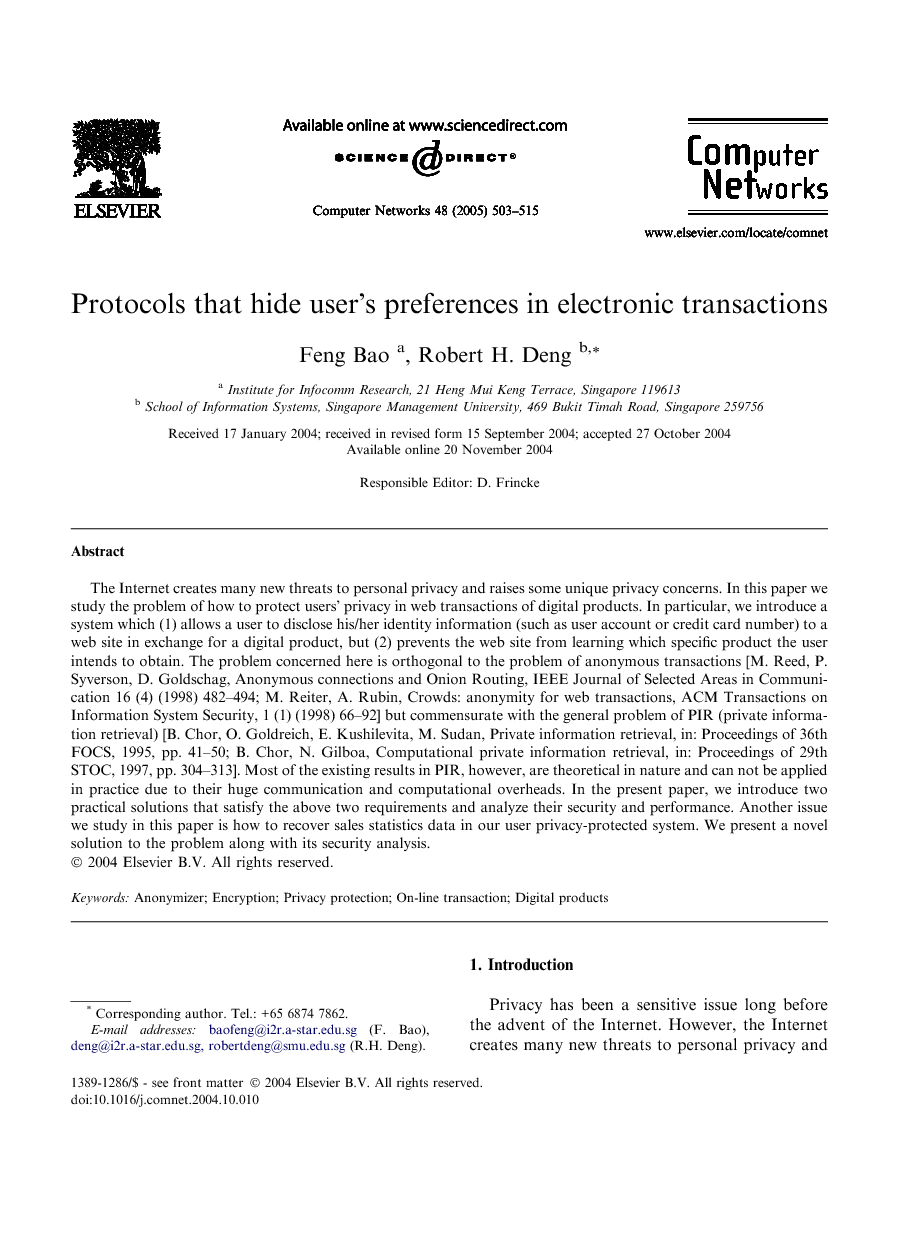 The Internet creates many new threats to personal privacy and raises some unique privacy concerns. In this paper we study the problem of how to protect users’ privacy in web transactions of digital products. In particular, we introduce a system which (1) allows a user to disclose his/her identity information (such as user account or credit card number) to a web site in exchange for a digital product, but (2) prevents the web site from learning which specific product the user intends to obtain. The problem concerned here is orthogonal to the problem of anonymous transactions [M. Reed, P. Syverson, D. Goldschag, Anonymous connections and Onion Routing, IEEE Journal of Selected Areas in Communication 16 (4) (1998) 482–494; M. Reiter, A. Rubin, Crowds: anonymity for web transactions, ACM Transactions on Information System Security, 1 (1) (1998) 66–92] but commensurate with the general problem of PIR (private information retrieval) [B. Chor, O. Goldreich, E. Kushilevita, M. Sudan, Private information retrieval, in: Proceedings of 36th FOCS, 1995, pp. 41–50; B. Chor, N. Gilboa, Computational private information retrieval, in: Proceedings of 29th STOC, 1997, pp. 304–313]. Most of the existing results in PIR, however, are theoretical in nature and can not be applied in practice due to their huge communication and computational overheads. In the present paper, we introduce two practical solutions that satisfy the above two requirements and analyze their security and performance. Another issue we study in this paper is how to recover sales statistics data in our user privacy-protected system. We present a novel solution to the problem along with its security analysis.

In this paper we have proposed a system architecture for user privacy protection in transactions of digital products. We also presented two protocols that are secure and highly efficient. Although our system makes use of an anonymous communication system for on-line distribution of digital products, they are not absolutely necessary. Some other means can achieve certain degree of user anonymity. For example, using a free proxy can protect user’s IP address, domain name and the owner name of the user’s host server. By disabling cookies in user’s browser, a web site will not be able to correlate the user previous connections to the site. It is commonly recognized that one of the most important issues for e-commerce of digital products is content protection and management. This is an on-going effort in a number of industrial initiatives. So far it is still not clear what copyright protection technology will finally be adopted by industries. There have been extensive research efforts for copyright protection, such as watermarking, fingerprint, tamper-resistant hardware and tamper-resistant software. Although not explicitly stated, tamper-resistant hardware or software are gaining momentum. This is evident from EBX and SDMI technical specifications. In the technical specification of EBX v8.0 [13], it is required that all the e-books must be encrypted for any form of distribution and be decrypted within e-book readers, which should be a sort of tamper-resistant system. The proposed system in this paper is in general compatible with EBX and SDMI frameworks. However, additional efforts are required to study detailed integration issues with specific content distribution and protection systems. For example, in EBX v8.0, voucher management plays an important role. Therefore it is necessary to study how to seamlessly integrate our system with EBX’s voucher management system. Sometimes it is necessary for a merchant to know the sales figures, such as the number of copies sold for each digital product. To guarantee both privacy protection and sales statistics recovery, more sophisticated cryptographic techniques are used. However, the method presented in this paper is not very efficient when the required public key operations are implemented in software. There is a tradeoff between number of providers that can be supported and the processing speed. Finding more efficient method could be a research challenge.