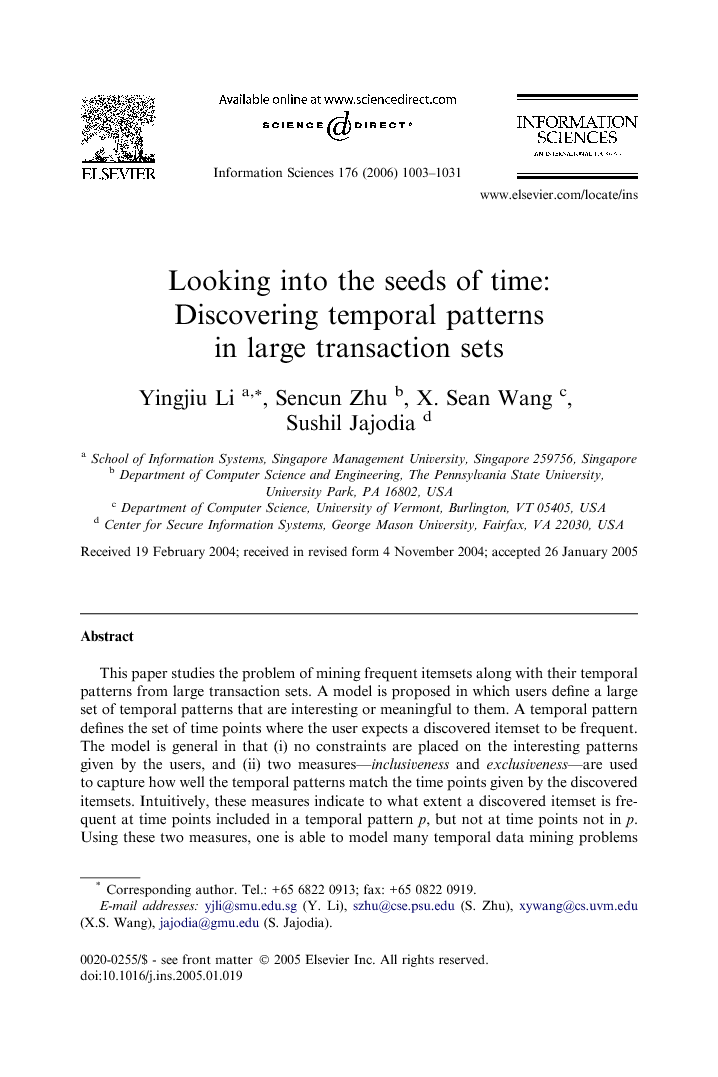 This paper studies the problem of mining frequent itemsets along with their temporal patterns from large transaction sets. A model is proposed in which users define a large set of temporal patterns that are interesting or meaningful to them. A temporal pattern defines the set of time points where the user expects a discovered itemset to be frequent. The model is general in that (i) no constraints are placed on the interesting patterns given by the users, and (ii) two measures—inclusiveness and exclusiveness—are used to capture how well the temporal patterns match the time points given by the discovered itemsets. Intuitively, these measures indicate to what extent a discovered itemset is frequent at time points included in a temporal pattern p, but not at time points not in p. Using these two measures, one is able to model many temporal data mining problems appeared in the literature, as well as those that have not been studied. By exploiting the relationship within and between itemset space and pattern space simultaneously, a series of pruning techniques are developed to speed up the mining process. Experiments show that these pruning techniques allow one to obtain performance benefits up to 100 times over a direct extension of non-temporal data mining algorithms.

This paper presented a general model for mining of temporal patterns along with frequent itemsets in large transaction sets. The model allows users to define any types of temporal patterns and choose any of the four types of matches. By exploiting the relationship between itemset space and pattern space, a series of pruning techniques are devised so as to speed up the mining process. Our experiments show performance benefits up to 100 times over a less sophisticated approach. The proposed early-pruning technique is designed to prune out those itemset-pattern pairs that do not satisfy the inclusiveness requirement at the early stage. In the future, we plan to develop similar technique for pruning those that do not satisfy the exclusiveness requirement. The incorporation of such early pruning techniques may further improve the performance of our algorithm. Mining temporal patterns involves investigating not only large itemset space and pattern space, but also a large amount of data collected in a long history. It is thus crucial to develop parallel or distributed algorithms for large scale data mining. It would also be interesting to devise online and incremental algorithms for this problem.