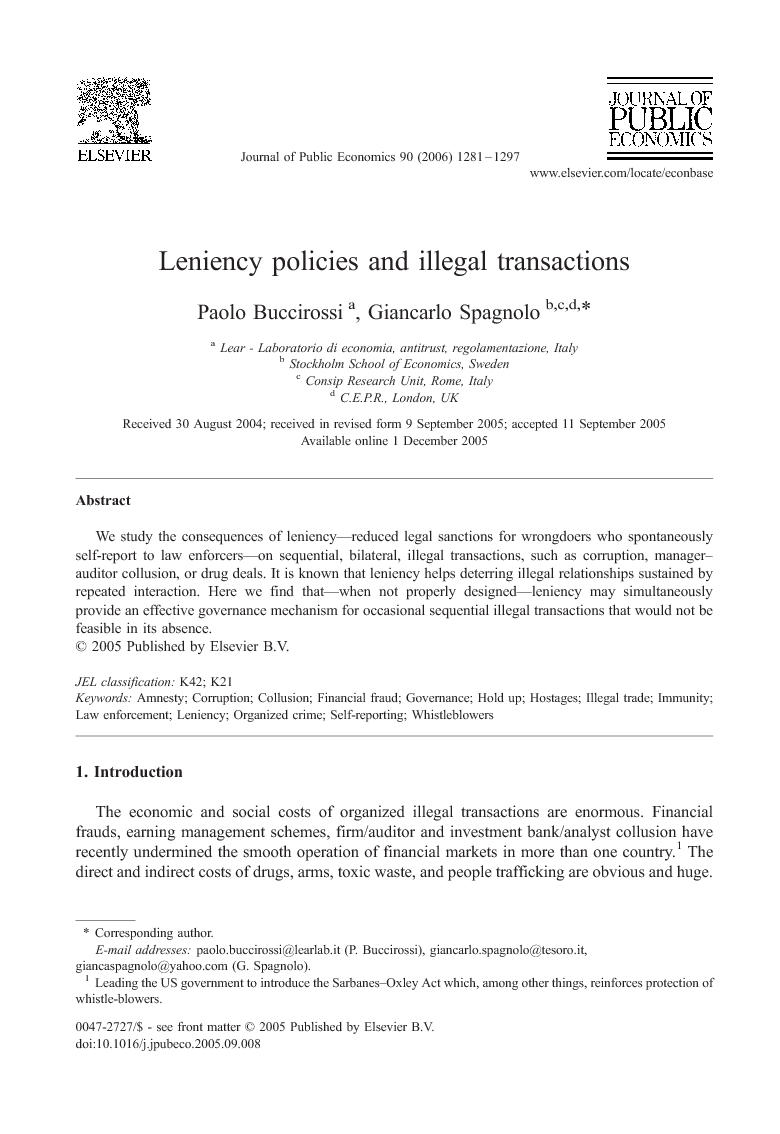 We study the consequences of leniency—reduced legal sanctions for wrongdoers who spontaneously self-report to law enforcers—on sequential, bilateral, illegal transactions, such as corruption, manager–auditor collusion, or drug deals. It is known that leniency helps deterring illegal relationships sustained by repeated interaction. Here we find that—when not properly designed—leniency may simultaneously provide an effective governance mechanism for occasional sequential illegal transactions that would not be feasible in its absence.

Within a stylized model we characterized the effects on the viability of occasional, sequential illegal transactions of all conceivable parametrizations of leniency policies for wrongdoers that spontaneously self-report to the law enforcing agency, turning in their partners. The results highlight a risk involved in using moderate forms of leniency in law enforcement, forms that only cancel or reduce self-reporting parties' sanctions below the expected fine they would be subject to without reporting. Economists are aware that poorly designed incentive schemes may have counterproductive side effects, and leniency programs—as the law enforcement system in general—are incentive schemes. The moderate form of leniency often implemented around the world, while plausibly deterring some long-term criminal arrangements sustained by repeated interaction, may have a counterproductive side effect: it could be exploited by sophisticated wrongdoers to implement occasional illegal transactions that would not be feasible otherwise. More generous forms of leniency that offer a reward to at least one party if he or she self-reports, if appropriately designed and managed, are not subject to this potential drawback and may further increase deterrence of long-term criminal relationships. Enriching the model by introducing asymmetric information, uncertainty, mistakes in law enforcement, and other important features of reality we kept out of our model will surely modify the boundaries of our characterization, and it will be very interesting to understand in which direction. However, we are fairly confident that our qualitative conclusions will not change with future work. Leniency for wrongdoers that spontaneously self-report is a very powerful but also a potentially dangerous tool, that must therefore be properly designed and managed with care.