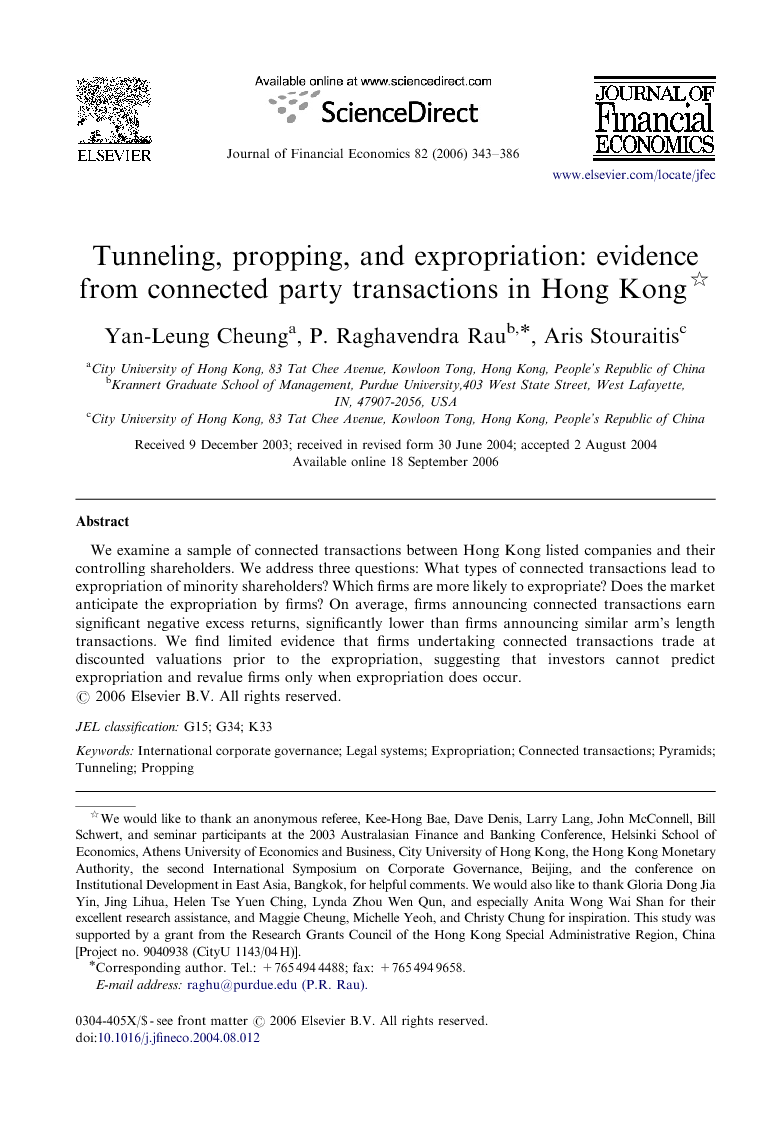 In this paper we report direct evidence of expropriation of minority shareholders using data on connected transactions between companies listed in the Stock Exchange of Hong Kong and their main shareholders or directors during 1998–2000. In contrast to previous studies, which use indirect proxies for the likelihood of expropriation (LLSV, 2002; Claessens, Djankov, Fan, and Lang, 2002; Lemmon and Lins, 2003; Joh, 2003), we analyze specific transactions that could lead to expropriation and substantiate the presence of real tunneling in the Hong Kong stock market. We find that minority shareholders experience significant value losses when companies undertake connected transactions, and our data allow us to explore in detail the mechanisms through which the expropriation takes place. Our results provide support for some earlier studies. The effect of the legal system on expropriation (La Porta et al., 1998 and La Porta et al., 2000b; Johnson, La Porta, Lopez-de-Silanes, and Shleifer, 2000) is highlighted in our data by the higher likelihood of connected transactions by firms whose ultimate ownership can be traced to mainland China and that are therefore partially protected from litigation by transferring assets outside the jurisdiction of Hong Kong courts. Bertrand, Mehta, and Mullainathan (2002) suggest that tunneling within Indian business groups occurs primarily through non-operating earnings items. Our evidence supports this view, because less than 15% of the transactions in our sample would impact operating earnings and the majority of transactions would give rise to exceptional non-operating earnings items. Finally, consistent with Bae, Kang, and Kim (2002), we find that firms providing cash assistance to third parties experience value losses. Some of our results, however, conflict with conclusions reached in the earlier literature. In contrast to Buysschaert, Deloof, and Jegers (2004), who do not find any evidence of expropriation of minority shareholders in equity transfers within Belgian business groups, we show that equity sales to connected persons in Hong Kong are associated with large value losses for minority shareholders. This suggests that their results could stem from Belgian groups that were in the process of simplifying their complex cross-ownership structures in the late 1990s instead of firms expropriating minority shareholders. More significantly, earlier studies suggest that East Asian firms trade at a discount that is cross-sectionally related to the divergence between the cash-flow and control rights of the main shareholders (Claessens, Djankov, Fan, and Lang, 2002; Lemmon and Lins, 2003; Joh, 2003). This divergence proxies for the likelihood of expropriation. Although the divergence between cash-flow and control rights could proxy for expropriation that is not reflected in our data (small transactions that fall below the threshold requiring stock exchange notification or illegal transactions that the companies do not disclose), we fail to find that firms in which controlling shareholders do expropriate trade at discounted valuations relative to other Hong Kong firms in our sample (with the exception of firms whose ultimate owners can be traced to mainland China). This creates an interesting puzzle. While the market seems to punish firms for tunneling episodes, there does not seem to be a systematic discount when we directly examine companies that have the potential to engage in such transactions. A number of explanations can be offered for this contradiction. First, the discount observed when the divergence between cash-flow and control rights is used to proxy for expropriation either might be related to factors other than expropriation or might proxy for forms of expropriation that our data do not capture. Second, investors could be overoptimistic, systematically underweighting the probability that firms might engage in expropriating wealth from their minority shareholders. Consequently, they revalue firms only when tunneling actually happens. Third, the contradiction could arise as an outcome of optimal firm contracting. For example, while controlling shareholders might extract wealth in periods when the economy is stable, they might choose to prop up firms in periods of macroeconomic shocks. Overall, therefore, we would not see investors a priori discounting firms with potential for expropriation. Because we examine the Hong Kong market over a period of time when the markets are stable, our data will not allow us to capture this effect. Finally, our results leave open the possibility that the entire Hong Kong market is discounted to reflect the possibility of expropriation. In summary, our analysis allows us to understand in greater detail the ways through which expropriation of minority shareholders takes place in firms with concentrated ownership. Given that connected transactions feature prominently in many recent corporate scandals around the world, such as the Enron collapse in the United States, a systematic analysis of such deals can improve understanding of different types of agency costs.