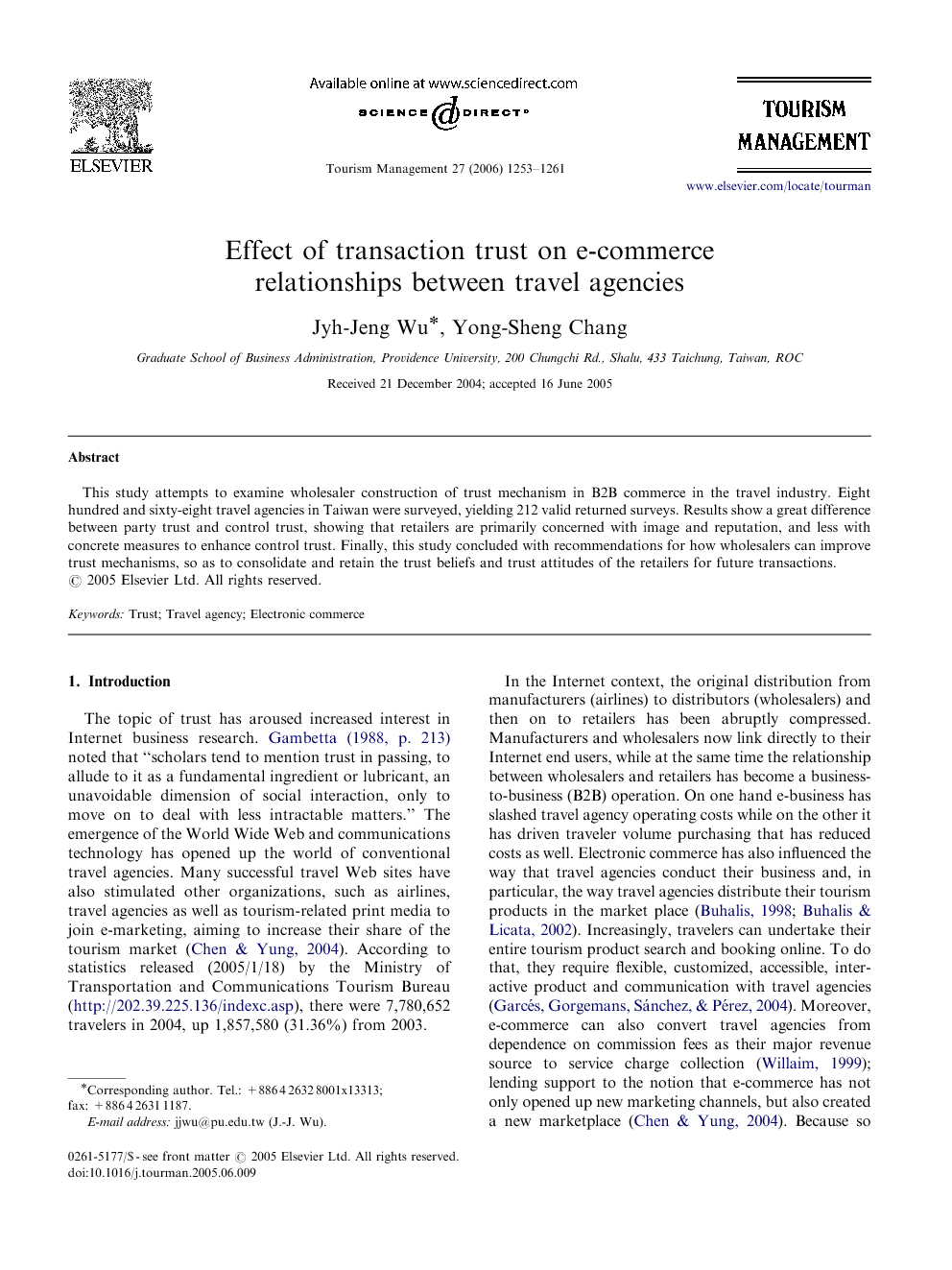 This study attempts to examine wholesaler construction of trust mechanism in B2B commerce in the travel industry. Eight hundred and sixty-eight travel agencies in Taiwan were surveyed, yielding 212 valid returned surveys. Results show a great difference between party trust and control trust, showing that retailers are primarily concerned with image and reputation, and less with concrete measures to enhance control trust. Finally, this study concluded with recommendations for how wholesalers can improve trust mechanisms, so as to consolidate and retain the trust beliefs and trust attitudes of the retailers for future transactions.

The topic of trust has aroused increased interest in Internet business research. Gambetta (1988, p. 213) noted that “scholars tend to mention trust in passing, to allude to it as a fundamental ingredient or lubricant, an unavoidable dimension of social interaction, only to move on to deal with less intractable matters.” The emergence of the World Wide Web and communications technology has opened up the world of conventional travel agencies. Many successful travel Web sites have also stimulated other organizations, such as airlines, travel agencies as well as tourism-related print media to join e-marketing, aiming to increase their share of the tourism market (Chen & Yung, 2004). According to statistics released (2005/1/18) by the Ministry of Transportation and Communications Tourism Bureau (http://202.39.225.136/indexc.asp), there were 7,780,652 travelers in 2004, up 1,857,580 (31.36%) from 2003. In the Internet context, the original distribution from manufacturers (airlines) to distributors (wholesalers) and then on to retailers has been abruptly compressed. Manufacturers and wholesalers now link directly to their Internet end users, while at the same time the relationship between wholesalers and retailers has become a business-to-business (B2B) operation. On one hand e-business has slashed travel agency operating costs while on the other it has driven traveler volume purchasing that has reduced costs as well. Electronic commerce has also influenced the way that travel agencies conduct their business and, in particular, the way travel agencies distribute their tourism products in the market place (Buhalis, 1998; Buhalis & Licata, 2002). Increasingly, travelers can undertake their entire tourism product search and booking online. To do that, they require flexible, customized, accessible, interactive product and communication with travel agencies (Garcés, Gorgemans, Sánchez, & Pérez, 2004). Moreover, e-commerce can also convert travel agencies from dependence on commission fees as their major revenue source to service charge collection (Willaim, 1999); lending support to the notion that e-commerce has not only opened up new marketing channels, but also created a new marketplace (Chen & Yung, 2004). Because so many of these transactions take place in cyberspace where buyer and seller have no face-to-face connection, trust is a critical determinant of successful B2B transactions (Dwyer, Schurr, & Oh, 1987; Mayer, Davis, & Schoorman, 1995; Morgan & Hunt, 1994; Reichheld & Schefter, 2000; Saparito, Chen, & Sapienza, 2004). Although a number of studies (Castelfranchi & Tan, 2002; Kim, Foscht, & Collins, 2004; Luo, 2002; Mayer et al., 1995; McKnight & Chervany, 2002; Morgan & Hunt, 1994; Tan & Thoen, 2001) have addressed Internet B2B transactions from the perspective of trust at various levels, few empirical studies have been conducted on the wholesaler response to the way trust affects retailer transaction intentions in the travel e-commerce industry. This study differs from past research in adapting the theory of reasoned action (TRA) (Fishbein & Ajzen, 1975) as the conceptual framework. The TRA is designed to explain various human behaviors, emphasizing the strong correlations among beliefs, attitudes, and intentions (Becker & Gibson, 1998; Chang, 1998; Felton, Dimnik, & Northey, 1995; Kolekofski & Heminger, 2003; Shih, 2004; Vijayasarathy, 2004). TRA is a widely studied model from social psychology concerned with the determinants of consciously intended behaviors (Fishbein & Ajzen, 1975). According to TRA, a person's performance of a specified behavior is determined by his or her behavioral intention to perform the behavior, and behavioral intention is jointly determined by the person's attitude and subjective norm concerning the behavior in question. A person's attitude toward a behavior is determined by his or her salient beliefs, while subjective norm is determined by normative beliefs and motivation to comply (Davis, Bagozzi, & Warshaw, 1989). The purpose of this study is to examine how trusting beliefs, attitudes and transaction intentions affect each other, and then analyze the types of transaction trust that affect wholesaler perception of retailer intentions, and ascertain the roles and importance of party trust and control trust throughout the entire transaction process, in order to generate useful recommendations for wholesalers.

The purpose of this study is to investigate the effect of transaction trust on relationships between travel agencies in e-commerce, to explore the four trusting beliefs of wholesalers from the perspective of retailers, and their effects on party trust and control trust in deriving the mutual transaction intentions. The empirical findings were: First, ability, benevolence, integrity, and predictability have a significant effect on party trust and control trust. We found that the four beliefs are antecedent factors of trust, consistent with the work of previous researchers (Mayer et al., 1995; McKnight & Chervany, 2002). Second, party trust has positively significant effect on transaction intentions while control trust has not; it indicates that the good reputation and rating of wholesaler is real retailer considered factors in the transaction process (Castelfranchi & Tan, 2002). Internal resources and abilities of an enterprise could guide operational strategy and direction, eventually becoming the main driver of enterprise profit. Nevertheless, what is the competitive advantage to travel agencies in employing e-commerce as a trading platform? This study recommends that in undertaking B2B trading, apart from mutual trust, the wholesalers must give assurance of irreplaceable resources, including technological, financial, or human resources. There are several reasons for this. First, corporate reputation alone is an insufficient basis for mutual trust in online dealing between the retailers and the wholesalers. Second, since expertise and package tours are comprehensive, wholesalers should aggressively seek to resolve mutual problems with retailers. Third, wholesalers must pay attention to the retailer's ability to make a profit, constructing comprehensive package holidays that offer assured client resources. Thus it serves to heighten attractiveness and draws more retailers, ultimately increasing performance. The single most important factor is the corporate reputation and industry rating. This study proposes party trust to be the most important property in B2B trading for a company. Tan and Thoen (2001) reasoned that over time, as online dealing becomes increasingly prevalent, once a business acquires reputable awards such as certification of privacy protection (for example, BBB Online and TRUSTe) or security measures (for example, HiTRUST), for posting on its Web page, company reputation and consumer confidence will be bolstered. This is essentially an enhancement of control trust. There are also managerial implications to our research. A trustworthy wholesaler travel Web site should offer trading partners integrity. Information that enhances retailer confidence in the company should be clearly revealed on the Web site. Travel Web sites should also integrate email services so that when retailers wish to learn of package tours or to form a package tour, wholesalers will be able to respond directly, or to confirm receipt of an inquiry by a return email that informs the inquirer the request is being processed. After completion of a transaction, it is advisable for wholesalers to provide a transaction tracking number for the retailers in order to access wholesaler order files with a PIN (personal identification number) to keep track of the order progress. A recognized brand is undoubtedly the most valuable property of a company, for it functions as a symbol of trust. It makes good sense for wholesalers of respected reputation to extend their brands from traditional channels to the virtual network. This will not only enhance and accelerate the willingness of retailers to trust, but will also promote integration of overall marketing resources. Given that this study was a cross-sectional design, the actual transaction behaviors between the retailers and the wholesalers could not be inspected in detail. Further research may incorporate a vertical section into the research design, to investigate actual transaction conditions for comparison. In the course of designing the survey instrument, senior travel agency managers consulted observed that for travel agencies in e-commerce, sometimes relationship marketing is considered in B2B trading. This is because in building and promoting the business relationships, trust is understood as a vital driving factor (Morgan & Hunt, 1994). Finally, in addition to quantitative data analysis, qualitative research through case studies will surely contribute to enhancing the thoroughness and validity of the research.