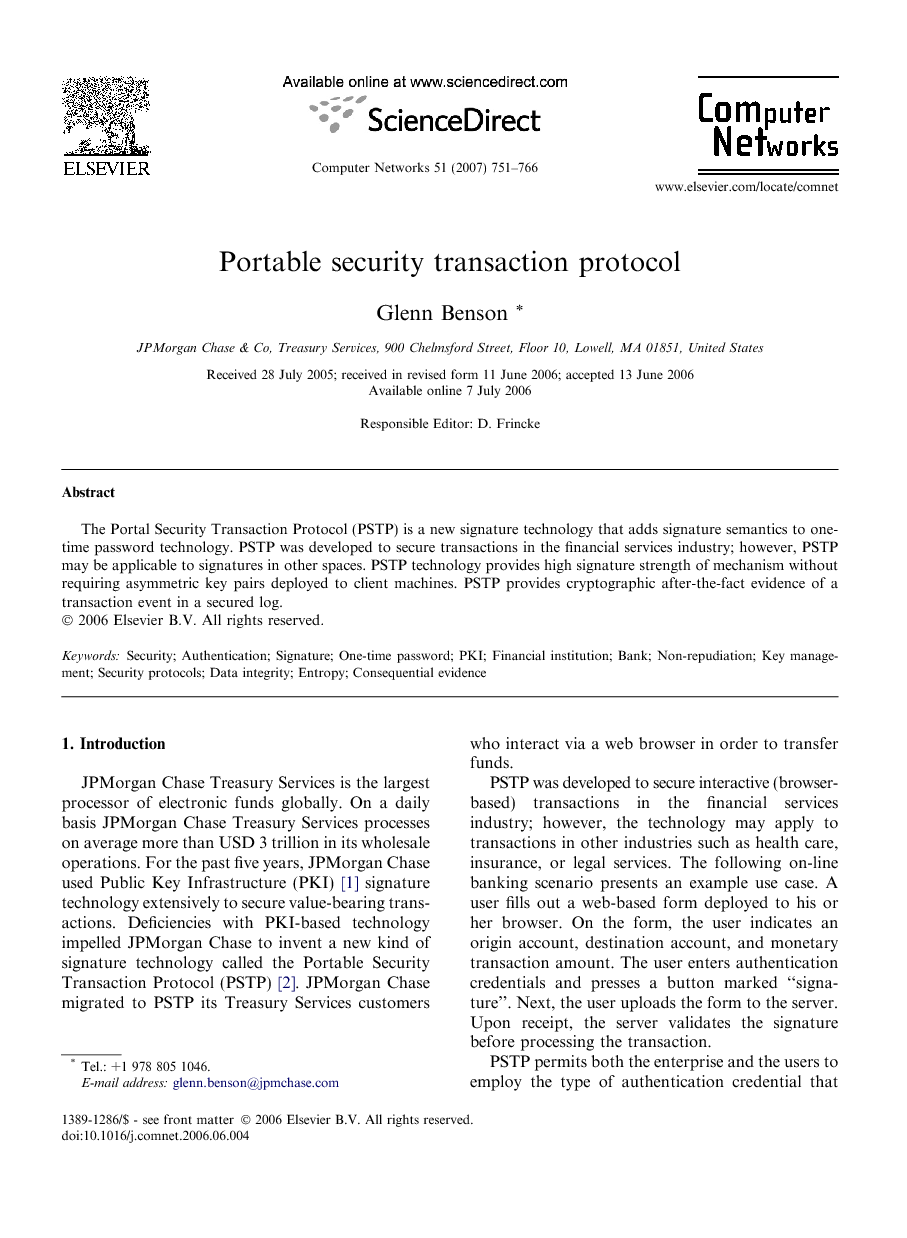 The Portal Security Transaction Protocol (PSTP) is a new signature technology that adds signature semantics to one-time password technology. PSTP was developed to secure transactions in the financial services industry; however, PSTP may be applicable to signatures in other spaces. PSTP technology provides high signature strength of mechanism without requiring asymmetric key pairs deployed to client machines. PSTP provides cryptographic after-the-fact evidence of a transaction event in a secured log

The comparison between PSTP-based signatures and PKI-based signatures is complex. Both technologies provide similar functional characteristics (e.g., message authenticity, integrity, replay protection, and consequential evidence). When deployed using properly secured token media, both technologies adequately protect confidential keying material. From a purely cryptographic perspective, a PKI has an advantage because the server has no access to the client’s confidential keying material. At first glance, this advantage provides the appearance that a server cannot forge a valid signature on a client’s behalf. However, this appearance is merely a façade. The timestamp server can create a signature using a compromised asymmetric key pair, and change history by moving the signing date so that it precedes the date that the asymmetric key pair first appeared on the revocation list. Other nuances in a PKI’s Certificate Authority also exist which further degrades the cryptographic advantages of a PKI. PSTP enjoys some advantages over PKI technology from a security perspective. Since an OTP inherently requires user interaction, malware on a user’s machine cannot sign without the user’s knowledge. When one takes into account all of the characteristics of PSTP and PKI, both technologies provides excellent security. However, both technologies have caveats and nuances that render a comparison of strength of mechanism difficult to quantify. One should view PSTP as an alternative to PKI, as opposed to a general-purpose replacement. Straight-through processing which requires no explicit human interaction is a better candidate for PKI than PSTP technology, because no one would be available to copy the OTP token value from the OTP device token to a computer. Furthermore, the administrators of both peers in the straight-through processing system should have the ability and motivation to handle an asymmetric key pair. A browser-based use case, on the other hand, is more suited for PSTP. An OTP device token’s lack of electronic connection between the user’s machine and the OTP device token has installation, mobility, and security advantages. PSTP signatures, paper-based signatures, and PKI-based signatures all have inherent costs. Whenever the cost of PSTP signatures is the least of the three methods, PSTP may provide the most viable solution. The clearest examples are environments that already deploy OTP device tokens. The financial service community is a good candidate because the high risk of financial transactions induces the financial community to use strong security. A second candidate is a corporation that deploys OTP device tokens to its employees so that they may remotely login through a VPN. Since the employees already own OTP device tokens, the enterprise may dual-purpose these tokens for PSTP signatures. So, for example, when the employee needs to sign an internal corporate document, e.g., change tax withholding status, then employee may use his or her OTP device token for the PSTP signature. Another use for PSTP is to business process re-engineer a paper-based environment. Consider, for example, a court document submission which requires a series of signatures. If the cost of handling the paper exceeds the cost of deploying an OTP device token, then PSTP may be a good, cost-saving solution. JPMorgan Chase Treasury Services successfully deployed PSTP technology for browser-based wholesale financial transactions. JPMorgan Chase dropped in PSTP software as a replacement for PKI software without significantly changing its applications’ programming logic. This successful deployment provides evidence that PSTP is a viable, currently available technology.