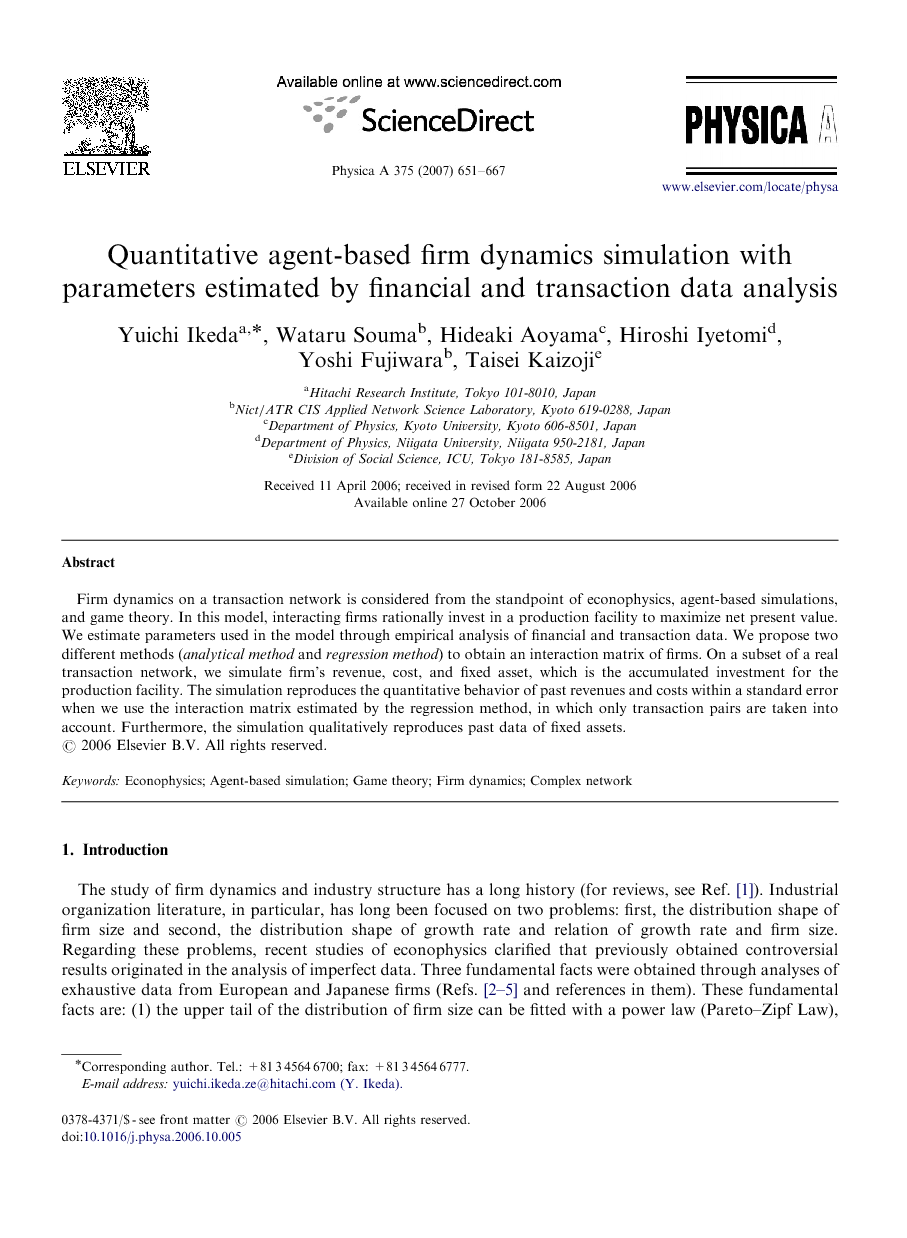 Firm dynamics on a transaction network is considered from the standpoint of econophysics, agent-based simulations, and game theory. In this model, interacting firms rationally invest in a production facility to maximize net present value. We estimate parameters used in the model through empirical analysis of financial and transaction data. We propose two different methods (analytical method and regression method) to obtain an interaction matrix of firms. On a subset of a real transaction network, we simulate firm's revenue, cost, and fixed asset, which is the accumulated investment for the production facility. The simulation reproduces the quantitative behavior of past revenues and costs within a standard error when we use the interaction matrix estimated by the regression method, in which only transaction pairs are taken into account. Furthermore, the simulation qualitatively reproduces past data of fixed assets.

The study of firm dynamics and industry structure has a long history (for reviews, see Ref. [1]). Industrial organization literature, in particular, has long been focused on two problems: first, the distribution shape of firm size and second, the distribution shape of growth rate and relation of growth rate and firm size. Regarding these problems, recent studies of econophysics clarified that previously obtained controversial results originated in the analysis of imperfect data. Three fundamental facts were obtained through analyses of exhaustive data from European and Japanese firms (Refs. [2], [3], [4] and [5] and references in them). These fundamental facts are: (1) the upper tail of the distribution of firm size can be fitted with a power law (Pareto–Zipf Law), (2) in the power-law region the growth rate of each firm is independent of the firm size (Gibrat's Law), and (3) outside the power-law region the Gibrat's Law dose not hold. Before those fundamental facts were obtained, many models were proposed to explain the power-law distribution of wealth and income, e.g. stochastic multiplicative processes without interactions (for example, Refs. [6], [7] and [8]), and those with interactions (for example, Refs. [9], [10], [11], [12], [13], [14], [15] and [16]). Though these models did succeed in reproducing the power-law distribution, they are far from a realistic model of firms. There are three reasons why previous models are not applicable to the real business world. The first reason is concerned with parameters controllable by managers. The distribution of random variables used in these models i.e., mean value and variance, can be controlled to obtain the desired power-law distributions of wealth and income. However, in real business, managers of firms cannot directly control wealth and income. The controllable parameter for managers is investment to the production facility. The second reason concerns with business-to-business transactions. In real business, managers of the firm determine the investment to their production facilities based on forecasted business-to-business transactions. Thus, it is important to incorporate a realistic network of the business-to-business transactions into the model. However, previous models have not seriously considered the transaction network. The third reason has to do with a quantitative description of firm activity. Previous studies have not considered a quantitative description of firm activity, but have concentrated only on the qualitative aspect of distribution shape. A quantitative description is needed in order to apply a model to a real business. Thus, model parameters have to be estimated through empirical data analysis. Hence, it is essential to develop a model that can capture various changes in the business environment by considering the activities of interacting firms, in order to obtain a model applicable to real business. The purpose of this article is to propose such a model. The important features of our model can be briefly summarized as follows: (1) managers of firms can control decisions for investment in the production facility, (2) a transaction network extracted through analysis of transaction data is considered, and (3) model parameters, including interaction parameters, are estimated through analysis of financial and transaction data. This article is organized as follows. In Section 2, an agent-based model of interacting firms is proposed, considering both of production and transaction. In Section 3, we take a small subset of a real transaction network through empirical analysis of the real data. For the transaction network, we estimate model parameters. In Section 4, a numerical simulation is made for the transaction network and the obtained revenues, costs, and fixed assets of firms are compared with past data. Section 5 is devoted to a summary.

An agent-based model of interacting firms, viewing inter-firm relationships as a many-body problem, was proposed. Firm dynamics on a transaction network was considered from the standpoint of econophysics, agent-based simulations, and game theory. In this model, interacting firms rationally invest in a production facility to maximize NPV. The distinctive features of our model are (1) managers of firms can control investment decision making for a production facility, (2) a transaction network extracted through analysis of transaction data is considered, and (3) model parameters, including interaction parameters, are estimated through analysis of financial and transaction data. The study simulated the performances of firms on a subset of a real transaction network obtained by analyzing transaction data, using interaction parameters estimated from financial statement analysis. While the size of the simulated transaction network was small, the simulation reproduced the quantitative behavior of past revenue and cost within a standard error when we use the interaction matrix estimated by the regression method in which only transaction pairs are taken into account. These simulation results suggest that it is essential to estimate interaction parameters with only transaction pairs. Furthermore, the simulation qualitatively reproduced past data of fixed assets. An actual merger caused the drastic change in past data from JFY2000 to JFY2001 and created the large difference between the simulation and past data. It is, however, noted that no computer simulation could predict such an unexpected event. Finally, we look ahead to future research. In this study, the production function is single variate, i.e., fixed asset, as shown in Eq. (10). In order to model investment behavior satisfactory, we should extend the production function with multiple variables, i.e., fixed assets and labor costs, as given by Eq. (9). It would also be desirable to implement a heuristic optimizer instead of using backward induction, because computation time and memory size required for backward induction grow exponentially with the number of agents. A further study will propose the method that improves the production function and replaces the backward induction of the game theory with a heuristic optimizer. With these improvements our agent-based model will be capable of simulating large-scale transaction network. Then we can verify the reliability of the model by studying the distributions for firm size and growth rate.