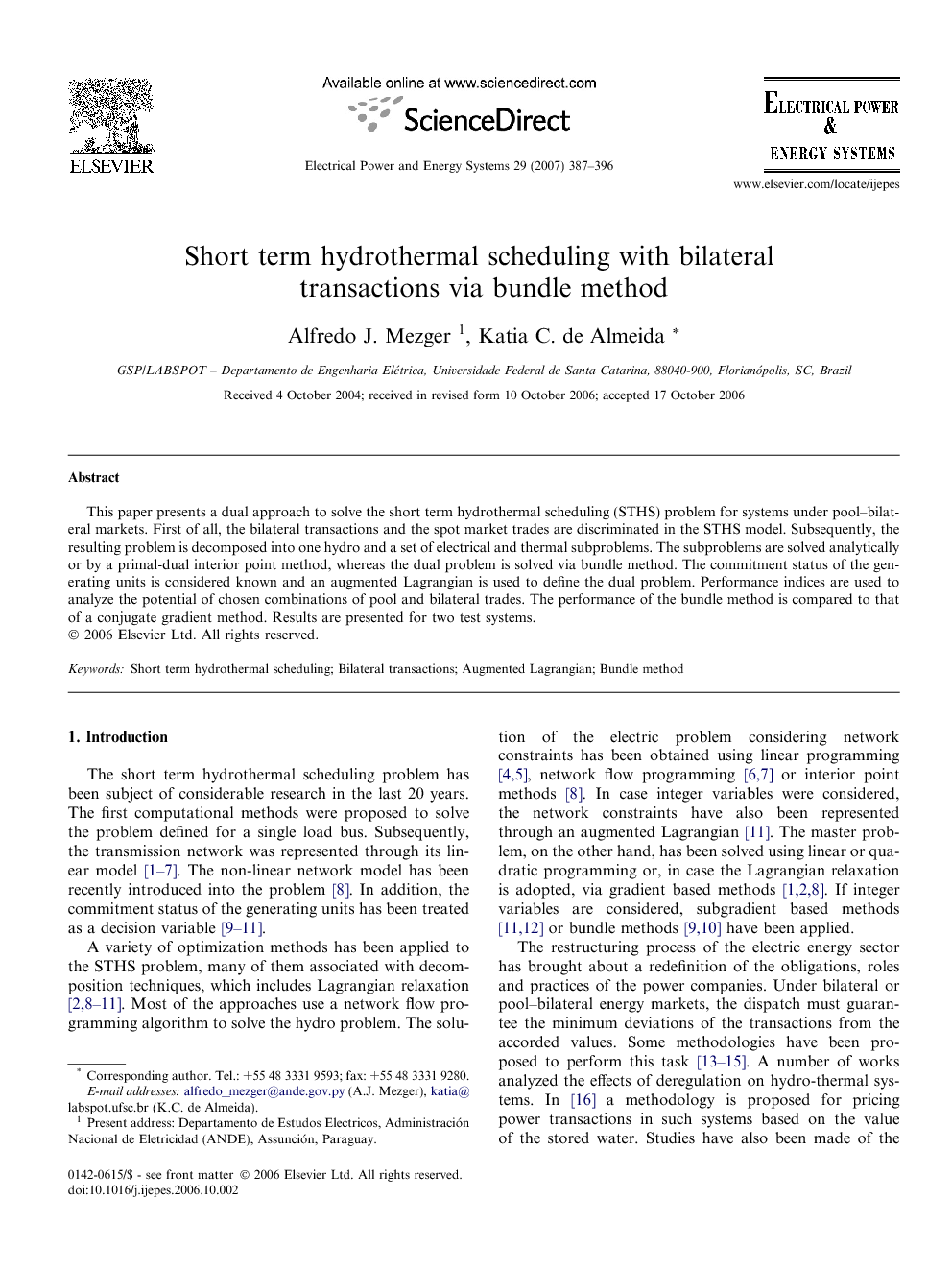 This paper presents a dual approach to solve the short term hydrothermal scheduling (STHS) problem for systems under pool–bilateral markets. First of all, the bilateral transactions and the spot market trades are discriminated in the STHS model. Subsequently, the resulting problem is decomposed into one hydro and a set of electrical and thermal subproblems. The subproblems are solved analytically or by a primal-dual interior point method, whereas the dual problem is solved via bundle method. The commitment status of the generating units is considered known and an augmented Lagrangian is used to define the dual problem. Performance indices are used to analyze the potential of chosen combinations of pool and bilateral trades. The performance of the bundle method is compared to that of a conjugate gradient method. Results are presented for two test systems

The short term hydrothermal scheduling problem has been subject of considerable research in the last 20 years. The first computational methods were proposed to solve the problem defined for a single load bus. Subsequently, the transmission network was represented through its linear model [1], [2], [3], [4], [5], [6] and [7]. The non-linear network model has been recently introduced into the problem [8]. In addition, the commitment status of the generating units has been treated as a decision variable [9], [10] and [11]. A variety of optimization methods has been applied to the STHS problem, many of them associated with decomposition techniques, which includes Lagrangian relaxation [2], [8], [9], [10] and [11]. Most of the approaches use a network flow programming algorithm to solve the hydro problem. The solution of the electric problem considering network constraints has been obtained using linear programming [4] and [5], network flow programming [6] and [7] or interior point methods [8]. In case integer variables were considered, the network constraints have also been represented through an augmented Lagrangian [11]. The master problem, on the other hand, has been solved using linear or quadratic programming or, in case the Lagrangian relaxation is adopted, via gradient based methods [1], [2] and [8]. If integer variables are considered, subgradient based methods [11] and [12] or bundle methods [9] and [10] have been applied. The restructuring process of the electric energy sector has brought about a redefinition of the obligations, roles and practices of the power companies. Under bilateral or pool–bilateral energy markets, the dispatch must guarantee the minimum deviations of the transactions from the accorded values. Some methodologies have been proposed to perform this task [13], [14] and [15]. A number of works analyzed the effects of deregulation on hydro-thermal systems. In [16] a methodology is proposed for pricing power transactions in such systems based on the value of the stored water. Studies have also been made of the problem of purchasing and selling power considering constraints imposed by the commitment and dispatching of the units [12]. The impact of power transactions on the system operation and on transmission losses has been analyzed as well [17]. The present work is a continuation of the study presented in [17]. It proposes a STHS model in which the bilateral transactions and the spot market trades are discriminated. A decomposition approach based on Lagrangian relaxation is used to solve this problem. The relaxation decomposes the STHS problem into a master (dual) problem and the thermal generation, the transmission and the hydro scheduling subproblems. The master problem is solved via bundle method, the hydro and the transmission subproblems are solved via primal dual interior point method and the thermal generation subproblem is solved analytically. To improve the rate of convergence of the bundle method, an augmented Lagrangian is used. The commitment status of the generating units is considered known. Performance indices are used to analyze the pool and bilateral trades. To better analyze the performance of the bundle method, this approach is compared to a conjugate gradient method. Results are presented for the Ward–Hale system and an equivalent of the Brazilian system [18]. The paper is organized as follows. First of all, the STHS problem and the performance indices are derived. Subsequently, the relaxation procedure is explained and the master problem and subproblems are described. Next, the algorithm based on the bundle method is explained and the conjugate gradiente method is briefly described. Some test results are then analyzed and, finally, some conclusions are put forward.

This paper presented a methodology to discriminate the pool and bilateral generation and loads in the short term hydrothermal scheduling problem. Such discrimination proved to be very useful for analyzing the impact of transactions on the system operation and potential gains of chosen combinations of pool and bilateral trades. The paper also proposed the adoption of a Lagrangian relaxation approach, together with the bundle method, to solve the resulting problem. The performance of the bundle method was analyzed by comparing it to a classical approach: the conjugate gradient of Fletcher Reeves. In case the augmented Lagrangian is not used, the performance of the bundle method was better, in terms of CPU time, than that of the conjugate gradient method. The performance of the bundle method was even better when the augmented Lagrangian was adopted, which indicates that it can be successfully used to solve the STHS problem for larger systems. Future works will concentrate on testing the algorithm on larger systems and on the representation of the AC network equations and the commitment status of the generation units.