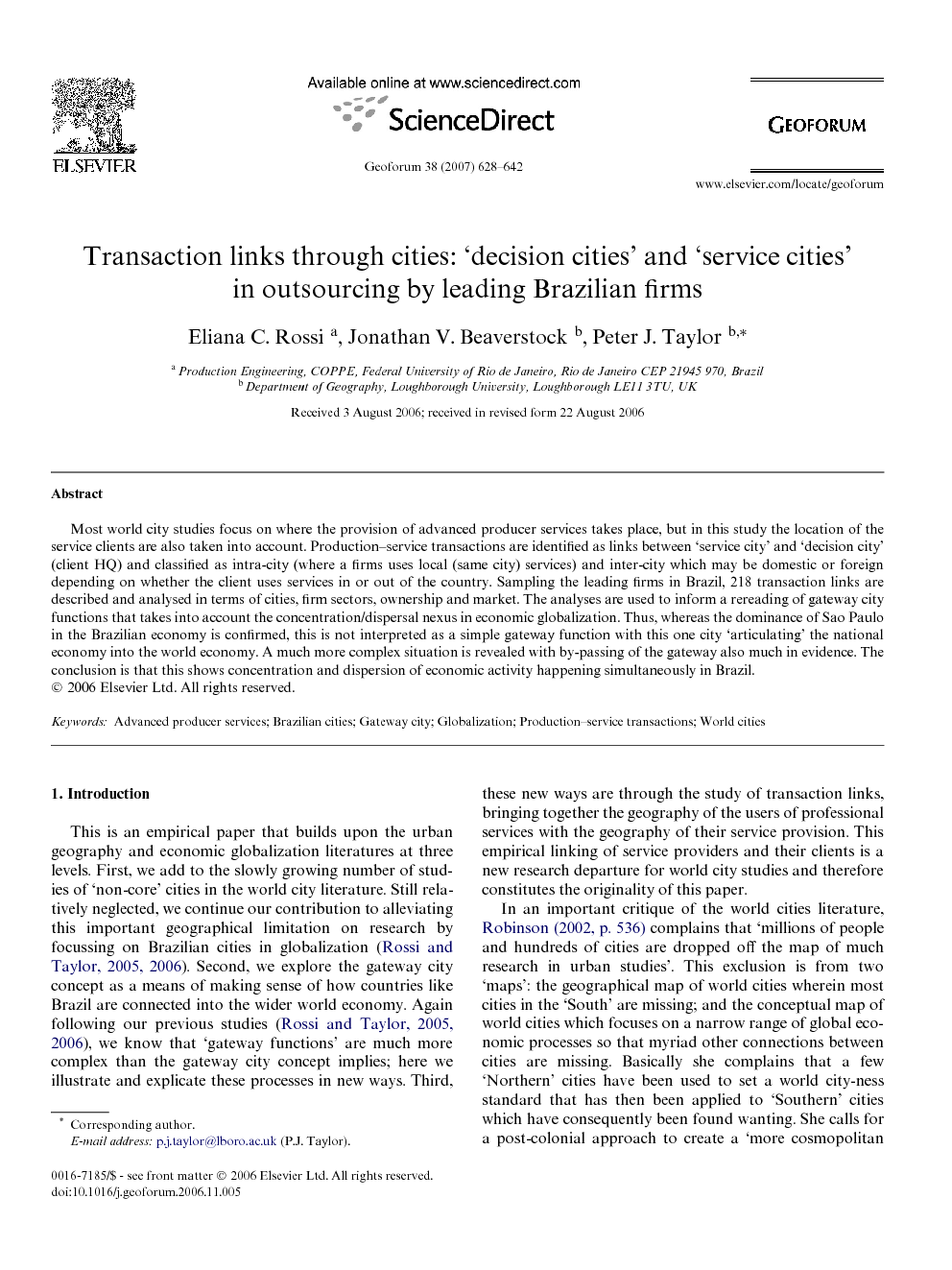 Most world city studies focus on where the provision of advanced producer services takes place, but in this study the location of the service clients are also taken into account. Production–service transactions are identified as links between ‘service city’ and ‘decision city’ (client HQ) and classified as intra-city (where a firms uses local (same city) services) and inter-city which may be domestic or foreign depending on whether the client uses services in or out of the country. Sampling the leading firms in Brazil, 218 transaction links are described and analysed in terms of cities, firm sectors, ownership and market. The analyses are used to inform a rereading of gateway city functions that takes into account the concentration/dispersal nexus in economic globalization. Thus, whereas the dominance of Sao Paulo in the Brazilian economy is confirmed, this is not interpreted as a simple gateway function with this one city ‘articulating’ the national economy into the world economy. A much more complex situation is revealed with by-passing of the gateway also much in evidence. The conclusion is that this shows concentration and dispersion of economic activity happening simultaneously in Brazil.

This paper has contributed three additions to the world cities and economic globalization literatures. First, at a conceptual level, we have combined the concentration/dispersion nexus of globalization studies with the gateway city concept of urban studies. Thus we have produced a new reading of the gateway process as part of a more complex pattern of globalization. Second, at a measurement level, we have created unique data for production–service transactions based upon cities. Thus we have been able to begin the task of studying the world city network enveloping production chains in new forms of analysis. Third, at an empirical level, we have contributed to putting more non-core cities ‘on the map’ of world cities through a detailed study of Brazilian cities in globalization from these new perspectives. Thus we have new evidence for how one major non-core country is integrating into a globalizing world economy. Since this is essentially an empirical paper we shall conclude by elaborating on the latter contribution. Sao Paulo came the prominence as Brazil’s dominant city before contemporary globalization; gateway function processes within globalization have enabled the city to continue its dominance. This is true also for the maintenance of the second city status for Rio de Janeiro. Thus Sao Paulo and Rio de Janeiro easily outrank all other Brazilian cities as both service and decision cities. They appear to be holding their own as cities ‘articulating’ the Brazilian economy into the encompassing world economy for both domestic and foreign-owned firms. However, there are globalising processes that are by-passing the gateway. Firms in Porto Alegre and Salvador are in no sense dependent on Sao Paulo or Rio de Janeiro for their production–service transactions. Thus, as well as concentration in Brazil’s core-region, these cities from other coastal regions imply the growth of a broader littoralization of production–service links in the current phase of the Brazilian economy. In addition there are foreign servicing links that by-pass Sao Paulo and Rio de Janeiro that derive from, but not only from, Belo Horizonte. In all these processes Brasilia is largely inactive suggesting that firms in the capital city are of little relevance in Brazil’s economic globalization. Clearly, what we have shown in Brazil appears to be a textbook case of the new economic complexity wherein global concentration and dispersion of economic activities are occurring simultaneously. This conclusion brings together current contrary interpretations of the Brazilian economy that champion just one of either increasing concentration or new dispersion. Both are happening.