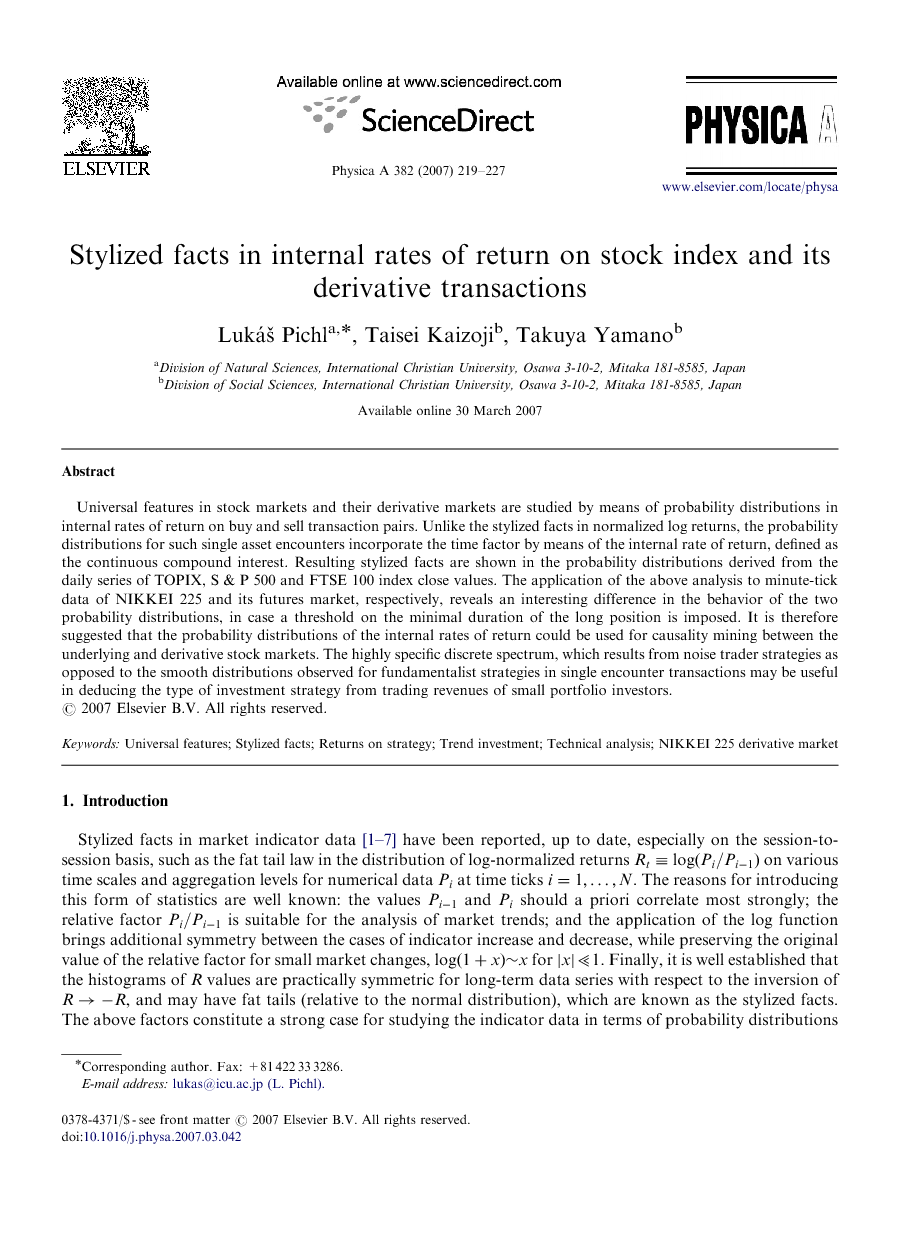 Stylized facts in market indicator data [1], [2], [3], [4], [5], [6] and [7] have been reported, up to date, especially on the session-to-session basis, such as the fat tail law in the distribution of log-normalized returns Rt≡log(Pi/Pi-1)Rt≡log(Pi/Pi-1) on various time scales and aggregation levels for numerical data PiPi at time ticks i=1,…,Ni=1,…,N. The reasons for introducing this form of statistics are well known: the values Pi-1Pi-1 and PiPi should a priori correlate most strongly; the relative factor Pi/Pi-1Pi/Pi-1 is suitable for the analysis of market trends; and the application of the loglog function brings additional symmetry between the cases of indicator increase and decrease, while preserving the original value of the relative factor for small market changes, log(1+x)∼xlog(1+x)∼x for |x|⪡1|x|⪡1. Finally, it is well established that the histograms of R values are practically symmetric for long-term data series with respect to the inversion of R→-RR→-R, and may have fat tails (relative to the normal distribution), which are known as the stylized facts. The above factors constitute a strong case for studying the indicator data in terms of probability distributions of normalized log returns. Last but not least, the ratio Pi/Pi-1-1Pi/Pi-1-1 is the profit (or loss) from buying the asset at session (or tick) i-1i-1 and selling it at i without transaction costs. In this paper, we follow and extend the interpretation of RtRt as an elementary transaction (i.e., a function on tick data) as a means of market data analysis. While the standard form of this function, i.e., Pi/Pj-1Pi/Pj-1 is based only on i-j=1i-j=1 correlations and can be both positive and negative, our intent is to develop a more general criterion which can allow for complex correlations between all ticks, i.e., j<ij<i within the entire data sample. In particular, the size of the tick segment i-ji-j in our framework depends on the analyzed data, and is defined by taking j as the minimum of i′>ii′>i, for which a required internal rate of return (IRR) is achieved on the tick data pair RiRi and RjRj. In broader terms, by using a probability density of returns on fundamental transactions, it may be possible to relate market stylized facts (data) to the ultimate paradigm of market investment, the optimal transaction (strategy). The problem of optimal investment [8] is also central in mathematical finance. Both the standard distribution of normalized log returns, and the above motivated distribution of internal rates of return (IRR transform) result from elementary transactions on a risky asset, hereafter referred to as a single encounter. The optimal transaction may involve a two-component portfolio (money and a stock index in this paper) or a multi-component portfolio with particular stock titles. Depending on whether the transaction profit is reinvested or not, the geometric mean or the arithmetic mean of the expected return of single encounter investment should be optimized [9]. The former case of geometric mean is known as the Kelly criterion [10], which specifies the optimal single encounter ratio x for one risky asset with return b and probability p by x=p-(1-p)/bx=p-(1-p)/b, in order to maximize the expectation value of the logarithm of the single encounter outcome, i.e., the economics’ utility function on one hand, which is identical with the entropy of this system on the other hand. That is where the present, probabilistic formulation of single asset encounter naturally relates to the Shannon's information entropy, and its generalized models. In general, the present approach should complement a variety of econometric, econophysics, statistical and artificial intelligence approaches to time series analysis [11], [12], [13] and [14]. The paper is organized as follows. Section 2 explains the theoretical rationale of the generalized stylized features as a transform in the internal rates of return. The single encounter investment in the continuous interest model is applied to the time series of TOPIX, S & P 500 and FTSE 100 data, for which the resulting IRR transforms are derived and their stylized features are discussed. In Section 3, the characteristic spectrum of one particular single encounter strategy based on the comparison of short-term and long-term trends is shown. Section 4 demonstrates both the standard and the present formulations of the stylized facts on the minute-tick data from NIKKEI 225 index, and its futures market, and discusses their causal relation in terms of the IRR transform. In Section 5, the stylized facts in the IRR transform are distinguished from the standard formulation in terms of normalized log returns. We conclude with final remarks in Section 6.

A framework for studying market statistics and its stylized facts based on the internal rate of return from single encounter transactions has been proposed and compared with the common log-normalized return approach. Based on the present formulation, an interesting stylized fact was observed in the coinciding functional form I(ρ)I(ρ) and the location of the optimal density of internal rate of return, ρ*ρ*, in the probability distributions of TOPIX, S & P 500 and FTSE 100 index data series on a 10 year scale. The IRR transform allows, in addition, for a spectral characteristics of single encounter strategies, which was demonstrated on the TOPIX data series for several cases of trend-following strategies. The discrete p(ρ)p(ρ) spectrum may serve as a fingerprint of particular market strategy; it can also possibly allow for determining the type of investment strategy from the series of its returns on individual transactions. The discrete spectrum feature may also present an interesting point of view on the possible role of moving averages in the stylized facts in numerical time series. The IRR transform has been further generalized by introducing a minimal interval T on compound interest time period, which screens the I(ρ)I(ρ) spectrum in a monotonous way. This generalization allowed for indirect identification of the lead–lag relation in the minute-tick series of NIKKEI 225 and its derivative market in the first two quartals of the year 2000.