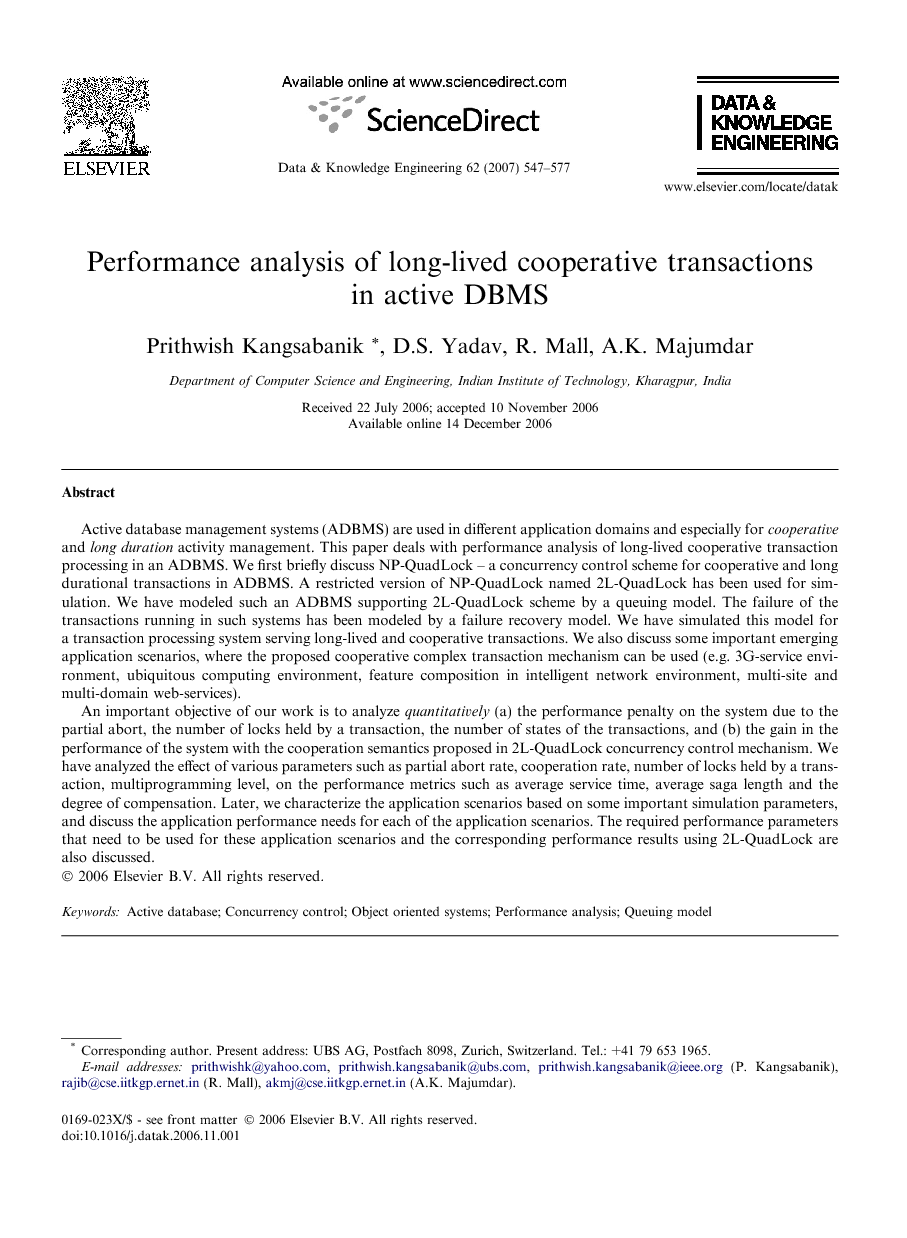 Active database management systems (ADBMS) are used in different application domains and especially for cooperative and long duration activity management. This paper deals with performance analysis of long-lived cooperative transaction processing in an ADBMS. We first briefly discuss NP-QuadLock – a concurrency control scheme for cooperative and long durational transactions in ADBMS. A restricted version of NP-QuadLock named 2L-QuadLock has been used for simulation. We have modeled such an ADBMS supporting 2L-QuadLock scheme by a queuing model. The failure of the transactions running in such systems has been modeled by a failure recovery model. We have simulated this model for a transaction processing system serving long-lived and cooperative transactions. We also discuss some important emerging application scenarios, where the proposed cooperative complex transaction mechanism can be used (e.g. 3G-service environment, ubiquitous computing environment, feature composition in intelligent network environment, multi-site and multi-domain web-services). An important objective of our work is to analyze quantitatively (a) the performance penalty on the system due to the partial abort, the number of locks held by a transaction, the number of states of the transactions, and (b) the gain in the performance of the system with the cooperation semantics proposed in 2L-QuadLock concurrency control mechanism. We have analyzed the effect of various parameters such as partial abort rate, cooperation rate, number of locks held by a transaction, multiprogramming level, on the performance metrics such as average service time, average saga length and the degree of compensation. Later, we characterize the application scenarios based on some important simulation parameters, and discuss the application performance needs for each of the application scenarios. The required performance parameters that need to be used for these application scenarios and the corresponding performance results using 2L-QuadLock are also discussed.

Traditional database systems are called passive because they execute transactions or query only when they are explicitly requested by the user or the application program. In contrast, active database systems are capable of executing transactions whenever some events occur. The occurrence of these events may take place due to changes in the database states. In active DBMS (ADBMS), transactions have the ability to monitor the database objects and to take specific actions when a particular event occurs in the database objects. This is specified by means of Event–Condition–Action rules or ECA rules. These events may be generated due to a transaction’s own object operation or due to the object operations generated by other transactions running in parallel. For some advanced database applications, it is necessary to monitor the conditions defined on the states of the database. As the conditions are satisfied, appropriate actions are invoked subject to the timing constraints. Examples of such applications, which are currently being developed using active databases, are hospital information system [1], Trading and stock control [2], Workflow management [3]. Increasing concurrency among transactions and maintaining the consistency of the database are two conflicting goals. This problem becomes more acute in ADBMS in the presence of long durational and cooperative transactions. The traditional notion of serializability as a correctness criterion turns out to be a bottleneck for long durational and cooperative transactions. In order to overcome this bottleneck, different kinds of transaction models e.g. Saga [4] and [5], nested transaction [6], cooperative transactions [7] have been developed. These transaction models generally use relaxed notion of correctness i.e., ACID (Atomicity, Consistency, Isolation and Durability) properties.

In this paper, we have analyzed the performance of the 2L-QuadLock scheme in presence of rollbacks and aborts by simulation. One of the objectives of this study has been to determine the extent of performance gain of the system with transaction cooperation, even in the presence of full/partial aborts and compensating actions. Another objective of this paper has been to show the efficacy of the presented cooperative transaction management scheme in different emerging application scenarios (e.g. in 3G-service environment, ubiquitous computing environment, feature composition in intelligent networks, multi-site and multi-domain web-services). Simulation experiments with different parameter values of partial abort rates, multiprogramming level, number of states of a complex transaction, number of locks of a base transaction, and cooperation rates have been carried out. The following are the major observations of the simulation: • Cooperation rate affects the average saga length, average service time for a base transaction, and CBT/BT ratio. A higher cooperation rate allows more transactions to interleave. Thus, a base transaction gets the lock at an earlier stage. This results in a reduced service time for a base transaction, a higher saga length due to possibility of executing more base transaction, and, a reduced CBT/BT ratio due to less number of compensating base transaction execution. • Partial abort rate affects the degree of compensation i.e., the CBT/BT ratio. Even with higher partial abort rates, the CBT/BT ratio and the average service time per base transaction decreases with increase in cooperation rate. • The system behaves in the same manner as the number of locks to be acquired by the base transaction (d) and the number of states in a complex transaction (k) increases. This is evident from the fact even with large value of d and k, the CBT/BT ratio and the average service time per base transaction decreases as the cooperation rate increases. Thus, these simulation results demonstrate the performance gain in 2L-QuadLock scheme due to high cooperation rate even in presence of higher failure rates, resource contention, multiprogramming level and the number of states in a complex transaction. We have also discussed the simulation parameters, which are effective in the different emerging application scenarios and the corresponding performance results. In the present simulation scenario, we assume that a CT may continue firing the next BT after commit of the current BT without any user waiting time (e.g. for input from the user who fired the CT at the terminal). The behavior of the users, which invoked the CT, is not taken into account in the simulation model. These issues need to be investigated in future work by adjusting the simulation model by taking care of variable duration in between firing of the BTs and also the behavior of the user firing the CTs. In addition, we have chosen to carry out the simulation experiments using incremental static locking technique, since in cooperative transaction execution environment the locks to be held on the objects are known in advance. Thus, this simulation results will be realistic for this particular class of transactions. A simulation study of cooperative transactions with dynamic locking would be also an interesting future work.