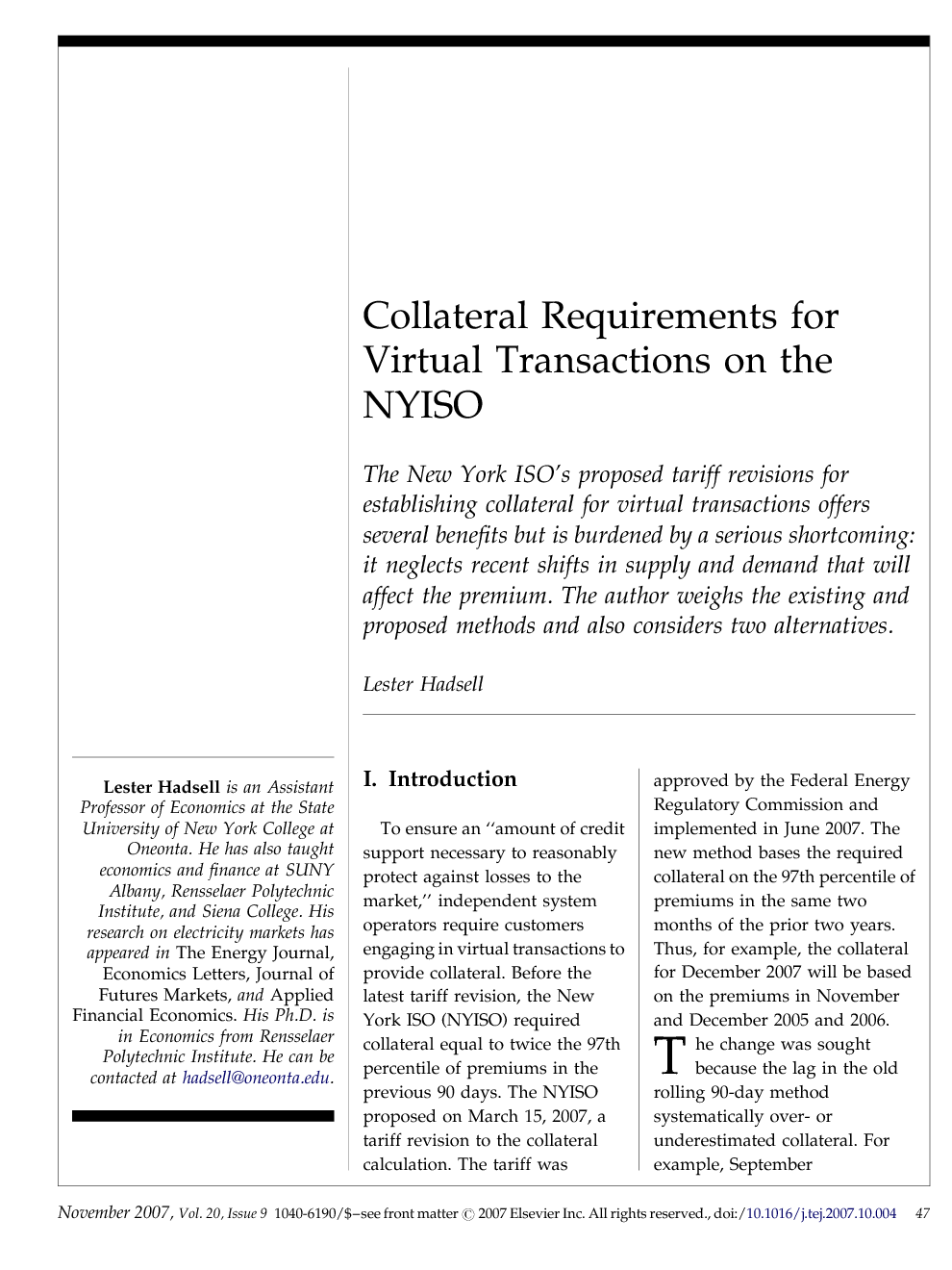 The New York ISO's proposed tariff revisions for establishing collateral for virtual transactions offers several benefits but is burdened by a serious shortcoming: it neglects recent shifts in supply and demand that will affect the premium. The author weighs the existing and proposed methods and also considers two alternatives.

To ensure an “amount of credit support necessary to reasonably protect against losses to the market,” independent system operators require customers engaging in virtual transactions to provide collateral. Before the latest tariff revision, the New York ISO (NYISO) required collateral equal to twice the 97th percentile of premiums in the previous 90 days. The NYISO proposed on March 15, 2007, a tariff revision to the collateral calculation. The tariff was approved by the Federal Energy Regulatory Commission and implemented in June 2007. The new method bases the required collateral on the 97th percentile of premiums in the same two months of the prior two years. Thus, for example, the collateral for December 2007 will be based on the premiums in November and December 2005 and 2006. The change was sought because the lag in the old rolling 90-day method systematically over- or underestimated collateral. For example, September requirements were based on June, July, and August, setting the collateral higher than it should have been, while June was based on March, April, and May, setting the collateral lower than it should have been. Such incorrect collateral created two problems: it exposed the ISO to credit risk (in the case of the June example) and potentially limited participation in the market by raising the cost of virtual transactions (in the case of the September example). The latter problem may be responsible, in part, for the failure of day-ahead and real-time price convergence in New York. Although a change to the rolling 90-day method was warranted, we argue that the most recent revision is not an appropriate – or at least not the best – method of calculating collateral. While it is in some ways better than the previous method, in other ways it is worse. Overall, the new method relies too heavily on historical patterns while neglecting recent shifts in supply and demand. Neglecting recent shifts in supply and demand (due, for example, to rapidly changing input fuel prices) opens the ISO to the potential for seriously over- or underestimating the required collateral. Furthermore, as we show below, the 97th percentile level places too high a level of collateral requirement with little additional protection for the ISO against default. Lowering this level to the 90th percentile protects the ISO against losses (the primary goal as stated in the tariff proposal) while also lowering participation costs to traders.1 While the calculations we present below to illustrate these points are specific to the NYISO, our findings provide a general lesson for ISOs, as FERC does not have a standard policy regarding VT collateral requirements (CAISO, 2006; also see CAISO, 2007, for a detailed comparison of current requirements). Requiring too high a level of collateral for virtual transactions can unnecessarily inhibit participation in wholesale markets which can lead to manipulation, inefficient pricing, and poor performance.

Although ISOs will never be fully able to escape the credit risks associated with virtual trading as long as price spikes are unpredictable, ISOs have to balance the need to protect themselves from this risk against the goal of encouraging participation in the market. Any method of establishing collateral will have its shortcomings as well as its virtues. None of the sampling methods considered in this article is a clear winner – it depends on peak vs. off-peak, one year to the next. But it does seem clear that, regardless of the method chosen, the level of excess collateral required can be greatly reduced without a large increase in credit risk to the ISO by reducing the percentile used to calculate the price delta. Given the evidence discussed here, recommendations are that the NYISO lower its percentile level from the current 97th to 90 or lower and consider treating peak and off-peak hours separately. While specific to the NYISO, the results discussed in this article will be of interest to other ISOs (PJM for instance, which uses a 97th percentile level) as they determine the proper balance in setting collateral levels of protecting the ISO against losses and encouraging participation in virtual transactions.