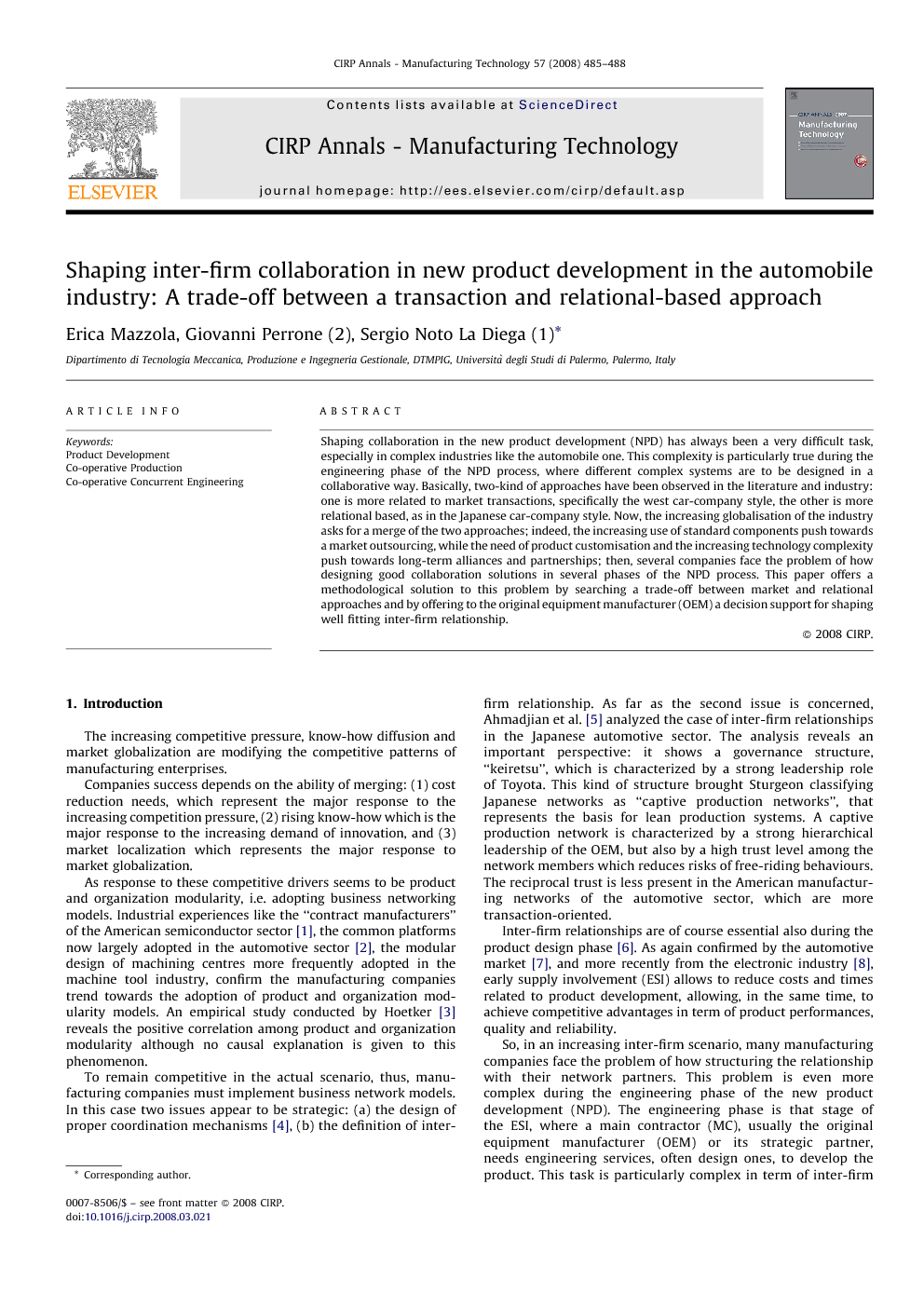 Shaping collaboration in the new product development (NPD) has always been a very difficult task, especially in complex industries like the automobile one. This complexity is particularly true during the engineering phase of the NPD process, where different complex systems are to be designed in a collaborative way. Basically, two-kind of approaches have been observed in the literature and industry: one is more related to market transactions, specifically the west car-company style, the other is more relational based, as in the Japanese car-company style. Now, the increasing globalisation of the industry asks for a merge of the two approaches; indeed, the increasing use of standard components push towards a market outsourcing, while the need of product customisation and the increasing technology complexity push towards long-term alliances and partnerships; then, several companies face the problem of how designing good collaboration solutions in several phases of the NPD process. This paper offers a methodological solution to this problem by searching a trade-off between market and relational approaches and by offering to the original equipment manufacturer (OEM) a decision support for shaping well fitting inter-firm relationship

The increasing competitive pressure, know-how diffusion and market globalization are modifying the competitive patterns of manufacturing enterprises. Companies success depends on the ability of merging: (1) cost reduction needs, which represent the major response to the increasing competition pressure, (2) rising know-how which is the major response to the increasing demand of innovation, and (3) market localization which represents the major response to market globalization. As response to these competitive drivers seems to be product and organization modularity, i.e. adopting business networking models. Industrial experiences like the “contract manufacturers” of the American semiconductor sector [1], the common platforms now largely adopted in the automotive sector [2], the modular design of machining centres more frequently adopted in the machine tool industry, confirm the manufacturing companies trend towards the adoption of product and organization modularity models. An empirical study conducted by Hoetker [3] reveals the positive correlation among product and organization modularity although no causal explanation is given to this phenomenon. To remain competitive in the actual scenario, thus, manufacturing companies must implement business network models. In this case two issues appear to be strategic: (a) the design of proper coordination mechanisms [4], (b) the definition of inter-firm relationship. As far as the second issue is concerned, Ahmadjian et al. [5] analyzed the case of inter-firm relationships in the Japanese automotive sector. The analysis reveals an important perspective: it shows a governance structure, “keiretsu”, which is characterized by a strong leadership role of Toyota. This kind of structure brought Sturgeon classifying Japanese networks as “captive production networks”, that represents the basis for lean production systems. A captive production network is characterized by a strong hierarchical leadership of the OEM, but also by a high trust level among the network members which reduces risks of free-riding behaviours. The reciprocal trust is less present in the American manufacturing networks of the automotive sector, which are more transaction-oriented. Inter-firm relationships are of course essential also during the product design phase [6]. As again confirmed by the automotive market [7], and more recently from the electronic industry [8], early supply involvement (ESI) allows to reduce costs and times related to product development, allowing, in the same time, to achieve competitive advantages in term of product performances, quality and reliability. So, in an increasing inter-firm scenario, many manufacturing companies face the problem of how structuring the relationship with their network partners. This problem is even more complex during the engineering phase of the new product development (NPD). The engineering phase is that stage of the ESI, where a main contractor (MC), usually the original equipment manufacturer (OEM) or its strategic partner, needs engineering services, often design ones, to develop the product. This task is particularly complex in term of inter-firm relationship, because the object of the transaction is a specialised service. This paper addresses such a problem. In particular, Section 2 reviews the principal theoretical approaches that support inter-firm relationship design; Section 3 describes the proposed methodological approach to shape collaboration in the engineering phase of product development. Finally, Section 4 reports a case study, taken from the automotive industry, of the methodological approach described in Section 3, which shows how it would be possible to build a decision support system (DSS) supporting the MC in shaping the collaboration in the engineering phase of the product development.

In order to clarify the proposed approach, we have developed an application from a real industrial case. This case study has been developed within an industrial research project involving a relevant OEM in the Italian automotive industry. For sake of conciseness, inhere we just report the results of the proposed approach application to the case study. We have considered a case of a car restyling project, where the engineering phase consists of the design of the following systems (tasks): electric/electronic system, external definitions, passenger area and informative system. With the help of the MC design team, the evaluations reported in Table 6 have been associated to each OET criteria discussed in Table 1.Let us focus now on the passenger area task. By applying the fuzzy reasoning of Table 3, the following results are obtained: a MOL is low with membership degree of 0.75; a MOL is high with membership degree of 0.65; a MOL is very low with membership degree of 0.6; a MOL is very high with membership degree of 0.6.Thus, with an activation degree of 0.75 the MC should choose a Low MOL, i.e. a partnership, as solutions to realize the passenger area task. Four distinct suppliers where available for that task, namely Sy, Sk, Sw, Sz. Accordingly to the suppliers evaluation presented in Table 4 and Table 5, Fig. 1 reports the suppliers clustering.As the reader can notice, the MC should choose the supplier Sz because of it is in accordance with the OET evaluation. Thus, a partnership inter-firm relation will be undertaken. In case Sz would not be available, the MC should locate a supplier close to a low MOL, perhaps Sk. In this case, the MC should decide whether to undertake a partnership relation (task supremacy) or an outsourcing one (supplier supremacy). Indeed, the task evaluation would suggest a less market oriented relationship, while the supplier assessment a more market oriented one; in this case the MC would weight task importance in front of supplier value and decide what kind of inter-firm relationship to build. In this way, our hybrid approach allow to take into consideration the most important issues in inter-firm relationship. The case study well clarifies the spirit of the proposed methodological approach, that is a decision making system aiming at helping MC in structuring inter-firm relations well fitting transactions nature and suppliers attitude. The proposed method will be implemented through a Decision Support System within an ICT platform for Supplier Relationship Management.