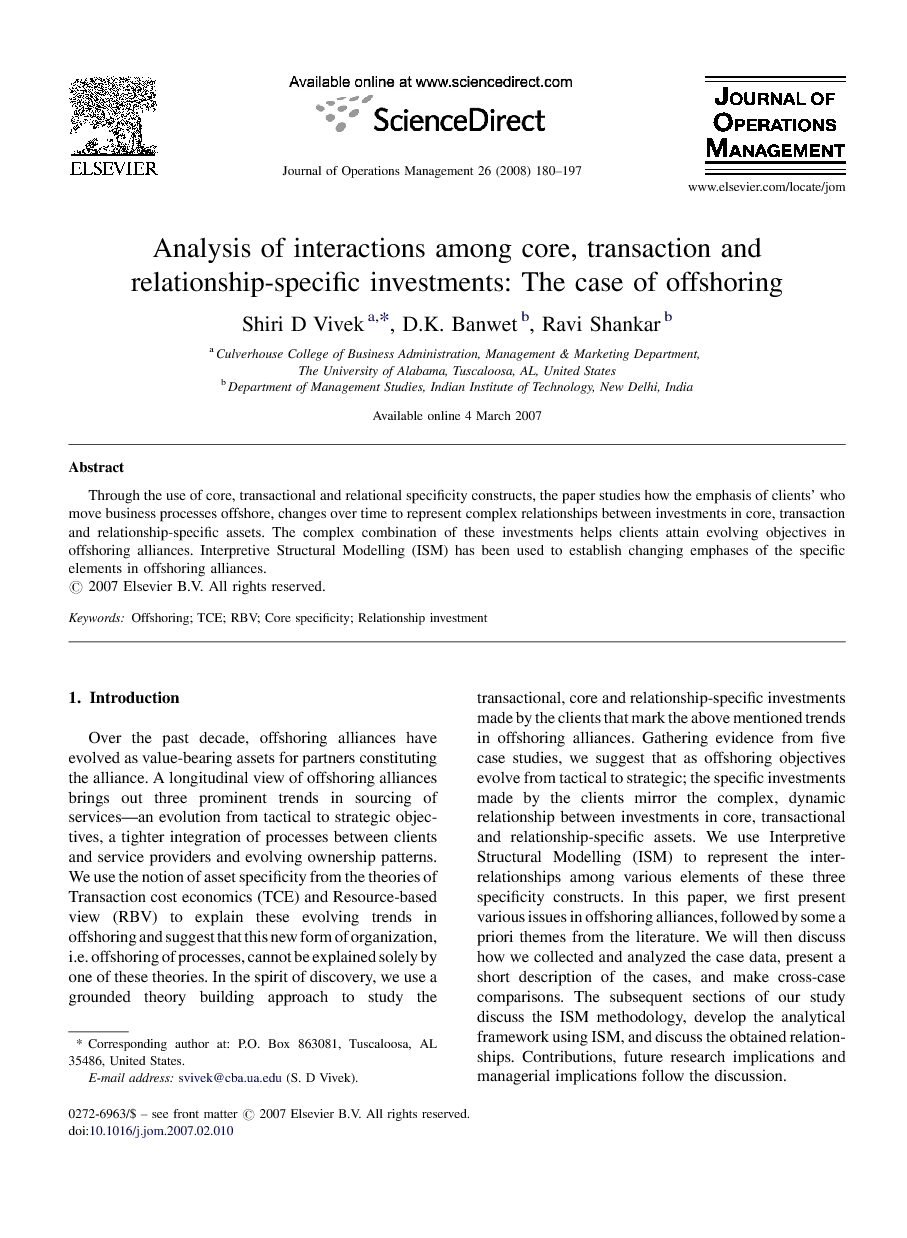 Through the use of core, transactional and relational specificity constructs, the paper studies how the emphasis of clients’ who move business processes offshore, changes over time to represent complex relationships between investments in core, transaction and relationship-specific assets. The complex combination of these investments helps clients attain evolving objectives in offshoring alliances. Interpretive Structural Modelling (ISM) has been used to establish changing emphases of the specific elements in offshoring alliances.

Over the past decade, offshoring alliances have evolved as value-bearing assets for partners constituting the alliance. A longitudinal view of offshoring alliances brings out three prominent trends in sourcing of services—an evolution from tactical to strategic objectives, a tighter integration of processes between clients and service providers and evolving ownership patterns. We use the notion of asset specificity from the theories of Transaction cost economics (TCE) and Resource-based view (RBV) to explain these evolving trends in offshoring and suggest that this new form of organization, i.e. offshoring of processes, cannot be explained solely by one of these theories. In the spirit of discovery, we use a grounded theory building approach to study the transactional, core and relationship-specific investments made by the clients that mark the above mentioned trends in offshoring alliances. Gathering evidence from five case studies, we suggest that as offshoring objectives evolve from tactical to strategic; the specific investments made by the clients mirror the complex, dynamic relationship between investments in core, transactional and relationship-specific assets. We use Interpretive Structural Modelling (ISM) to represent the inter-relationships among various elements of these three specificity constructs. In this paper, we first present various issues in offshoring alliances, followed by some a priori themes from the literature. We will then discuss how we collected and analyzed the case data, present a short description of the cases, and make cross-case comparisons. The subsequent sections of our study discuss the ISM methodology, develop the analytical framework using ISM, and discuss the obtained relationships. Contributions, future research implications and managerial implications follow the discussion. A large number of studies illustrate the importance of global sourcing of goods as a tool for competitive advantage, but research in services outsourcing is in its nascent stages (Lovelock and Yip, 1996). Previous studies have focused on foreign direct investment in service industries (e.g., Weinstein, 1977 and Terpstra and Yu, 1988) and foreign market entry modes for service companies (e.g., Erramilli, 1990, Erramilli and Rao, 1990 and Erramilli and Rao, 1993). In the 1990s, locational and ownership aspects of internal sourcing of services were examined by Murray and Kotabe (1999). They found that internal sourcing relationships are moderated by the level of inseparability and transaction frequency and that internal sourcing is negatively related to a service firm's market performance. While firms have accepted sourcing as a part of their strategy, there are issues and concerns around this mode of reorganization. Managers are grappling with issues such as diffusion of technology (Pries-Heje et al., 2005), limitations on firms ability to develop valuable competencies (Barthelemy, 2003), effective exit strategies (Howard, 2003 and Doyle, 2004), and most of all, operational and structural risks in administering outsourcing relationships (Hoffman, 2006, Aron and Singh, 2005 and Kakabadse and Kakabadse, 2002). The issues related to administration focus on effective phasing of outsourced processes, successful management of contracts, determining trade-offs between tight contracts, and leveraging the potential competencies resulting from a rich client-service provider relationship.

The paper attempted to study the linkages between the elements of core, transactional and relationship-specific investments made by the firms as they offshore business processes. Elements representing the three specificity constructs were identified and their linkages established on the basis of information obtained from five representative case studies. An analytical framework of these elements was then drawn through Interpretive Structural Modelling in order to identify the dynamic inter-relationships between these elements – and thus the three specificity constructs they represent – as an offshoring alliance evolves. The interrelationship of elements show that organizations are not completely unaware of threats as they try to gain competitive advantage, and at the same time do not overlook joint value by being too protective. Successful offshoring alliances create a unique combination of investments in transactional, core and relational elements, and realize the evolving objectives for offshoring as a result of these investments.