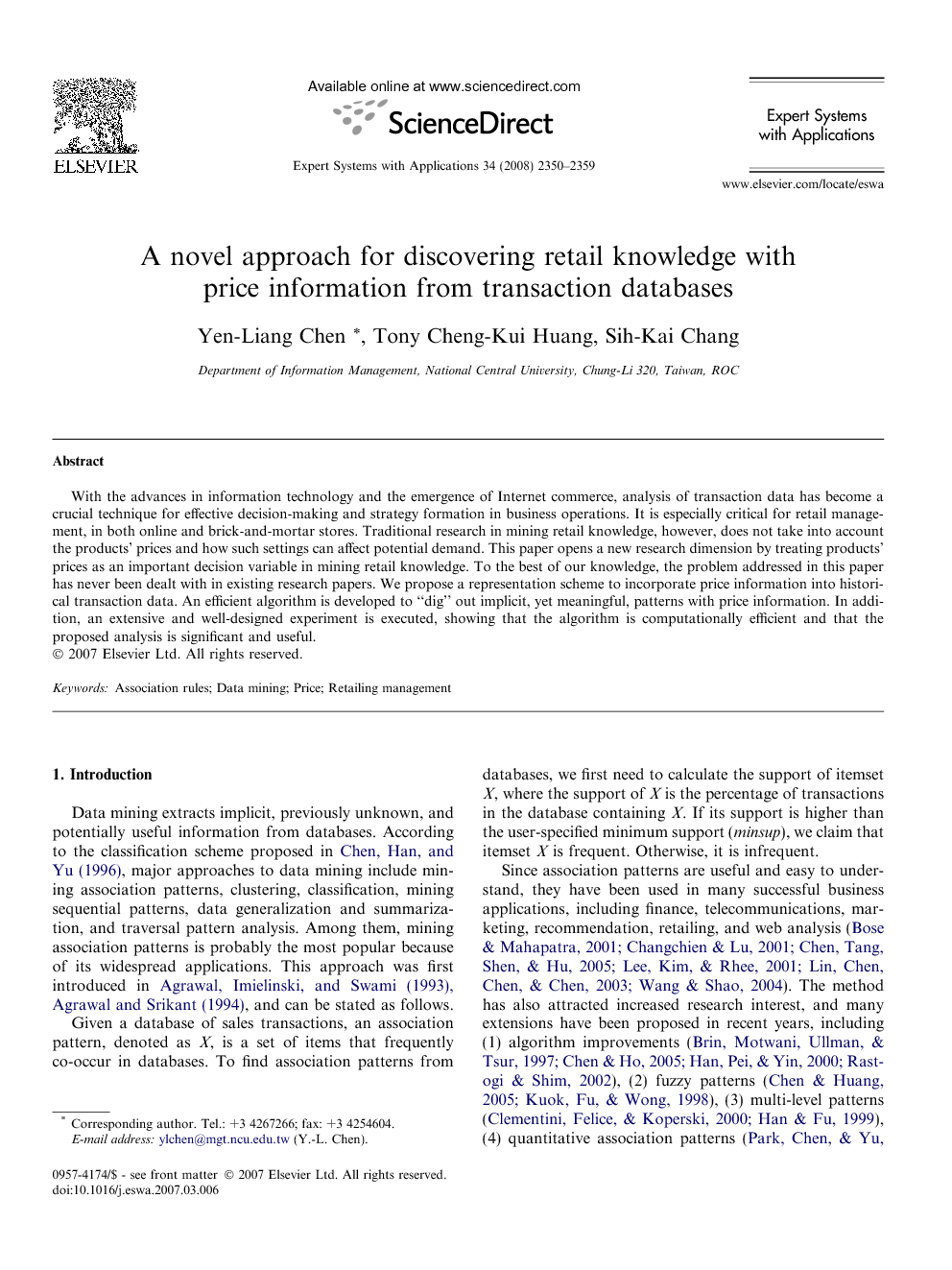 With the advances in information technology and the emergence of Internet commerce, analysis of transaction data has become a crucial technique for effective decision-making and strategy formation in business operations. It is especially critical for retail management, in both online and brick-and-mortar stores. Traditional research in mining retail knowledge, however, does not take into account the products’ prices and how such settings can affect potential demand. This paper opens a new research dimension by treating products’ prices as an important decision variable in mining retail knowledge. To the best of our knowledge, the problem addressed in this paper has never been dealt with in existing research papers. We propose a representation scheme to incorporate price information into historical transaction data. An efficient algorithm is developed to “dig” out implicit, yet meaningful, patterns with price information. In addition, an extensive and well-designed experiment is executed, showing that the algorithm is computationally efficient and that the proposed analysis is significant and useful.

With advances in information technology and Internet commerce, data-driven analysis techniques have become essential for decision-making and strategy formation in business operations. It is especially critical for retail management, in both online and brick-and-mortar stores. Traditional research on mining retail knowledge focuses on assortment planning, demand correlation analysis, and customers’ shopping behavior analysis. It does not take into account the prices of products, and how price setting can affect potential demands. This paper opens a new research dimension by treating prices of products as an important factor in mining retail knowledge. We proposed a representation scheme to represent the price levels of products. Based on this, a novel algorithm was applied to “dig” out good and/or bad child patterns. Next, we defined two new metrics, FS and QS, to measure a pattern’s relevancy. Based on these two measures, all discovered child patterns can be classified into nine categories, some of which are positive for sales, some are neutral, and some are negative. Furthermore, we proposed a statistical method to determine if parent patterns are sensitive to price changes. Finally, we used a real dataset from a retail chain store to perform an extensive experiment. The results indicated that the algorithm is computationally efficient and the discovered patterns can produce satisfactory results. To the best of our knowledge, the problem addressed in this paper has never been dealt with in existing research papers on data mining; no other research considers price information in the historical transaction data. This paper has pioneered research in this area, but there are some critical limitations. First, how the obtained patterns can be used to determine the prices of products remains unclear and needs further study. Second, if a product is a new product or if its price is seldom changed, how can we determine whether it is price-sensitive or not? These questions should be further investigated in future research.