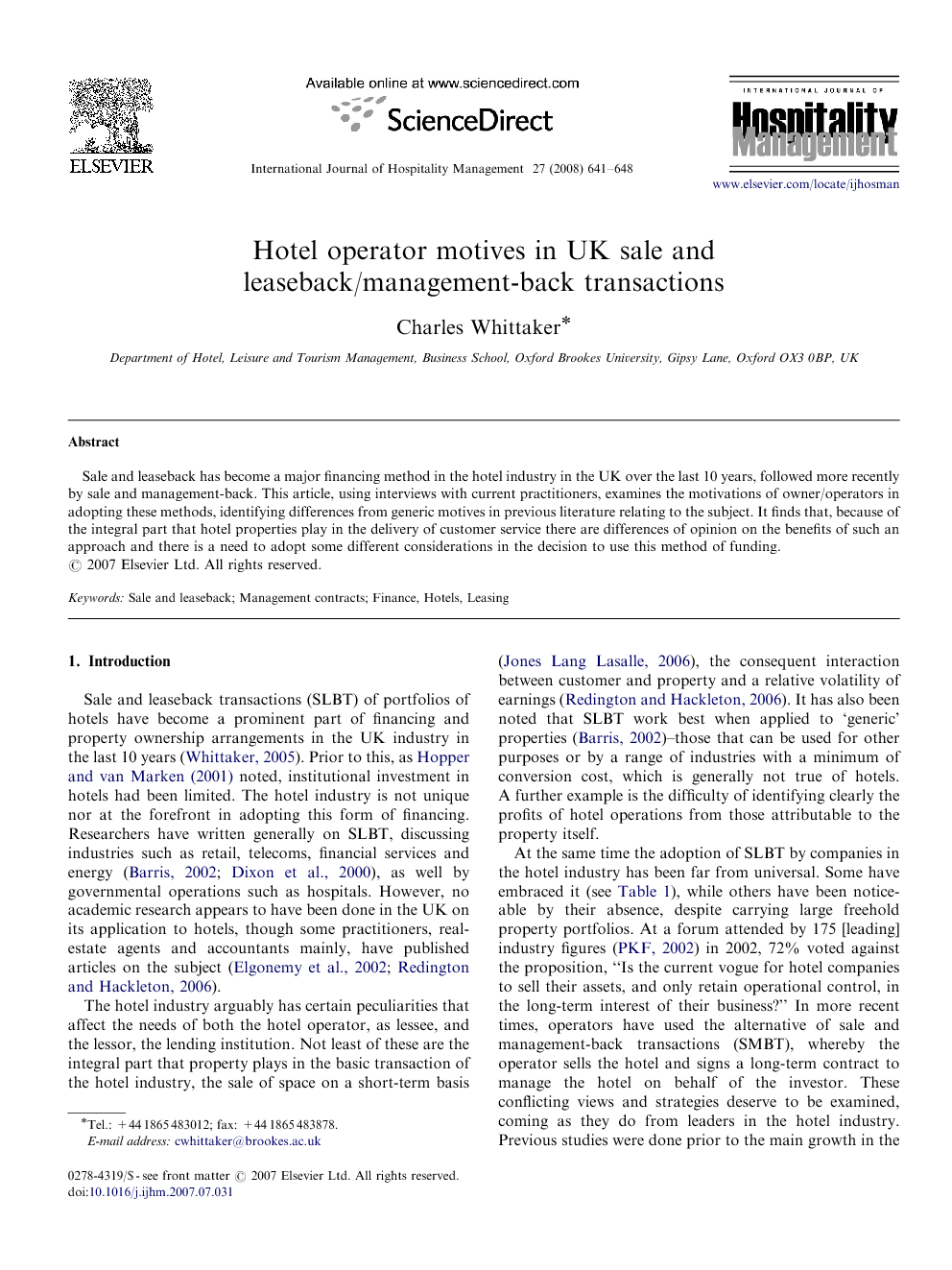 Sale and leaseback has become a major financing method in the hotel industry in the UK over the last 10 years, followed more recently by sale and management-back. This article, using interviews with current practitioners, examines the motivations of owner/operators in adopting these methods, identifying differences from generic motives in previous literature relating to the subject. It finds that, because of the integral part that hotel properties play in the delivery of customer service there are differences of opinion on the benefits of such an approach and there is a need to adopt some different considerations in the decision to use this method of funding.

Sale and leaseback transactions (SLBT) of portfolios of hotels have become a prominent part of financing and property ownership arrangements in the UK industry in the last 10 years (Whittaker, 2005). Prior to this, as Hopper and van Marken (2001) noted, institutional investment in hotels had been limited. The hotel industry is not unique nor at the forefront in adopting this form of financing. Researchers have written generally on SLBT, discussing industries such as retail, telecoms, financial services and energy (Barris, 2002; Dixon et al., 2000), as well by governmental operations such as hospitals. However, no academic research appears to have been done in the UK on its application to hotels, though some practitioners, real-estate agents and accountants mainly, have published articles on the subject (Elgonemy et al., 2002; Redington and Hackleton, 2006). The hotel industry arguably has certain peculiarities that affect the needs of both the hotel operator, as lessee, and the lessor, the lending institution. Not least of these are the integral part that property plays in the basic transaction of the hotel industry, the sale of space on a short-term basis (Jones Lang Lasalle, 2006), the consequent interaction between customer and property and a relative volatility of earnings (Redington and Hackleton, 2006). It has also been noted that SLBT work best when applied to ‘generic’ properties (Barris, 2002)–those that can be used for other purposes or by a range of industries with a minimum of conversion cost, which is generally not true of hotels. A further example is the difficulty of identifying clearly the profits of hotel operations from those attributable to the property itself. At the same time the adoption of SLBT by companies in the hotel industry has been far from universal. Some have embraced it (see Table 1), while others have been noticeable by their absence, despite carrying large freehold property portfolios. At a forum attended by 175 [leading] industry figures (PKF, 2002) in 2002, 72% voted against the proposition, “Is the current vogue for hotel companies to sell their assets, and only retain operational control, in the long-term interest of their business?” In more recent times, operators have used the alternative of sale and management-back transactions (SMBT), whereby the operator sells the hotel and signs a long-term contract to manage the hotel on behalf of the investor. These conflicting views and strategies deserve to be examined, coming as they do from leaders in the hotel industry. Previous studies were done prior to the main growth in the hotel industry and did not attempt to address the peculiarities of any particular industry, while many tended to focus on the impact on share prices (Devaney and Lazieri, 2004; Fisher, 2004) rather than the motives in adopting the process.A clearer understanding of the issues will hopefully provide a framework against which hotel executives can formulate their decision-making in this area, and promote a greater understanding between hotel operators and the investment community. It will also make such knowledge available to the wider academic community, filling a gap in the current literature. This article, therefore, aims to identify and analyse the motives of hotel operators and thus the underlying drivers of SLBT analysing industry responses to generic frameworks in earlier studies. As a result it is hoped to provide greater understanding of those motives and make recommendations that might inform future decisions. Table 1 although not comprehensive, provides an indication of the size of transactions year by year and the parties to the transactions.