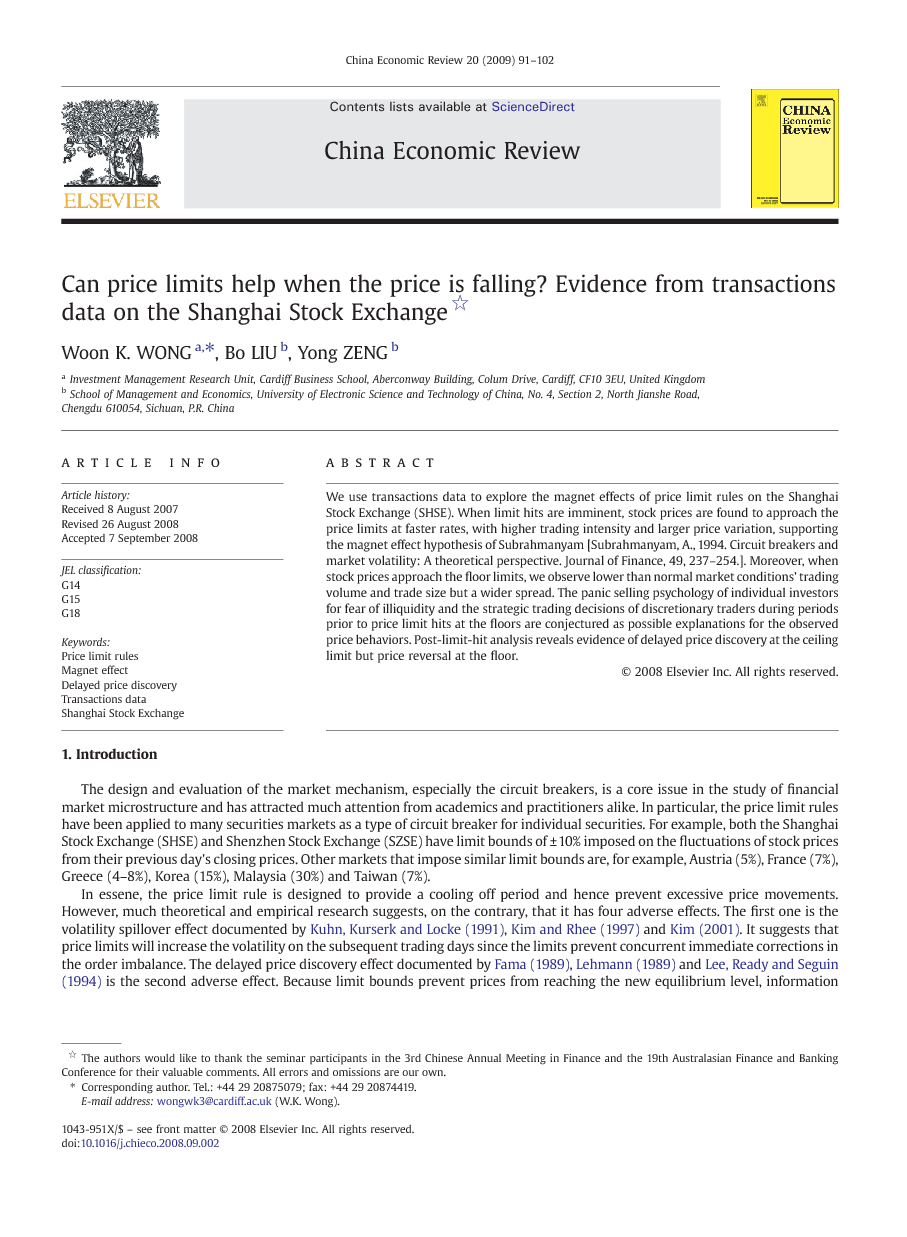 We use transactions data to explore the magnet effects of price limit rules on the Shanghai Stock Exchange (SHSE). When limit hits are imminent, stock prices are found to approach the price limits at faster rates, with higher trading intensity and larger price variation, supporting the magnet effect hypothesis of Subrahmanyam [Subrahmanyam, A., 1994. Circuit breakers and market volatility: A theoretical perspective. Journal of Finance, 49, 237–254.]. Moreover, when stock prices approach the floor limits, we observe lower than normal market conditions’ trading volume and trade size but a wider spread. The panic selling psychology of individual investors for fear of illiquidity and the strategic trading decisions of discretionary traders during periods prior to price limit hits at the floors are conjectured as possible explanations for the observed price behaviors. Post-limit-hit analysis reveals evidence of delayed price discovery at the ceiling limit but price reversal at the floor.

The performance of price limit rules is always the focus of policy making and academic research. This paper makes use of transactions data to study the market dynamics and the stylized facts that accompany the magnet effects of the price limit system in the Shanghai Stock Exchange. Consistent with Subrahmanyam (1994), when limit hits are imminent, we find stock prices approach limit bounds at faster rates and with increased volatility and higher trade frequency. A formal regression analysis on the AR(3)-GARCH(2,2) filtered time series returns with sampling characteristic adjustment confirms our findings. We also observe asymmetry effects between limit hits at the ceiling and floor bounds. Specifically, we find that, as stock prices approach the floor limits, the volume and trade size are lower than normal market conditions but the bid-ask spread is wider. We conjecture that this is due to the panic selling activities of uninformed and risk-averse individual investors when stock prices falls towards the floor limits. This is supported by our post-limit-hit analysis at the floor limits, where we find price reversal. Evidence of price reversal indicates that aggressive selling at floor limit hits is irrational and sub-optimal. Finally, we remark that our research makes an interesting and relevant contribution to the arguments for launching new equity index futures and options markets in Chinese stock markets this year. These new derivatives should at least in theory provide the investors with effective tools to hedge the downside risks of their equity portfolios, thus reducing the tendency to sell frantically as stock prices fall towards lower limit bounds.