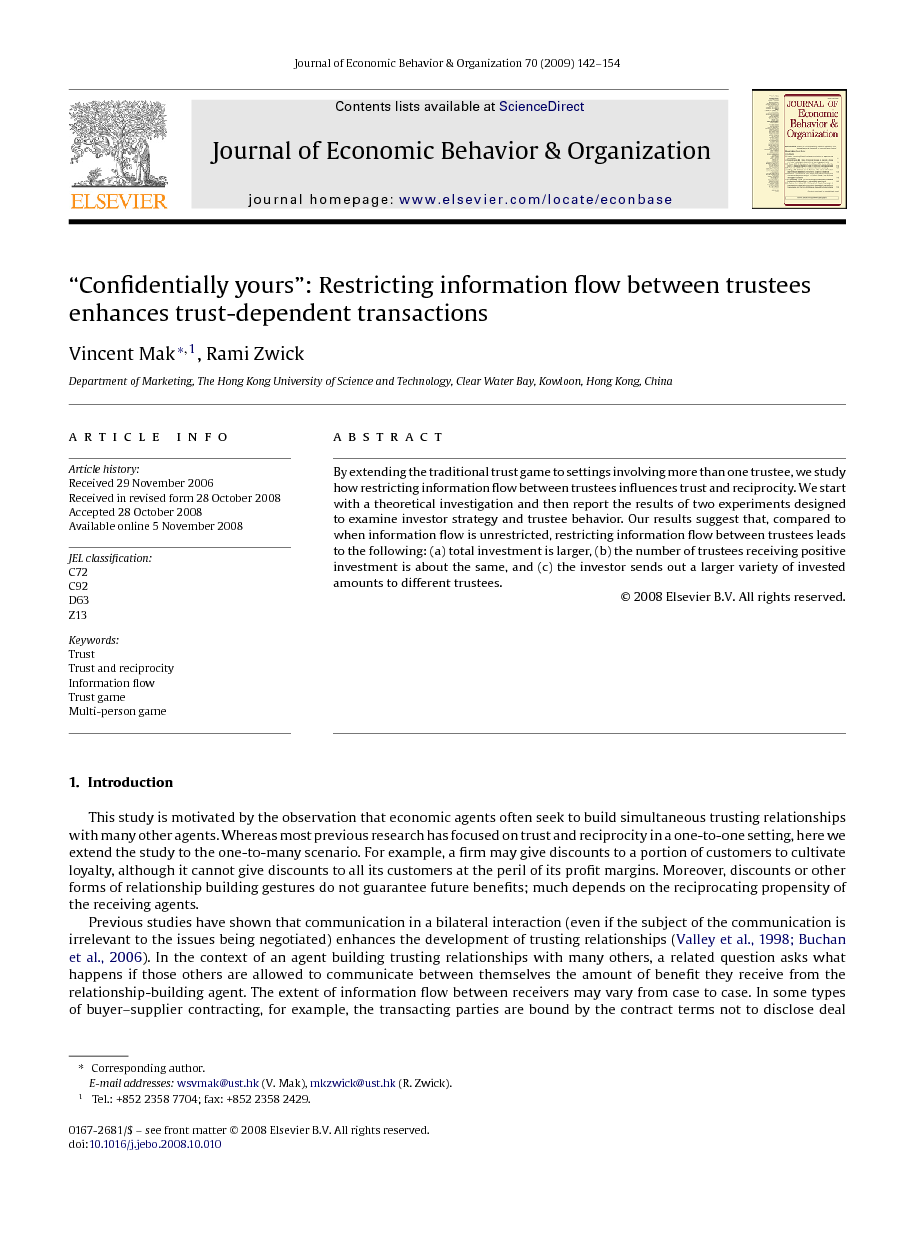 By extending the traditional trust game to settings involving more than one trustee, we study how restricting information flow between trustees influences trust and reciprocity. We start with a theoretical investigation and then report the results of two experiments designed to examine investor strategy and trustee behavior. Our results suggest that, compared to when information flow is unrestricted, restricting information flow between trustees leads to the following: (a) total investment is larger, (b) the number of trustees receiving positive investment is about the same, and (c) the investor sends out a larger variety of invested amounts to different trustees.

This study is motivated by the observation that economic agents often seek to build simultaneous trusting relationships with many other agents. Whereas most previous research has focused on trust and reciprocity in a one-to-one setting, here we extend the study to the one-to-many scenario. For example, a firm may give discounts to a portion of customers to cultivate loyalty, although it cannot give discounts to all its customers at the peril of its profit margins. Moreover, discounts or other forms of relationship building gestures do not guarantee future benefits; much depends on the reciprocating propensity of the receiving agents. Previous studies have shown that communication in a bilateral interaction (even if the subject of the communication is irrelevant to the issues being negotiated) enhances the development of trusting relationships (Valley et al., 1998 and Buchan et al., 2006). In the context of an agent building trusting relationships with many others, a related question asks what happens if those others are allowed to communicate between themselves the amount of benefit they receive from the relationship-building agent. The extent of information flow between receivers may vary from case to case. In some types of buyer–supplier contracting, for example, the transacting parties are bound by the contract terms not to disclose deal information to third parties. In other examples, such as a grocery store giving out discounts to some customers, the customers are free to communicate to others about the favor they receive. Our main objective is to study how information flow influences the amount and distribution of resources invested in relationship building in the one-to-many setting. We attempt to abstract the relationship-building aspects of the above-mentioned examples into a setting involving a trusting agent and a number of potentially reciprocating agents to study agent behavior in this setting through an extension of the trust game or investment game first proposed by Berg et al. (1995). In the original trust game, an investor can choose to donate any part or none of an endowment to a trustee. The donation is tripled when it reaches the trustee, who then decides upon sending back an amount (or not sending any amount) to the investor. After this, the game, in the one-shot version, ends. Both players are anonymously and randomly matched. Trust and reciprocity are said to be observed in the sense that players seldom follow the subgame perfect equilibrium strategy of not giving any money to the other party and trustees often reciprocate positively. Our extension follows Berg et al.’s basic settings except that the number of trustees becomes N > 1. We consider (a) investors’ strategy in deploying investments, and (b) trustees’ responding behavior, under conditions that vary in two parameters: the value of N and the information condition under which every trustee either knows the amount of investment received by every other trustee (the public information condition) or knows only the amount received by herself (the private information condition). When information flow between trustees is restricted in this sense, we propose that, if the investor considers her task based on a simplified, “baseline” model of expected trustee reciprocity, the optimal strategy of a risk-neutral investor is, in general, to send positive investment packages at no more than two different levels2 to some (but not necessarily all) of the trustees, while the remaining trustee(s) receive nothing. We then investigate the effect of non-baseline concerns including investor risk aversion and, under the public information condition, (a) how reciprocity is influenced by uneven distribution of investments, (b) trustees free riding on the moral obligation to reciprocate, and (c) distributional fairness. In our theoretical development, we argue that the basic characteristics of the investor's optimal strategy in the baseline model would be preserved even if these additional concerns are included. We then report the results of two experiments designed to investigate investor strategy and trustee behavior. Both theoretical reasoning and experimental evidence suggest that, compared with the public information condition, when information flow between trustees is restricted, (a) total investment is larger, (b) the number of trustees receiving non-zero investment is about the same, and (c) the investor sends out a larger variety of invested amounts to different trustees.

Experiment 2 offers support to our conjectures regarding trustee behavior. Fundamentally, it shows that, under the public information condition, a trustee's reciprocating behavior is dependent not only on her received amount but also on other trustees’ received amounts. The data are also largely consistent with Trustee hypotheses 1 and 2, which are respectively about trustees’ reactions to a non-uniform investment distribution and moral obligation free riding. Investor choices in this experiment reveal less inclination to trust than in Experiment 1, but it must be noted that the natures and formulation of the tasks are quite different in the two experiments. Total investment, meanwhile, increases with N, which agrees with the results in Experiment 1.